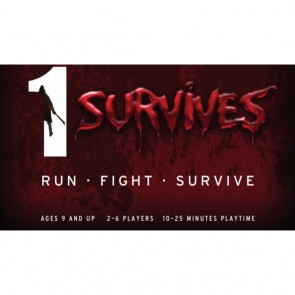 The motor splutters to a stop. You drift towards the Island. That Island. For years there were stories, rumours, old wives tales. The kind of tale you would trot out round the campfire to scare the kids. No one believed it. Still, no smoke without fire. This school trip was always a bad idea and now you are stuck here on this island, its getting dark and you have this weird feeling you are being watched

1 Survives is a survival horror themed card game from a new Scottish company Tip The Table games. Each player steps into the shoes of a member of a stranded school trip, spread across an island seemingly deserted but rumoured to be home to a maniac! That's just stories though. Isn't it?

As you set out from your starting locations to find a way off the island, something attacks you from the shadows. Thankfully weapons are plentiful on this Island and the attacker is fended off into the darkness. Your weapon breaks when you attack and you must find another or run away if you are attacked again! 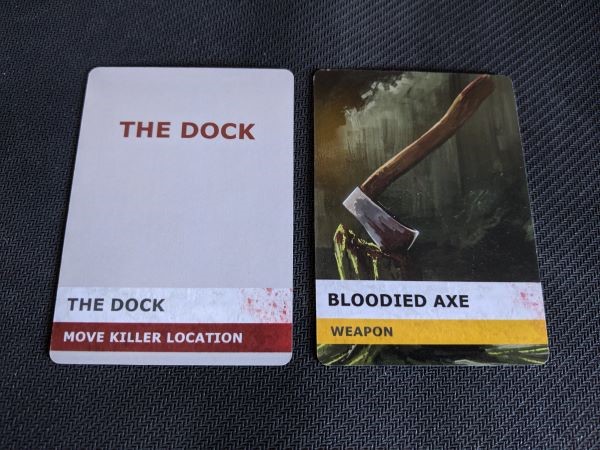 Move the Killer to the location of your 'friends. Hope they don't have an Axe to fend them off.

You run anyway, hoping to find something, anything to get you off this cursed place. Desperately you search the Docks, round the Plateau and up to the Radio Antenna. Maybe you can string together a molotov from what is lying around. A radio signal to call for help, but the battery is dead. The boat could live again but you have no fuel. You search, you hide, you run. 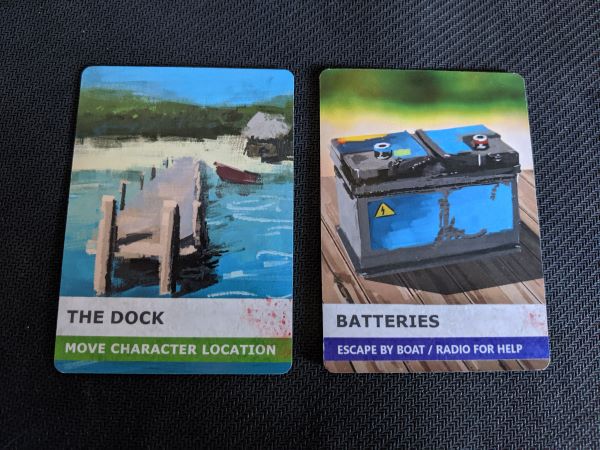 Move location to avoid being attacked, find equipment to help you get off the island.

Still they come from the darkness, relentless, ever present. In a moment of frenzied attack you think you recognise them? Did you bring the killer with you? Was this Island abanadoned after all. No time to think, they are coming. It's you or them and you would much rather it be them 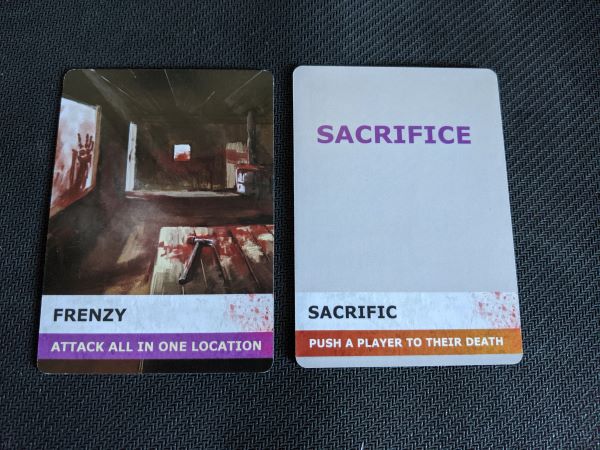 The killer attacks in a frenzy, maybe you should push your friend to their death to get away!

You stand bloodied but not beaten. Some of you have survived, others lie dead where they fell. The helicopter is approaching, the radio signal summoning help. The others have seen you do terrible things, maybe you should just finish them off. Be the only one who survives.

1 Survives does give these moments of emergent narrative over the course of its runtime, giving spark to what might otherwise be a pretty meat & potatoes game. The back and forth of attack and defence steadily whittles down everyone's ability to stay in the game, eliminating players one by one as they try to get off the island or be last person standing.

I'm not the biggest fan of player elimination and in this case it does feel like you could be taken out pretty early one through a bad card draw. The game strongly incentivses going after the weakest player, the person with the least cards, as they are less likely to be able to defend themselves. That sticks within the theme of the gnre for sure, but it can feel bad when you are the one being railed on. The game is pretty short though, so you can always look forward to getting your revenge!

Despite the short run time I did feel 1 Survives got a little sluggish towards the endgame as the last couple of players either desperately search for the final piece of a set to get off the Island or try and take each other out by landing the killing blow. There is room for cooperation here which is interesting as one player maybe discards the last piece of equipment the other needs to get the boat going, send out a radio signal etc. Being able to draw from the top card of the discard pile like this opens up some interesting situations, and the co-op element is a nice addition.

When there are a good number of players 1 Survives shines, giving you great little stories as you run around the island defending yourself, pushing others in harms way and generally leaning into the tropes of the genre. It's mix of take that, set collection and player elimination isn't for me personally but the mechanics do support the theme pretty well. As a game to play on a cold winter's night, when there is definitely no one else in the house, it's a decent enough filler game with some good art that evokes the theme of the films it seeks to emulate.

A copy of 1 Survives was provided by Tip The Table games for this preview. Some art is incomplete or not final. Iain was part of a playtest for the game earlier in the year. The game is on Kickstarter now.

Shellhead replied the topic: #302275 08 Oct 2019 13:00
I rarely Kickstart anything, though I have enjoyed certain Kickstarter products that became available after the Kickstarter. But this game is enticing. The artwork is excellent. I don't normally like filler games, but a quick, lethal, multi-player game sounds good. Thanks to the weak pound, it would only cost me $22 USD. That's a little high for a filler, but if it's that rare good filler game, it will be well worth the price.

thegiantbrain replied the topic: #302382 11 Oct 2019 12:48
Thanks for supporting them. Even though I wasn't totally sold it, I think a good review should let you decide whether you want to buy the game or not, even if the reviewer doesn't.

Shellhead replied the topic: #303027 01 Nov 2019 12:00
1 Survives just barely met the funding goal within the final half hour before deadline. I'm surprised to hear that they will be shipping the games by December 2019, but I suppose this game doesn't need a complicated production run. It's a deck of 110 cards, a folded sheet of rules with a map, and a double-size tuckbox.
Read More...