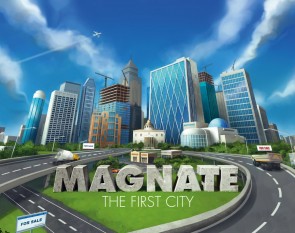 Games allow us to step into roles we never thought we would get a chance to experience: explorer, investigator, wizard, space captain. These roles tend towards the heroic, giving us a sense of accomplishment as we save the world, defeat the villain, liberate the populace. Sometimes a game comes along that allows us to experience the other side of the coin: to manipulate, exploit and subjugate. Magnate: The First City, the debut game from designer James Naylor allows us to do just this, putting us in the shoes of someone with only one thing on their mind. Money. Lots of Money.

With a mere 2 million dollars to your name you set out with dreams of becoming a property developer like your father before you. Buying up available plots you develop them into houses, offices, retail and industrial units. What you build will be influenced by the surrounding neighbourhoods, after all there is no point in erecting a shopping mall if no one is around to buy anything. Some plots will be better for one type of building over another: no one appreciates an industrial estate in a nature reserve, but living there may definitely be on the cards. 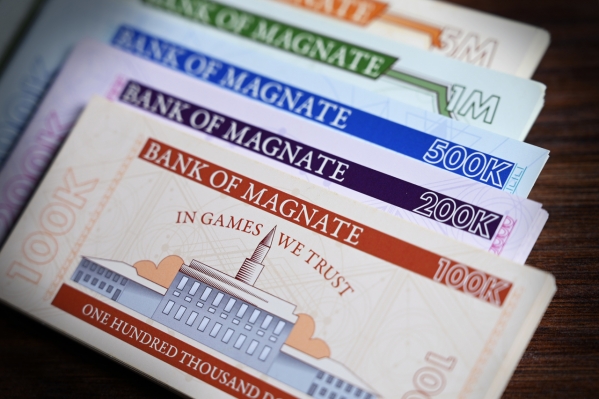 You’ve built a portfolio but your buildings stand empty. It’s time to get yourself some saps, I mean tenants. You gather dice, pausing for a moment to consider how much of your advertising budget to spend. You roll looking to form sets of numbers based on the type of building you attract tenants to, the advertising tokens you spent guaranteeing you the numbers you need but costing you time and money to obtain. Tenants move in, rents are collected, you develop more land. You sell buildings to raise more capital. The game whips along as you look to build your property empire. 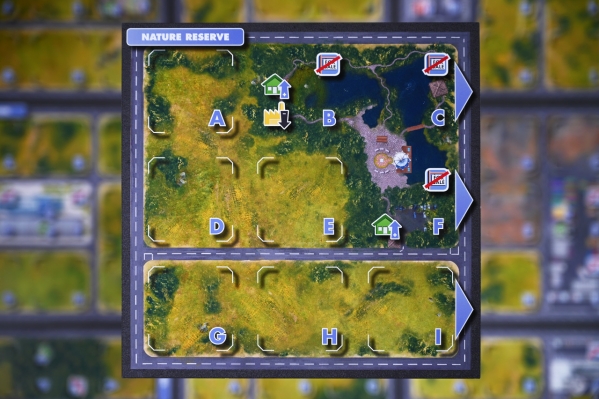 Plot B here would make it easier to attract residential tenants in plot A,D and E but harder to attract industrial tenants.
Photo provided by publisher.

These mechanics whilst competently executed are not what should get you excited about Magnate. The core of Magnate, the beating heart of the game, the god that sits on high is the great Property Market. In Magnate I can’t buy your property, nor can I sell you mine. Bar buying up a piece of land you want or causing you tenancy issues via my choice of building, there is little in the way of direct player interaction. For once that doesn’t bother me because the property market is a thing of brutal beauty and sadistic simplicity. 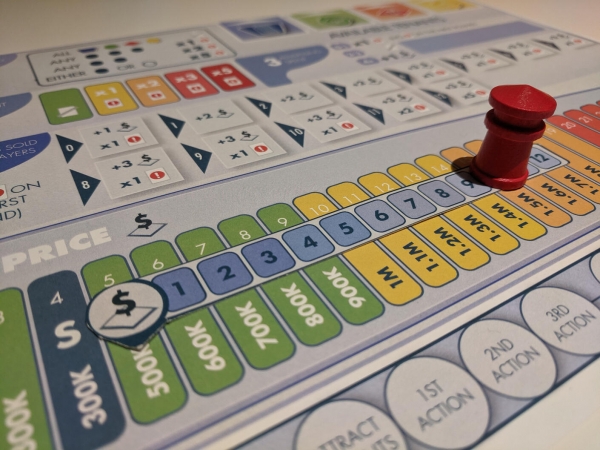 In this photo the land price has gone up to 500k. The red crash marker has yet to move.
Photo provided by publisher.

The property market is an AI reacting to what players do, responding to their inputs. Land price starts off at a mere $300k but as the game progresses it rockets: spend advertising, it goes up, sell a plot, it goes up. As we all know prices cannot go up forever. As the price swells, as the bubble expands, imperfections begin to show, it threatens to burst. The land price marker rises.

The price marker is more of a strip than a token. Upon the strip lies a crash token starting at 10. If you run out of tenants, if the price of the land rises too high, if you spend too little advertising, don’t sell enough land, or too much, the risk increases. The risk is always increasing. Risk cards are drawn sometimes causing the crash marker to move, but always adding to the depth of the fall to come. The bubble bursts eventually, inevitably, there is no escaping the great correction. Sell at the right moment and you’ll make a fortune, fail to prognosticate and you’ll be left with mere thousands instead of the millions you were entitled to, the land price having crashed past where it started. In the end all that matters is the money. 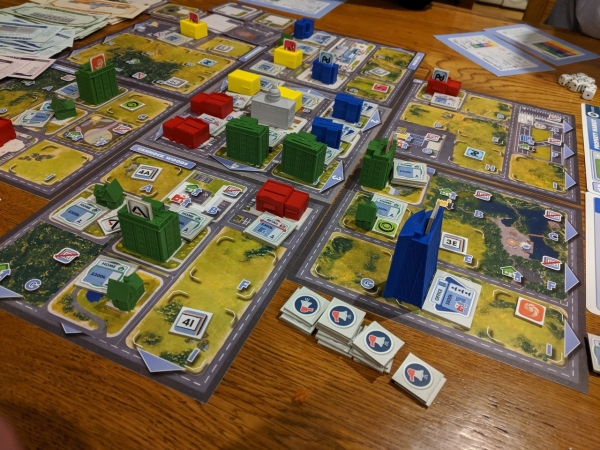 The game in full flow. The plastic buildings are satisfyingly chunky.

Show me the money

Every full game I’ve played of Magnate has shaken out differently. The setup of the board makes for a shifting landscape, encouraging certain buildings over others. In doing so however the market responds. A board encouraging residential will see those tenants depleted quickly, giving risk cards more quickly and pushing other players towards non-residential buildings in order to see a better return on their investment. The property market is both precise and emergent, predictable and chaotic. You’ll come to love it and loathe it in equal measure.

I’d played Magnate in demo form a couple of times before getting this preview copy, and it didn’t really stick with me as much as it has this time out. The changes to the property market and the addition of the Risk deck have raised the game up from being an interesting idea to a fully fledged design where you really feel like you are stepping into the shoes of a slick suited property developer. James has worked hard to make a game that shines, taking on feedback, tweaking graphics and gameplay to really craft something special.

Kickstarter can be full of games that look and play the same. Magnate is different. It is a game unlike anything else I’ve played and it is exactly what Kickstarter should be for: a first time publisher stepping out onto the world stage. The emergent properties of each setup, the beautiful and terrifyingly accurate financial modelling and the pacey gameplay make this a game that I thoroughly recommend and am personally backing.

A copy of Magnate: The First City was provided by James Naylor for this review. This is a pre-Kickstarter version but is close to the final version as we understand it. James has been a guest on the cast in Episode 38. Some of the images in this post were provided by James and were taken by Ross from More Games Please, who has also been on the cast in Episode 27. I will indicate which photos are provided in the captions of the photos.

hotseatgames replied the topic: #304567 26 Nov 2019 09:00
Nice preview! I'd like to try this one. One thing I keep wondering when I see pictures of this game... the buildings seem overly large. Is this game more of a table hog than it really should be?

thegiantbrain replied the topic: #304650 29 Nov 2019 05:04
It does have a fair amount of real estate (boom tish) but they don't feel unnecessary to me. Could have been done with tiles I guess but it might not have made things as easy to grok at a glance. I'm just disappointed you can't get the lego buildings James used in earlier prototypes.
Read More...