...And Then We Died Board Game Review 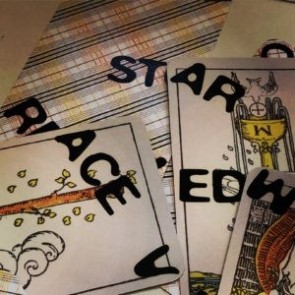 Game Name
...And Then We Died
Publisher
killjoy
Designer
Emma Larkins
There Will Be Games

Live fast, die young, and have a good sounding story.

“Today, we are gathered here to pay our last respects and say our final farewells to...us. We died last Friday in the bosom of our families...”
“Excuse me, but I recall us looking for a lost cat named Noel down by Crystal Lake during a thunderstorm.”
“Well, family is a broad term and is inclusive of loving companions including cats...”
'Loving? Pfft. That thing scratched me and bolted under an old rowboat first chance it had.”
“Anyway, we passed with quiet dignity last Friday...”
“Quiet dignity? Is that what you call it when a rowboat is struck by lightning? More like fried dingy.”
“Look, who's telling this story anyway?”
“All of us!”

...And then we died is a story telling game where the only thing for certain is that that story will end with the untimely death of everyone playing (Is there such thing as a timely death? Has anyone ever died and thought, Whew! That ended in the nick of time). The game appearance looks exactly like what our parents feared we were playing during the 80's Dungeon and Dragons days: Tarot Cards with random letters written across them. I can picture the scene...

* Mom yells down the basement stairs *
“What ya doing, Billy?”
“Just telling stories of our inevitable demise using these spooky cards with random scrawling on them”
“Uh, okay....so, will you be needing any grape kool aid?”

In video game terms, ...And Then We Died is the “Hard Mode” of story telling games. Building part of a story from a single word that you have to create from existing letters can be a challenge. As such, I would not recommend this as “starting point” storyteller game. The “Game” portion where you create the words can be a distraction from the actual storytelling to some players. Using the base rules, the current storyteller is the person who will make the next word to fuel the fable but I often found players actively searching for words while the storyteller worked to engage them with his tale. Speaking of the rules, they have a distinct “hippy” vibe. If I had to summarize them, it would be “Try this and if it doesn't work for your group, that's cool. Do what ya want, man, it's about the experience. Peace, Love and an eventual death.”

The game can soar, the game can stumble, and it can take you to unexpected places in both emotion and plot. Sometimes, it needs a, for lack of a better word, moderator (or maybe a death master)? Someone to focus your group, encourage a particular player, or nudge the game along. Story telling games are usually 90% the group you play it with. If you read this review and think “I know EXACTLY the group I'd love to try this with!” then you don't need any further commentary from me. If you've had limited or zero success with your group and games of weaving words, I don't see ...And Then We Died changing that.

Besides having to resist the urge to start every game by saying “I want to tell you about the time I almost died.” one of the only things that I would change about the production is that I wish the deck of cards it came with were actually a full 78 card tarot deck. I just like the idea of stumbling across a classic deck of Tarots haunted by spirits that have scribbled clues to how it all ended.

I'm going to get a little somber here. This is a game about death, that thing most people avoid thinking about as much as possible during life. Facing your own mortality on game night might not be everyone's idea of a relaxing experience. Would I bring out this game to a group where a member recently had a friend/relative pass away? Probably not. Did I just use the term “pass away” instead of Died because it insulates the cold, hard finality of death? Absolutely. Could ...And Then We Died be a catalyst for accepting death, talking about the emotions involved and helping us move on? Hmmm, now who has a distinctly hippy vibe Mr. Game Reviewer?

From flopping to flourishing, ...And Then We Died has done both an equal number of times at my table. I almost feel like whispering to the cards “It's not you, it's me” when it has failed to connect with a group. Emma Larkins has created a game that pushes comfort zones and challenges creativity. A few missed shots only makes it all the sweeter when it does hit the bullseye.

February 21, 2019
Rating
3.0
...And Then We Died
From flopping to flourishing, ATWD has done both an equal number of times at my table. I almost feel like whispering to the cards “It's not you, it's me” when it has failed to connect with a group. Emma Larkins has created a game that pushes comfort zones and challenges creativity. A few missed shots only makes it all the sweeter when it does hit the bullseye.
W
WadeMonnig Top 10 Reviewer 195 reviews

engineer Al replied the topic: #293764 13 Mar 2019 14:20
We played this late night at Trashfest East this year. Laughed a bunch and had a great time. I wish I could remember the story, it was a bit convoluted but definitely funny! There was a Wizard and maybe the Mob was involved. My memory is not what it used to be. . .

jay718 replied the topic: #293790 13 Mar 2019 23:51
I looooove this game. I worked the Killjoy booth at PAX Unplugged last year and demoed this about a hundred times. Looking forward to playing this with the crew at ConnCon.
Read More...