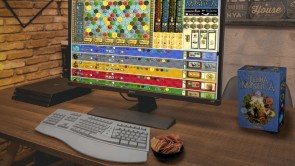 Games nights are about social interactions, catching up with friends, maybe some ribbing, eating snacks, enjoying a drink, holding cards or moving pieces, maybe rolling dice and enjoying how a game unfolds, its twists and turns. It's about a shared experience and coming together. Yet, at the moment we have to stay apart, which changes how we interact and how we behave at games nights. It also changes how games nights feel. There are things we can do to try and make things feel as normal as possible. So here are some suggestions I have, things that I  have learned from my own weekly games nights.

I don't want to go too much into the technology side of things in this article, but of course, when people are in different locations, you need to use technology to make things happen. Hopefully, you have a computer of some sort and an internet connection. If not, then a mobile phone or tablet will also work, but the larger a screen you have access to, the better. A lot of TVs can be used as a monitor, either by connecting a cable or casting to it.

You will probably have to learn new things, but with modern online search engines, help shouldn't be too far away. You might also have to set up new accounts for chat and online game sites, but that isn't too hard either. It should be possible to find the right solutions for you.

With that out of the way, let me move onto the social side of things.

I think it's important to keep doing the same things that you would normally do during your games night. Just because you're apart, sitting in front of your own computer, doesn't mean you can't enjoy snacks and drinks. In fact, if you're playing online, nobody will be worried about sticky fingers or spilt drinks - as long as you don't spill them all over your computer.

So have some crips, dips, sweets or whatever else you would normally have. In fact, you could treat yourself and have something fancy and special that you would normally only have on special occasions. So go for the branded crips or some luxurious chocolate. You can even have an alcoholic drink, if you want, because you're not driving anywhere - or just enjoy a soft drink, hot drink or other beverage.

To create a sense of togetherness, share a photo of your snacks and drinks - or if you're using video chat, then hold everything up to the camera, so everyone can see. I found it really made a difference to see what others are eating and drinking. It's strange, but little things like that really help and make you feel more connected.

Speaking of video chat, I would probably recommend to keep it simple. A good voice chat is often much better than some grainy video of someone's face, that keeps blurring and hogging the bandwidth. Maybe use it at the beginning of the games night, or the end, to allow you all to catch up with each other, but the focus should be on the game and the chat for the rest of the time.

Catching up with what everyone has been up to is also very important. You haven't seen each other for a while, so do let people talk about what's been happening in their lives. Just be aware that voice or video chat is a bit different to talking in person. There is a delay, so let people finish what they're saying and don't talk over each other. Leave pauses to allow others to join in. It's not too hard and you should quickly get the hang of it.

Also, don't be afraid to ask someone to repeat what they said, if you didn't hear. In fact, if the audio quality isn't good enough, for example because there is background noise or the audio keeps cutting out, then do say so. People don't usually hear how their audio comes across, so they won't know if there are problems. By the same token, do mute yourself, if you're about to sneeze or want to speak to your family about something private.

Also be prepared to have a backup way of communicating. If the audio and video fail, then being able to type a message is great. If you can, have multiple communication tools ready, so people can switch from one to the other, if a platform doesn't work. Even though most tools work pretty well, at the moment a lot more people are using them, which puts a strain on the system. So if you have Skype, Discord and Slack for example, then you can go from one to the other, if there are problems.

When it comes to playing the game itself, you also want it to be as easy as possible. Simulations of real games, such as Tabletopia or Tabletop Simulator, look amazing and feel more like you're playing a real game, but are harder to use, because you need to use your mouse to pick things up, move them and drop them somewhere else, while panning, moving and zooming the camera, so you can see what's going on.

So sites like Yucata.de or Steam, where you just click an option and the game does the rest, are amazing. They make gameplay a lot easier and quicker, allowing you to focus on the game and still be able to chat to your friends.

Again, continuing to chat while you're playing adds to the feeling of being together. If your group usually ribs each other, then continue to do so when you play online. If you chat about other things, while someone takes their turn, then that's fine too. Just remember that you can't have two separate conversations at the same time, which you could do when your group sits around a table. However, you can still chat.

If you need to leave to make a drink, get something from the fridge or go to the toilet, then say so. Even if you're using video chat, it's only polite to let people know why you're disappearing. Then mute yourself and maybe even switch off the video, so that it's clear that you're away. When you come back, do say so too, so people know.

Remember, now that you're playing online with friends, you don't need to travel. So you can use the time you would normally spend to get to someone's house to play a longer game or several shorter games. It's amazing how much of a difference it makes not having to worry about getting back home afterwards. You're more likely to stay up longer to just get one more game in, because you can just head off to bed afterwards.

When you're all done, or if you need to leave before the others, then do still say good-bye and arrange your next games night in advance. It's yet another little thing that makes you feel more connected. After all, you would say good-bye to your friends at a normal games night.

So, I do think that playing with people who are all in different locations works and is as close as we'll get to a having a real games night at the moment - and playing remotely also offers some upsides.

Have you played games with people in other locations yet? What tools did you use? How did you find the experience? Are there tips you want to share? I would love to hear from you. Please post your thoughts and suggestions in the comments below.