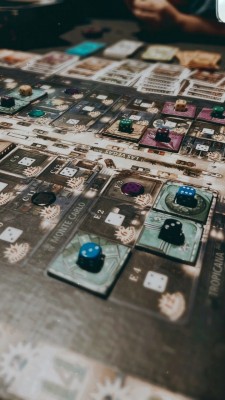 Reviews have a purpose in the world of criticism, but they are not the be all and end all of the discipline. Reviews should tell us how a game feels to play, the emotions it elicits, the play it engenders. It should include the reviewer’s opinion on where they think the game sits in the hobby. If you believe that any review can be unbiased then I have these magic beans you can buy from me.

Criticism does not stop with the review format. On this site I frequently write about the politics, philosophy and culture around games. Today I’d like to try something a little different. When I write a review, or I should say now when I write a review, I try to let you know how the game feels to play whilst keeping away from as much of the drier mechanical description as I can.

In the piece that follows we are going to immerse ourselves in the seas of analysis and see what pearls of wisdom we can bring to the surface.

Lords of Vegas. A game that has been in my collection for a long time and will likely never leave. It’s an emotional rollercoaster of a game and you can check out my review here. What we are going to do now though is dive into what makes it really tick. What is the driving force behind this game of casinos, dice, and pushing your luck as far as it can possibly go. 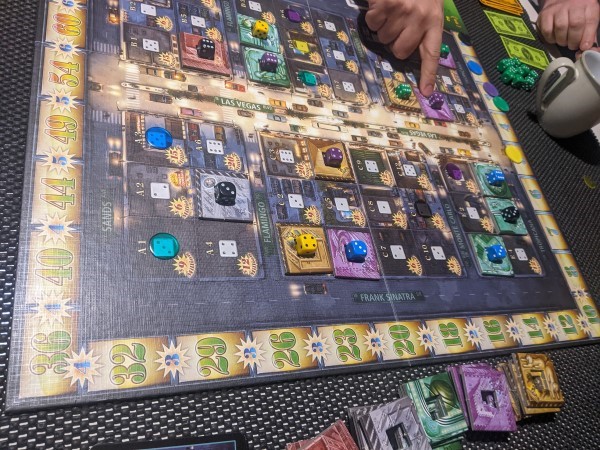 Welcome to the Sunset Strip

Now you might expect me to dive into that last point as the driver of this game. However this is not what pushes this game forward. For the real mechanical core of this game we must look to the humble victory track around the edge of the board.

In the majority of games the victory track is just that, a measure of victory, a track of success. Of course it is that here as well, and the person highest up the track at the end of the game wins. Lords of Vegas pulls a trick with the structure of that track though. The first section is a linear progression, 1 number after another with a single increment between them. As we turn the first corner the track changes, first to increments of 2, then 3, then 4, right up to an increment of 9 at the end of the game.

Why does it do this? On a given turn of Lords of Vegas a player draws a card, places one of their tokens on the space to denote ownership and then there is a payout. This payout happens in two steps. Firstly you get money for dice you have in casinos, where the casinos match the colour of the card drawn. You also get some money for lots you still have to develop. The second part is victory points which you get based on the size of casinos that you own, again matching the colour of the card just drawn. A 1 square casino is just 1 point, 2 squares are 2 points and so on.

Let’s look back now to the victory point track. Up to 8 points we are climbing in single point increments. As we turn that corner we are climbing at 2 points at a time. What this means is not only do you need 2 points to move up each step on the victory point track, but that you need 2 points from a single casino to move up each step. You suddenly need to have at least one casino of size 2 or more to progress. This means the game is forcing us to expand our casinos, to risk taking control of others, to engage with the rest of the systems of the game to climb that track.

Now in other games there are loads of ways to climb a victory point track and that is the appeal of a lot of the german school of game design. The variety of ways to produce points, the different strategies to get there, that is what attracts people to those games. In Lords of Vegas the victory point track drives you towards a single method of gaining points: the expansion of casinos. The game is singularly focused on giving you tools to do that one thing and in doing so drives the player conflict in the game.

Without the push to make bigger casinos, players might be happy just having lots of single square casinos scattered across the board. With the track as it is this would only get you as far as 8 points. If you want to climb further you must expand. Not only that but as the track progresses you need bigger and bigger casinos. You only have 6 steps where you need a 2 size casino to advance, then 4 where you need a 3 size casino, and so on. You are pushed to expand. You must interact with the other players and the systems the game gives you to grow your empire. 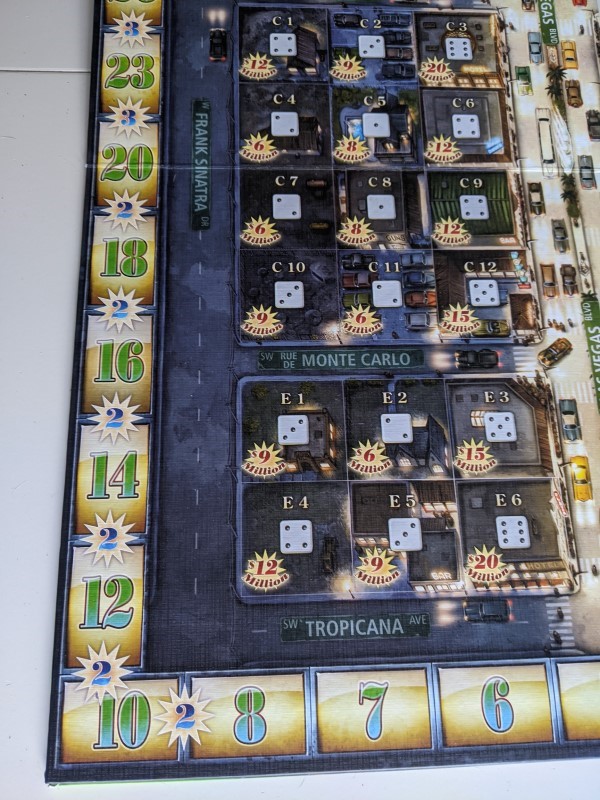 Lords of Vegas has a strong random element running through its DNA. From the moment you start setting up the game, your control of the board is down to the draw of a card. Every turn that control changes, determined again by a card draw. You spread across the board, little bits of control granted to you by the gods of chance.

You need to join these areas up, the victory point track pushing you to make larger and larger casinos in order to advance along it. You may get money no matter what the value of the dice in your casinos, but you only get points if you OWN the casino, if your dice is the largest value one in the entire casino. Sure you might be fortunate enough to start out as the big cheese, but that just makes you a target as the other players jostle for your kingdom. The need for a larger casino means people will take risks, calculated risks.

It is here where the emotional highs and lows of the game come. You need money to build casinos so you take a risk on the Gamble action, hoping to take money from an opponent and not bolster them with your own. You need to expand but don’t have the plots so you Sprawl into an adjacent plot, taking the risk that it will be snaffled out from under you on a later turn. You need to take control of a casino so you risk rerolling all the dice in it, hoping to be crowned king whilst not destroying your ability to make money (it will always be ruined, trust me). In taking all these actions you manipulate chance and calculate probabilities, all in the name of climbing that victory point ladder.

You will curse the gods in this game, draw in your breath as the dice are rolled, commiserate and congratulate over chances taken and opportunities seized. You’ll look across the table at your fellow moguls and asy those four little words ‘Let’s make a deal’. Yes you can make deals at any time and the often fractured nature of your real estate empire means that making deals can make or break the game. They are just the cherry on top of the cake though, for the most part your ability to manipulate the actions and probabilities of the game are what are going to win it for you.

Lords of Vegas is a masterclass in focused design with no baggage. The victory point track steers you towards the singular goal of expanding the size of your casinos and the reach of your empire. In structuring the Victory point track as they do it forces engagement with the systems, conflict between the players, and taking risks you can’t afford not to take. I love how exhilarating every game of Lords of Vegas is and every one is a different story of manipulation, avarice, and betrayal.

thegiantbrain replied the topic: #330158 27 Jan 2022 07:39
Thanks Oliver. I tend to avoid deep mechanical breakdown in reviews, so this format gives me a chance to stretch my legs on that front.
Read More...