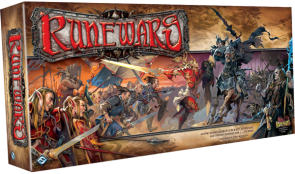 RUNEWARS is, as many of us know by now, a pretty great game. I like it a lot, and after owning it for about a month I still want to play it week in and week out, which is a good sign. I think it's got legs, and I think over time its stature will grow with expansions.

But you know that feeling when you watch a movie and come to the realization that it was edited for length just so theater owners could squeeze out more showings per day? That's how RUNEWARS winds up feeling to me.

It's not that there's missing content- in fact, there's TONS of it, and more than should be wieldy in a modern board game. It's that the game feels like it was written to be shorter than it really is, as if FFG wanted to stick hard and fast to a 3-4 hour playtime as a marketing bullet point so concessions were made to accelerate the game. You may say "multiple paths to victory", but I say the game throws victory-generating Dragon Runes at you strictly as an accelerant. And it's almost better to avoid the military element altogether as it's a lot harder to fight your way into enemy territory to claim Dragon Runes than it is to topdeck one in a hero quest. The game may not even last long enough for you to make it halfway across the board.

Many have already cited the game as having that "over before it gets started" feeling that we've seen in WARRIOR KNIGHTS and a couple of other recent games, and it definitely can have that- I saw a game end on the third turn thanks to a couple of Dragon Thrones and some lucky draws. Sure, you can fix that by playing to however many Dragon Runes you want, but the fact remains that RUNEWARS is a big, epic-scale game that needs to be played all day, not something to squish into three hours so you can play a bunch of filler games before you go home. Simply stated, the game is edited for length.

Beyond that, I sincerely believe that there is no excuse for this game to have shipped as a 2-4 player game at a $100 MRSP. Practically no one in the world will be surprised when FFG releases an expansion that adds empires and components to expand the number of players. That makes fielding a five or six player game of RUNEWARS a $140-$150 proposition. You could almost buy a current generation game console for that, or three other board games of equal or better quality. And given that games like TI3 and STARCRAFT shipped with $80 price points and had- literally- twice as many components, it doesn't seem to balance out. I don't fault FFG for trying to turn a profit, but when what you're getting in a $100 box isn't on par with the rest of a product line in terms of player support and component density, something's not quite right.

But there again, this is a 45-60 minute per player game, and having 5-6 players out of the box means that you're breaking that 3-4 hour threshold. So the decision to not include full support feels like another editing choice to ensure that potential buyers aren't scared off by a 6 hour game...that really needs to be about 6 hours to capture the epic scope and range of it all.

But I'm just bitchin', RUNEWARS is still a good one and it's one that you should play.