Agricola, the most exciting boring game you will ever play! 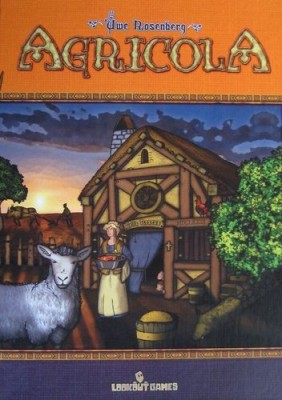 This is a F:AT exclusive, last weekend I had a chance to fly to Atlanta and play the most highly anticipated euro of the past 12 months with none other than M Barnes, Dr. Martin and Will "Why are we not playing Ti3" Kenyon.

This is the Session Report.

When I arrived in Atlanta I had to make my way over to Will's house, Lucky for me he live very near the airport and so I did not have to wait that long before I was there and able to play Agricola. So high was my excitement level that on the way over I was thinking about all the cool variations of the game that could be made upgrading things like my rental car, or my airline ticket... think about it, I start with a lame AM radio and slowly improve my ride by adding a cd player, then maybe satellite radio... the possibilities are endless.....

Anyway I digress... such is the call of the "Cola".

I arrive at will and Barnes had already setup the game. The player mats were laid nicely on the table and the stacks of card were setup so everyone could read then (this was a paste up copy that Rob Martin had obtained while visiting the Fatherland in a quest for the perfect pair of lederhosen, a pair that he was wearing for the game of course.

Will was in the corner finishing what I think was his 3rd beer, mumbling something about the how he wanted to play Yssaril, I had to keep reminding him that there were no races in the "Cola" and he just kept concentrating on his beer.

Barnes Suggested that we use the "K" deck since we were all experienced gamers and all of us agreed, except for Will who suggested we use the shattered empires expansion. We then took our seats and began to play.

I was the start player, and I knew from my hours of relentless internet research that this game was about "Focus and  concentration" the diverse paths in this game are a trap and I knew that Barnes and Co would be well versed in the shortest path to victory. I choose 3 occupations and 2 minor improvements and we were off to the races.

On Turn 1 I managed a devastating move by playing the resource Seller card... Rob knew exactly my plan and moan something about know exactly how to counter it. Barnes smugly smiles as he looks at his hand and will tries to play a sabotage card, and after the 3 of us correct him he goes back to drinking his beer.  I follow up the awesome play by playing my Market Woman and Fence overseer cards. The boys were raging at this point. The trash talk was so bad that will's wife had to come upstairs and remind us that there were children in the house. Barnes could barley control himself, he knew he was off to a sad start. His strategy of improving his well was not paying off as it seem Rob was able to block all of his move by cleverly anticipating what he needed. Will was now trying to build War Suns by upgrading his fire pit to a kettle, and again was corrected and sent back to the solace of his beverage.

My game was looking up, I knew I was sitting on the devastating Furrowing Plow card, something that I knew would make the other quake as I lay it on the table. Martin played the Lover card, a strong move and Barnes was making a strong move forward by a well times clay pit, but in the end as soon as the plow hit the table I knew that I would pull this one out.  Kenyon at this point had passed out and was face down drooling all over his Ti3 box, clutching it as if it were some long lost childhood plush toy.

With the excitement level ratcheted up to the breaking point we did the final score. It was close

In the end it came down to my skilled play of the wet nurse card, the bonus for that alone devastated the other players. I cannot wait to fly back down there and show off my mad farming skillz again. I know that Barnes and Martin as lesser men for having suffered a loss in a match of optimization and family planning.

I hope you all have enjoyed this session report and I look forward to reading about your great card combinations on the Geek in the future. Enjoy your April.

Man thats a much better story when written in english... sorry for the lack of spell check. -M