Legitimacy: The Game of Royal Bastards Board Game Review 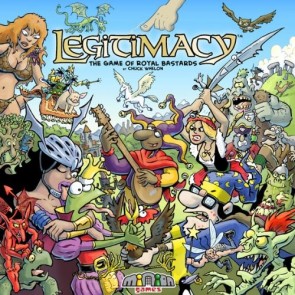 The review train rolls on.  This week, we'll be talking about the light adventure game Legitimacy: The Game of Royal Bastards from Minion Games.

Does this achieve the holy grail of the quick-playing adventure game, or is it yet another failed attempt?  Read on to find out.

It's not much of a secret that personally, I've been looking for a light, fast-playing adventure game.  I'm the type of guy that doesn't just want a game to fill a particular genre; I want that genre to be filled regardless of number of players and total playing time.  The adventure game is a particularly troubling one to fill in that short-playing time gap, as the really good ones miss the mark by a sizeable margin when it comes to fitting inside an hour or so.

Legitimacy is a fast-playing adventure game that does in fact run in about an hour with four players.  The game depicts the comedic squabble of the heirs of an oversexed king.  The king has passed on, and now his illegitimate children are attempting to prove their worth by questing for royal heirlooms, returning three of them to the castle before any other pretenders to the throne and claiming their "rightful" place as the new king. 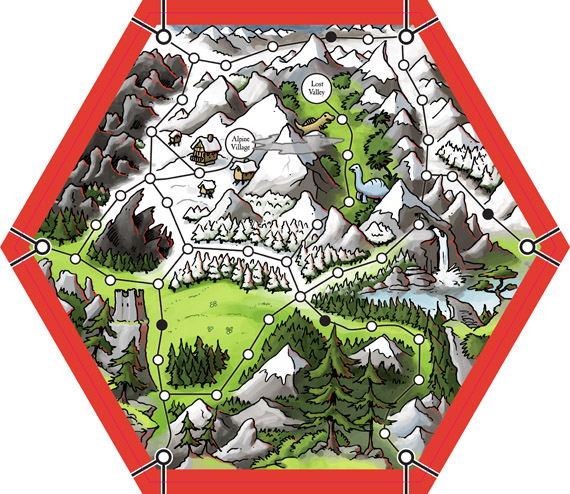 (each character has a "home" tile that they start in.)  Each tile has a series of connected dots/spaces for movement, and all tiles are connected to each other based on paths that run from each on all sides.  If you've ever played Return of the Heroes, you'll have a pretty good idea how this is set up, just with hexagonal tiles instead of square ones.

Each tile has an associated small deck of cards, and you only play with the decks that match character tiles that are in the game already.  So if the forest tile is in play, you will place that deck off to the side of the board, but if the swamps were not included, that tile and its associated cards are returned to the box.

Basically, from there it's a roll and move style game, where each player in turn chucks a die and moves that many spaces along the connected dotted paths.  Certain squares on each tile if landed on will cause a card to be drawn from the appropriate deck.  These can be spells, allies, or weapons to help you; Quests, that if completed will reward you with one of the crown jewels, three of which are needed to complete the game; and curses and cursed items that you can give to your opponents to make their lives miserable, slowing them down and hampering them in other ways.

The castle tile has its own deck as well, and based on the number of players it is divided into a "market deck" and a regular encounter deck.  These cards are fixed and will be in every game, but whether they are in the market deck or the encounter deck will be random from game to game.  You will find powerful allies, quests, and other desirables here as well. 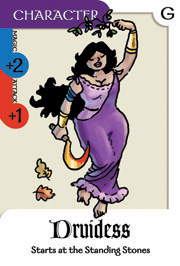 The goal of the game is to ultimately complete quests to earn the royal jewels necessary to win, or to steal those found by others, or both.  Apparently the people who will be determining the legitimacy of succession really don't care how you came by your royal loot, only that you have it.  The crown jewels are "funny" items such as super-pointy swords and magic chickens (I wish I was making this up.)

The characters have stats as well as alignment.  The three stats are Attack (the value you add to a six-sider in combat), Magic (the + range you get for casting spells at a distance along the board) and Move (the value you add to a six-sider when moving.)  Your alignment comes into play when using certain items an allies; some are finnicky and will only help you if you're of a certain alignment.  All players start Good, but turn evil any time they basically do anything untoward to any other player.  Once this happens, only questing for and finding a crown jewel will turn you good again.  You don't have to be either good or evil to win, but once you turn evil, good players are free to attack you with impunity, and some of the best items in the game--including a giant Dragon ally--are only usable by players of "good" alignment.

Eesh.  Talk about a mixed bag.

First up, the box itself is small but sturdy and thick.  It feels exactly as sturdy as the Twilight Struggle 2nd Edition box, just a much smaller size.  That's pretty impressive.

Also, the tiles that come with the game are on pretty thick cardboard.  Damn fine tiles, actually.  The artwork on them is the same cutesy "funny fantasy" stuff, but they are illustrated well.

The pawns in the game are generic, colored pawns.  Each color matches with a particular character card, so while the pawns are super-generic you should be able to easily spot who you are on the board.  The pawns are small but are actually a tad large for the small dots on the adventure tiles, but this is truly the tiniest of complaints.

The instructions are decently written.  They definitely have that rough, small publisher feel to them, but they are completely functional.  There is an index too, breaking down the composition of each of the area decks, and a list of what all the spells do--really useful as there is a Genie ally that allows you to cast any spell in the game, so you don't have to go sifting through the decks to remember which one you'd like to cast.

These are, bar none, THE shittiest cards I have ever seen in a professionally produced product.  The cards are completely uncoated and seriously feel like they are of the same thickness and composition as the typical cardboard cereal box.  The crappy quality of the thin cardboard means that after only a minimal of handling they will start to crease, wrinkle, split, you name it.  These are the kinds of cards you would sleeve not to protect your investment but to simply keep the cards from disintegrating after half-a-dozen plays.  Yes, they're that bad.  Some of the cards in my copy are already splitting and creasing, and we are damned careful with our games.  Trust me.

The art on the cards is again that funny fantasy stuff.  They are well done if that is your sort of flavor.  Personally I don't mind humorous fantasy stuff, so the actual illustrations are definitely okay with me.  But the ultra-janky cards ultimately let the artist's efforts down.

So basically, for $34.99 MSRP, you're getting a bad-ass thick box, some nice sturdy tiles, some generic pawns, and several small decks of cards that may just fall apart as soon as you look at them.  Personally I would have chosen to skimp a bit on the box (it's a small one, more likely to be on top of a pile than bottom) and the tiles (they're nice, but you just put them in play, and it doesn't really matter if they're marked, does it?) and made sure to put in some decent cards...you know, the components that are going to get handled constantly and actually will matter if they're marked...just a thought.

I like the idea of a quick-playing rules-light adventure game.  However, this one misses the mark in several ways.

First, each area deck is tiny.  Since all players are going to be digging for those quests--and those quest cards are one to an area--you are almost guaranteed to see everything there is to offer after a couple of games in terms of suprises from any of those decks.  And there is no combat with any creatures from the decks, as all creatures in there are potential allies.  Your only antagonists are the other players.

Second, the magic system is hideously undercooked.  There are a small number of spells that are even worth casting, especially considering casting one on another player instantly turns you evil.  That's probably worth it for the spell that lets you steal an item from someone, not do much for the one that lets you peek at an opponent's hand.  (Yes, seriously, that's all it does.  Take a look, hmm, that's nice, well, not much I can do about what I've found, now is there?)  What that means is that a magic bonus most of the time is nearly useless, especially compared to stronger attacks or more importantly, increased movement.  Yeah, that Wizard with his +4 Magic looks sooooo tempting...until you've played the game once.  Then, you'd better believe if there's a six-player game after that, people are going to be fighting NOT to take him. 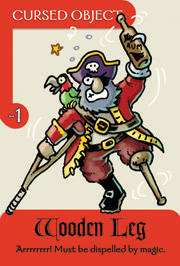 There is a card-limit of seven in play or in your hand for each character.  Stupidly and unintuitively, your character card counts against this limit.  You also get a starting pet, which you cannot discard, who also counts against this limit.  My favorite is the pig, who increases your card limit by one, but himself takes up a slot.  Yeah, that's pretty much all he does.  Negates himself.  That'll do, pig.  That'll do.

That's not to say it's ALL bad, though.  The fact that there are a limited number of quests means that the players will find themselves locking horns in the late game, as there's not quite enough of the crown jewels to go around for everyone.  This ties in nicely to the good/evil system.  In the early game, players will strive to remain good if possible, as there are some powerful items and allies usable only by good characters.  However, the structure of the game will eventually drive everyone towards evil.  It's a nice touch.  Typically the end game will come down to one player who has managed to stay good, riding around on his dragon and playing sherriff to all the other no-goodniks as they scurry away, scrambling to finish their looting before they get pounded.

I should also add that I did get a chance to play this with two casual adventure-game neophytes, and their response to the game was positive.  I wanted to stress to them how many better adventure games there were out there, but I had to stop short as I couldn't think of any that would fit so succintly in a lunch hour.  So even though I thought I was in this game's target market, I'm thinking now that maybe I'm just not.  Still, I can't help but wonder if they'd ever played a more richly developed adventure game, if they'd change their tune.

I'm going to have to say that unless you're just dying for that hour-long questing game, or have casual players in your group who this one will really speak to, you can safely skip Legitimacy.  And that's a shame, because I really, really wanted to like this one.

Given what I know now about the King's
sexual activities, I think I'll skip the milk