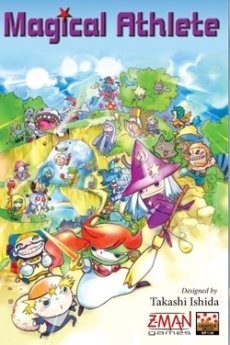 I was amazed when I looked over at BGG and saw no one had done a review of this great game.  I rarely write reviews, but part of me wanted to make sure that it didn't get overlooked by those hesitant to buy or even try a game labeled as “roll and move”. (OK, maybe hesitant is putting it too nicely)   Honestly, even with Barnes' great review a year or so ago, I might never have bought this game without trying it out in Atlanta at Richard Launius' Clubhouse during Averyfest 2010.  I think I played 3-4 games in the brief gaming time that I had in Atlanta.  I’ve had more pure fun and laughs playing this game than many more complex, clever or “elegant” games. Why? In short, the drafting of characters for the 4 or 5 races and the wonderfully interactive character powers transform it into something special.

Though the game is simple, it hardly makes sense to explain them...but it is also necessary to understand the easy fun of the game. First, you take the sturdy, mounted board and flip it to the side with five drafting spaces ---numbered 4, 3, 2, 1, 0 – in descending order. Each player then gets the same number of “point” chips to draft their team. One of the 25 character cards (with simple but cool anime illustrations) is then flipped face up and put in the “4” spot on the board. Rotating around the board, each player in turn opts whether or not to use 4 of their point chips to buy the character (e.g. in a 4 player game, each player gets 8 points worth of chips). If no one wants to buy it, then that card is slid down to the “3” space and a new card is flipped and put into the “4” space. Again, rotating around the table, a player then opts whether he wants to buy either of these cards for the value listed. The process repeats until someone buys a character. If it winds up that a character gets to the “0” space—that means that every space on the board is filled. The player can get the card for nothing. The last player in turn, however, must now buy a card—even if it if it is free—because there is no spot on the board to put a new card. Drafting continues until everyone has 5 characters (in a 4 player game).

After flipping over the board to the racetrack side, each player secretly chooses a character to run in the first race and places the character card face down in front of them. Once everyone has chosen, players put their chosen character’s token at the starting line and the dice rolling begins. The first player rolls the die and moves their character—taking individual character powers into account, of course—and therein lies the fun of the game (which I’ll touch on in the next paragraph). The first player to cross the finish line and pass through the 30 spaces from the start line to the finish line wins. In the first race, the winner gets 3 points and second place gets 1 point (Point rewards for winning and placing increase by the time the last race is run). After collecting your reward, players start the second race and begin the character selection again.

The heart of the game that transforms it into one of the best fillers I’ve ever played revolves around the 25 different characters and their powers. Some characters seem very powerful like the Amazon who doesn’t have to roll the dice at all but just gets to move 5 points every turn. Or the Merchant, who instead of rolling on his turn, can just switch places with anyone else on the board. Or maybe you want the Ninja—if another character begins their turn on the same spot as the Ninja, this awesome character can just ride along behind it (and then still have his own dice roll when it is his turn!) These might be the characters that seem worth spending half of your auction money to purchase. You might think that no one could stop the Amazon from winning. Well, unless the Amazon is assassinated, perhaps! Yup, there’s an Assassin character that can eliminate any character chosen in the just completed draft…completely ticking off whoever wasted their money on a seemingly unstoppable character. Or maybe it is a character whose power allows it to roll a dice and move any player back that number of spots. In a wide array of possible character combinations for any given race, a seemingly awesome character power winds up being neutered and consigned to last place. Of course, the dice rolling throws allows the possibility of even a weak character can pull ahead for the win if the other characters are beating up on each other the rest of the time. Take a minute to download the character reference sheet from Z-Man Games' website to see the various character powers and abilities. Again, the combination of powers makes the game far more than the seemingly simple mechanics.

Do you want to have a blast with a game that anyone can pick up in a minute, then Magical Athlete is for you. If you’re looking for a deep, intricate game where you can sit pondering moves and get all serious, then you’ll probably disdain this light filler of a game. Is it AT? Who knows, but it has been a blast every time I played it---with F:ATTies like Avery, Billy and Gary Sax to a group of fifth grade girls my daughter had over for a sleepover.

Thanks Zev, for finding another hidden gem! It may not be Agricola (one of your previous finds) but that’s just fine with me!