Thunderstone: Wrath of the Elements Review 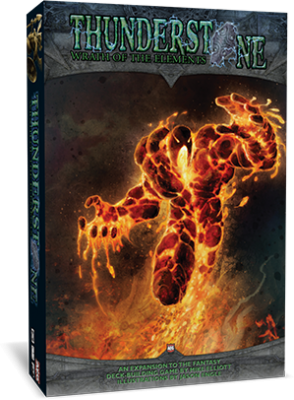 I know I'm playing catch-up here, as I have been these past few months, but diving head-first into the Thunderstone system has been a real pleasure.  Everyone who reads me and has talked with me on the forums knows how much I enjoy deckbuilding games, so know going in that I wear that proudly on my sleeve.  But thus far, Thunderstone's base game has delivered the goods.  So how does the expansion stand up?

When we last left our adventurers (see Thunderstone Issue #675,True Believers!  --Smilin' Stan) we saw that yes, we were dealing with a Dominion clone, but one with an appealing theme, and more satisfying crunch to the gameplay.  Turns out, shockingly enough, it was more fun thematically to cut down undead hordes with a Dwarf wielding a big-ass flaming sword than it was to spend Gold and purchase Duchies.  Who knew?

Yeah, Thunderstone had that rough, wild, unpolished edge, but let's face facts--that is the AEG style, and I don't mean that in a negative way.  Sometimes, a game's rough-hewn edges give it character.  Sure, that can be either a good or a bad thing, or sometimes both.  In this case though, given the dungeoneering theme, I can roll with it.

And there may be many others, but they haven't been discovered

In my review of the base game, I mentioned that I'd like to see more variety in terms of monsters and Village cards, and more interaction.  And though I didn't mention it at the time (mostly because I was used to Dominion's not-accomodating expansion storage system) I wasn't totally enamored with the storage system in the first box.  I think I didn't complain about it because I'm sadly getting used to sub-par storage in my games, the whole bagging and insert-tossing and plano-buying just becoming a part of the whole gaming experience.

Let's start with the storage--this box is freaking genius.  I mean that, literaly genius.  In a box half the size of the base game, you open it up to find some foam inserts and not nearly enough cards to fill that double-lined box.  Then, you see a shrink-wrapped copy of dividers, and it hits you--this thing holds all the cards of this set AND the base game.

Not only that, but the dividers suddenly make sorting a snap, with pictures on the divider cards that show you what card comes from which set, and even dividers for the promo cards, and hey, why not, a few blanks for anything not thought of just yet.

The actual cards included in this set break down like this (from the rulebook:)

Of this stuff, only the Traps and the Guardian (a special monster) are truly "new". 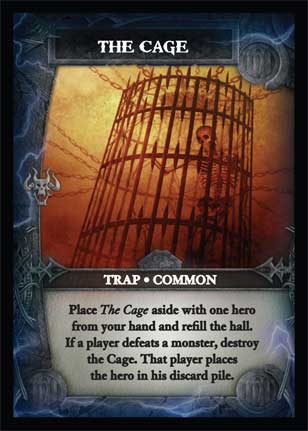 There are new Randomizers called "Dungeon Features", and thus far, those features are either Traps of varying kinds or a Guardian.  You shuffle in the Dungeon Feature randomizers into the Monster randomizers when building the dungeon, and if one is revealed, you then randomly choose a Dungeon Feature (a separate set of randomizers) that will get put into the dungeon deck.  You then continue to reveal cards until you have three monster types.  It's possible, though unlikely, you'd have all Traps, a Guardian, and the three revealed monsters in your dungeon.

You then shuffle and build the dungeon deck the same way, shuffling the Thunderstone into the bottom ten cards.  Astute readers may note that there is a new Thunderstone card included here.  It's a 1VP Thunderstone, for those who feel the 3VPs of the base game's stone is too much of a lucky reward (I'm not one of them.)  This Thuderstone is also useful for the new Campaign mode where players can claim multiple Thunderstones, as the 1VP Thunderstone provides light.  If you're like me, you'll see the light icon on the Thunderstone and wonder "WTF?" until you read the back of the rulebook.

Traps will pop up during the course of the game as the dungeon is refilled, and they always have negative effects.  You could see Poison Gas take down your heroes, or one of your warriors get locked in a Cage, or your party could turn to hear the rumbling of a Rolling Boulder (in a nice nod to both their own "The Adventurers" and by extension Raiders of the Lost Ark.)

Here's the text from the Rolling Boulder to give you an idea how Traps work:

Each player, starting with the player on your left, flips a card from the top of their deck onto his discard pile.  Continue until three Heroes have been revealed.  Destroy the revealed Heroes.  Destroy this trap, and refill the hall.

So needless to say, when the Dungeon is loaded with traps, chaos and mayhem are going to ensue.

There are some cool bits, like Poison Gas being detectable by your Thieves ("detect and disarm, ya little thieving bastards!") and Heroes captured in the cage rescuable by the next party who comes along and defeats the monster.

Then there's the Guardian monster type, of which only one was included in this set...but he's a doozy.  The "Dark Champion" is a strength 12 (!) Doomknight * Guardian who cannot be removed from the Dungeon Hall unless defeated--so no "Banish" tricks here.  If he Breaches, reaching rank 1, he goes in a new spot (Rank 0) and from there causes all players grief, forcing them to destroy one card at the end of each of their turns.

More of the Same, And I Just Need You, To Remember My Name 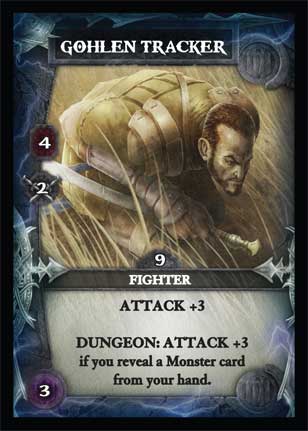 While the rest could be dubbed "more of the same", the added variety is nice.  You do get new Heroes who interact with existing cards in new ways, such as the Blind-fighting monk who can destroy light sources to get ever stronger, or the Tracker who powers up the more Monster trophies are in your hand.

You also get a nice variety of new, non-weapon Village cards, adding a much-needed splash of non-pointy things into the Village pool.  You've got the Tax Collector who can prey on the gold of other players, a Blacksmith who will boost your Village visits, and you can even engage in a Tavern Brawl--thematically one of *the* coolest cards in the set.  Between some of these new Village cards and powers on heroes, there is much more room and possibility for interaction, really one of the weaker points of the base game.

You've got new monster types that have to be dealt with in creative ways, or that provide escalating challenges.  The Golems shrug off weak warriors.  And the Horde has its own special deck in which more and power powerful Horde attacks will come, and at the end of the game you'll earn escalating points based on the number of Horde you've managed to defeat.

Sitting on Your Throne, You're Playing with a Fireball

Wrath of the Elements is just a solid release, through and through.  I'm not certain it will make fans out of Thunderstone that truly hated the base set, but the Traps, new variety of cards, and added monster types with new challenges will certainly please those who were looking for more.

The expansion box is one of the finest examples of listening to the customers, and though it will be painful to do for some, you can chunk your base game box, store both in this one, and even have room left for the next expansion to boot.  This may, however, make Thuderstone base sets in their original boxes something of a collector's item, as there really is no reason to keep it after you have this.  The dividers make finding and sorting cards a snap, I really, really dig what they've done here.

It's not a quantum leap forward, but a nice fleshing out of the base game.  As the number of cards continue to increase, you could see oddities where certain Heroes have no cards to interact with their special abilities, or  no-weapon Villages, so you may consider as the number of cards continue to expand going with fixed setups, or better, "semi-random" setups so that certain types of cards are always represented.  This expansion gives you the tools for that, so basically, just have at it.

I didn't mention the epic campaign variants which are really just longer games with multiple Thunderstones and HUGE Dungeons filled with lots and lots of monsters, plus a guaranteed Guardian.  There are also special rules for playing and affecting games played back to back (such as shuffling in undefeated monsters from the previous game) or Tournament style play with rules for scoring multiple games.

Last but not least is a solo variant, and I will ashamedly admit to not having a chance to have played that, though to be fair I am not much of a solo gamer at all.  For those who are, or want to dabble, the option is definitely there, a chance to build your deck to slay the oncoming hordes of monsters who are pouring out of the dungeon and threatening the village.

All in all, this is a robust though not revolutionary release, giving fans more of what they want, spicing up the gameplay with a few new elements (har har) and crafting a truly bitchin' expansion box to complete the package.  For fans of the game, you should have this already.  Go get it.  Hearty thumbs up.