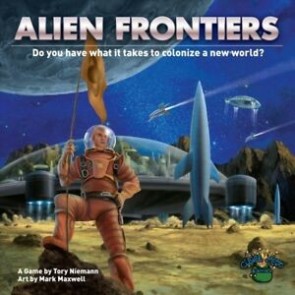 Unless you’ve been living under a rock for the past few months, it will not have escaped your attention that at the end of last year a company called Clever Mojo Games released a title called Alien Frontiers through the kickstarter service and that it rapidly sold out. If you read the opinions of people who’ve been lucky enough to play a copy of that original printing you could be forgiven for believing that this wasn’t only a great game but a cure for all known diseases and a sign that second coming was imminent, so great has the level of praise been. So, naturally, I needed to play the game and find out if it lived up to the hype and to that end Clever Mojo have generously seen fit to provide me with a copy of the second printing now that it’s available.

The game places the players in the role of planetary colonists, each seeking to be the first to gain dominance of an alien world by using their spaceships and orbital facilities to build colonies and plant them of the surface of the planet. It’s basically a worker placement game in which you take your ships and assign them to different activities to get different results. As is per usual in worker placements games some activities net resources (fuel or ore) whilst others allow you to spend those resources on various things: more ships, alien technology or creating colonies to dump on the planet. However there are three things about Alien Frontiers which certainly are not per usual when it comes to worker placement. Firstly, your workers (ships) are dice, and the activities they can be assigned to depend on their value, injecting an honest-to-goodness dose of old-fashioned randomness into the mix. Secondly, you actually get to interact with some of the other players, and by this I mean proper interaction as in blowing up their stuff or stealing it off them rather than just blocking their access to a desired activity (though you can do that too). And thirdly, it’s actually worth playing.

The basis on which this wobbly yet wonderful edifice rests is the simple concept of ensuring that players always have something useful to do with their dice. In pretty much all the other euro-dice games that I’ve played such as Yspahan and Kingsburg, it’s possible to get stuck without anything terribly useful to do with your dice. This is annoying and forms basically the only form of player interaction in games of this style because other players can block you from taking the good stuff on the - rare - occasions that their dice fall in a similar way to yours. However in Alien Frontiers you can always do something useful. There’s so much space in the fuel-collection activity that it almost never fills up and you can put a dice of any value there to get fuel, for one, and for another if your dice total 8 or more you can usually use them to buy some alien technology which is always useful. And in the virtually impossible circumstance that neither of those options are any good you can always leave up to three of your dice on the colonist hub which helps you shift a colony along a track and eventually on to the planetary surface. So, always some good stuff to do. But it just so happens that the other stuff you can do - collect ore, manufacture more ships (i.e. dice), steal stuff off other players and insta-build colonies is better. Because once you’ve placed your dice they stay in their spaces until your next turn, blocking remains a viable and useful thing to do. But since you can always do something useful with your dice, issues of randomness are bought down to a minimum and full blooded player interaction can be introduced into the game without overly affecting balance. It becomes more a question of the skill of the game being in how best to make use of the opportunities you get.

By using dice as playing pieces the designer has also bought in an element of the delightful “oh no, what do I do with that” sensation that you get from games like Twilight Struggle and War of the Ring where your choice of actions is partially determined by random factors at the start of the turn. I have a particular delight in those kinds of games not least because they always, always keep you on your toes and prevent mechanical tried and tested strategies from dominating. It helps in this regard that there’s such a wealth of potential strategies to try. Building up dice as fast as possible is the obvious one but things like sacrificing dice cheaply in exchange for colonies, or making a point of stealing off other players, or specialising in a particular way of building colonies are amongst the valid starting points and the details of how to put them into practice are also open and varied . Further delight is bought into the equation here because there are a wide range of alien technologies you can invest in that help you tweak your dice numbers to give you more options as to what to do with them. One allows you to reduce a dice by one point, another to add one point, yet another to do both at once and a fourth allows you to invert a dice to the number on the opposite face. Put all this together and a simple fistful of dice can translate into a dizzying array of possible actions, especially when you consider the utility of blocking other players or the value of other alien technology you might have.

Indeed, having spent a paragraph carefully explaining why the simple concept of always having something good to do with your ships is such a boon to the game, I have to do the same for the alien technology cards and the related special powers you can get by owning enough colonies on the board. See, the planet you’re trying to colonise is divided into districts and if you have more colonies in a district than anyone else you can use its special power. Together these apparently straightforward abilities open up a whole new vista of strategy, tactics and combinations. In my last game, for example, I accumulated a wide variety of dice-altering technologies, secured planetary powers that let me use them for free, and helped me get cheap ore and then tried to hog the colony constructor, a space which allows you to drop a colony on the board right away if you’ve got three dice of the same number and three ore. I did this because the lead player was quite clearly accruing technology and powers that let him use that same space extremely cheaply. It didn’t work - although I was able to get my three sequential dice and three ore every turn without fail, it relied on me getting a space at the colony constructor on a turn where he couldn’t use it in order to occupy it and block him, and that came too late for me to catch up. But it’s a fantastic illustration of how you can chain effects together to build a long-term strategy as well as a little bit of interaction. And if you want more interaction then you can use my favourite alien technology, the plasma cannon, to literally blast other players’ dice into dust. The opportunity to play grudge matches and the like by one-upping other people’s colony counts on a favoured district with a favoured power is also a constant interactive temptation.

Dropping colonies on the board is what nets you points, and points win you the game. Simple enough you might have thought, but I do think the scoring system is a bit wonky and can cause some problems with the game. You get a point for each colony you drop, as well as for certain alien tech cards, and the game ends when one player runs out of colonies. However the catch is that you also get a point for having a majority of colonies in a planetary district. That, of course, means you score can go down as well as up as other players land colonies and challenge your majorities. It’s also worth noting that late in the game players will normally have reached a level where the number of dice they’re rolling together with their power combinations can pretty much guarantee they’ll be able to land a colony each and every turn. The result is that as the game progresses, scores can become incredibly close, especially when you factor in the level of interaction in the game that allows the other players to peg back an early runaway leader. A tense finish sounds like a good thing, but Alien Frontiers delivers them with such monotonous regularity that it starts to seem like a trick. And it is a trick: the illusion of closeness comes from the small number of points involved when what’s really important is how well the players are set up to deliver more colonies and stymie their opponents, and in this regard there can be wide gaps even when the points look close. The frequency of close finishes can also make it feel like the early part of the game is a little pointless since in mid-to-late game all the players will probably be in roughly the same position points-wise. Worst of all though it delivers too many draws. Fully one-third of my games so far have been draws and although alien tech cards make a neat tie-breaker, it still feels a bit like you’ve been cheated of an outright victory.

In the bigger picture though, this is a pretty small fly in the ointment. Alien Frontiers has a lot to recommend it and is easily one of the best euro-style games that I’ve played. It has an uncanny, chameleon-like ability to be all things to all gamers. The unholy alliance of in-your-face interaction and dice rolling with the staid, steady, po-faced genre of worker placement could have been a train wreck but has, amazingly, resulted in an incredibly multi-faceted game where everything dovetails together into a whole which is rather greater than the sum of its parts. It’s both random and yet highly rewarding of good tactics and, to a lesser extent, strategy. It lets you to kick the leader, engage in grudge matches and bathe in the warm glow of leaving your enemies wailing and gnashing their teeth without allowing any of this to dominate the game. It’s both jaw-droppingly elegant and yet thematic, immersive and able to weave a satisfying narrative. And it manages to be all these things whilst staying simple and within the play time of 60-90 minutes advertised on the side of the box. The downside of this breathtakingly broad-based appeal is that the players really need to be on-board for all the facets of game play in order to enjoy the game: if you’ve got people playing who refuse to engage in head-on interaction then it can spoil the whole game by allowing certain strategies to become unbeatable. A game for extremists this is not. A game for everyone else it most certainly is.