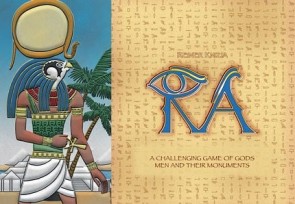 Apologies for this week - for the first time in a very long time indeed I've failed to file something new. Been a busy week, and I've been somewhat lacking in inspiration - poor excuses but the truth. So instead I've hauled something out of the archives for you to enjoy: I've been playing Ra quite a bit recently both at my work lunctime gaming club and on my new iPad so I thought I'd dig out my review of the game, do some edits to reflect my current opinion, and stick it up. Here is it - hopefully some new material next Monday

Ra is a classic auction game with a wafer-thin ancient Egyptian theme. In fact I think it’s entirely safe to say that it could probably be re-themed along almost any line you care to think of. Come to think of it it’s probably worth mentioning that the auction mechanics it employs are pretty atypical as well, but that’s getting ahead of myself. It seems to me that Ra is one of the most universally popular games around – serious dislike or criticisms seem to be rare. So I thought it’d be worth looking at why the game has such wide appeal.

As always, I start with a caveat. Don’t take my potted summary of the rules as your only guide to the game – rules are freely available on the net so go read them instead. In fact, better still download the excellent freeware version of the game with with AI and play it to get a feel for what’s going on. Or you can play the clunky-but-entertaining iPad version or get yourself on to BSW and play it there - it has one of the better interfaces on that notoriously unusable site.

The game is played in a series of three epochs. At the start of each epoch players find themselves with a number of suns (three of four, depending on number of players) of differing value – these are the currency of the game which one bids during the auction. What you’re bidding for are tiles, and different single tiles and combinations of tiles are worth different amounts of points. At the end of each epoch is a scoring round and after the third epoch the three scores are tallied into a total – highest wins.

On each players turn they have a choice – they can either pick a tile from the bag or call Ra. If they pick a tile then it’s added to what’s called the block, which is the ongoing stack of tiles available for auction. One of the tiles, the Ra tile, is equivalent to calling Ra if it’s drawn from the bag – it effectively decides your action for you. If Ra is called either by choice or by tile then an auction starts – the player next to the calling player can choose to bid a sun of a given value or pass, the next player must then bid a higher value sun or pass and so on, with the calling player having the advantage of bidding last. That’s why it’s not a classical auction – because each player only gets to bid once.

Once a certain number of Ra tiles have been drawn in a given epoch that epoch ends immediately – tiles currently on the block are discarded and anyone with suns left doesn’t get to use them. Then it’s scoring time. The scoring system is somewhat Byzantine and too complex to reproduce here but I must take time to explain that the value of tiles breaks down in a variety of different ways. Some tiles – a minority - are worth fixed amounts. The value of others is dependent on how many tiles of other types you’ve managed to collect. A third category has values dependent on how many tiles of certain types other players have managed to collect. The “value” of these relative tiles can sometimes be negative – i.e. the game punishes you for not having collected enough and there are some outright negative tiles called disasters, although the deleterious effects of these are applied as soon as you’re unfortunate enough to pick one up. Some tiles you get to keep between epochs, some must be discarded – and this all adds to the scoring strategy.

That scoring system is both the genius and the bane of Ra. It’s a bane because without it, Ra would be an absolute shoe-in for the best ever gateway game – it’s more interesting than Ticket to Ride and easier and faster than Settlers – but most non-gamers are going to struggle with the variety of scoring rules for the first few games. It’s genius because it’s at the heart of what gives Ra it’s wide appeal – this is a maths based game in which a mathematical approach to strategy is near impossible.

If you double-check my description of the scoring system again you’ll realise that for categories two and three the value of any tile that scores this way is entirely relative. It’s relative to what other players have got, to what you’ve got, to what’s on the block, to what epoch it is, to how many suns you and others have got left and to how many Ra tiles there are to be drawn before the epoch ends. In short it’s relative to so many different factors that a precise analysis of it’s value is completely impossible, especially when you factor in that the values are also dependent on what you might, or might not pick up in the future. It’s relative to so many things that when you’re playing you have to reassess the situation at nearly every point – every time a new tile comes out of the bag, every time a new bid is made or set is won. If ever there was a game that keeps you on your feet, this is it – the pace is relentless.

The inability to make value-laden judgement at any stage of the game keeps analysis paralysis at bay but doesn’t detract from this being a game of skill. It’s a light-medium game in which the strategic decisions have to be made largely on fast assessment and a sense of timing and valuation that can only come from experience. Of course this being an auction game you’re not just evaluating what’s on the block for yourself – you often want to try and stop other players getting tiles which will help them complete valuable scoring combinations. So you might want to step in with a sun to try and drive the value up or you might even want to try and steal an auction – but do you really want to expend a high value sun just to steal tiles which you don’t really need away from another player? The game challenges you constantly with these sorts of decisions, plus there’s the lure of calling Ra rather than drawing from the bag, which gives you the advantage of bidding last. Will you try and take the auction now with your high sun or will you get greedy and draw more from the bag – maybe inadvertently allowing someone else to get the advantage by drawing a Ra tile or spoiling the collection with a disaster tile? This throws into light another aspect of the strategy – this is very much a push-your-luck game in which the value of something now must be constantly weight against the risk of getting more or less value later.

Ra is a very fast and very loud game. You can typically play in around 30 minutes and the whole time is filled with tension as tiles are drawn and situations reassessed, resulting in lots of “oohs” and “aahs” round the table. There’ll be much wailing and gnashing of teeth also tiles they want are scooped up from under the players’ noses. There's also a lot of fun to be had in calling Ra at points in the game where you know full well you're putting someone else - not you - in a very difficult position decision-wise and you get to gloat merrily while they agonise over what to do. The game also does a very fine job of allowing the potential excitement of a close finish with allowing good players to run away with the game. Some very valuable tile sets are only scored on the final round, which means it’s possible to plan to take early hits on the score and go for a last-minute dash for the line. One can draw ahead of the pack in Ra but it’s difficult, and you always need to be looking over your shoulder in case you suddenly and unexpectedly find one of the other players right there looking back at you. Tight finishes are frequent and exciting.

We conclude, as always, with a rating. Given that this is a brilliant game that plays in under half an hour, I think “always want to play it” is a valid description, provided one is happy to insert a qualification phrase such as “as filler” or “as an evening opener/closer”. So I’m happy to dish out four out of five - a game I'd lobby for and encourage others to play. It’s too fast and too light to get the full five statrs but what it does it does damn near perfectly.

So what of my original aim, to explain why this is such a winner with everyone? Well there are many reasons, some of which we’ve touched on in the review. It has all the simplicity and elegance of the best euros without degenerating into scripted decisions or multiplayer solitaire. It’s so fast and easy with a measure of excitement that it’s hard to hate – even if you consider this mediocre fare would you really begrudge it half an hour of play? So when you’ve got your family up to speed with Ticket to Ride and whatever other gateway games you’ve fed them as an hors d'oeuvre then it’s probably time to slip in some Ra for a little extra refreshment before the main course. Guaranteed to reach the parts other games cannot – whatever your usual choice of flavour. In fact this game is so much fun that it's worth taking a moment to spell out that it's fun - fun with a capital "RA"!