Quarriors: The Most Fun I've Had Throwin Bones Since My Last Trip to the Castro... 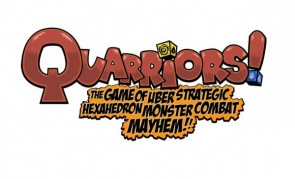 Quarriors bills itself as a “dice-building game” and besides the fact that we should all be mildly embarrassed for understanding what they mean, it’s a pretty right on description. Another right on description is “fucking awesome game” but we’ll get to that in a few…

The mechanics are simple, you start out pulling 6 dice from a base set of dice in your sack. You roll them, and based on what you roll, you’re able to “capture” better dice to add in to your sack and subsequent draws. If you’ve ever played Dominion, Thunderstone or one of the countless other deck building games that seem to get crapped out every other week these days, then you already understand the basics. Ultimately, you’re trying to summon monsters that kill other dudes' monsters before they have a chance to score at the start of each players turn, while keeping your own glorious thralls alive until they off themselves for points.

So ok, it’s a dice game that apes one of the most overused and exploited mechanics in recent memory, why the fuck do I like it so much? Well, coming in to it I was already excited given the pedigree of the two dudes behind it. Mike Elliott designed Thunderstone, one of the few deck builders I actually enjoy playing. And Eric Lang, well, I feel like I owe him at least a hand job for all the fun he’s given me over the last few years, most notably with my 2009 GotY, Chaos in the Old World and it’s recently released balls out awesome expansion The Horned Rat. 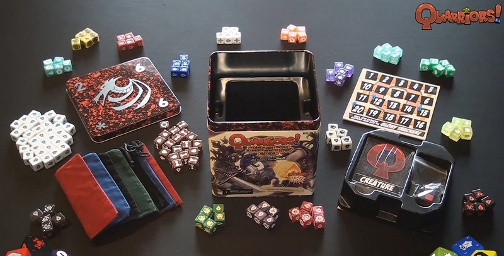 I’m also a sucker for fantasy themes; I would much rather send my dragon to eat your goblin than to use my smelter to turn my ducats into some other kind of ducats so I can buy an even better smelter. Also in the sort-of-silly-that-I-care-yet-actually-means-a-lot category is the fact that I’d be lying if I said that I wouldn’t much rather roll a sack of dice than draw a hand of cards. It may be gimmicky, but there is just something so viscerally pleasing about that clatter only a fistful of dice hitting the table can make. And make no mistake, dice drive everything in the game, with the only other components consisting of what basically amount to reference cards for the various dice you can collect and sacks to hold your ever growing collection of the aforementioned dice. If you really hate dice and luck, well then besides having terrible taste, you are one of the dumbest motherfuckers alive if you decide to give this a go.

This isn’t to say that there is no strategy at all, though the game really is driven by your short term options, but rather that no matter how well laid your plans may be, everything still relies on a roll of the dice. So if the idea of lady luck giving you and your plans the business isn’t your idea of a good time, then you best keep on truckin. For those of you who don’t mind a good bit of chaos to spice things up, you still feel like you are ultimately in charge of your own destiny. There are a number of different overarching strategies I’ve tried out so far, some to great effect and others to great shame. Along with the draw of available monsters and spells being highly variable game to game, I’m surprised by how deep the game actually feels when you start to really dig in and think about what you’re doing. Besides, seeing a perfect draw take a ride to shit town when the dice hit the table creates a lot of energy between the players. 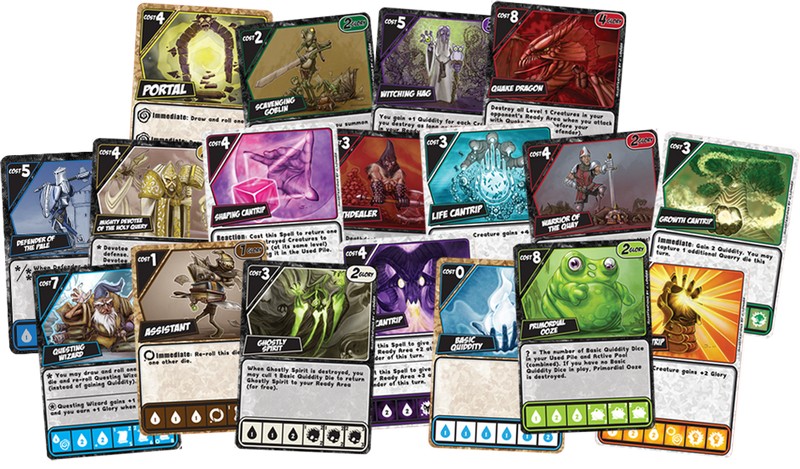 The dice themselves generally look awesome, with some looking absolutely great while a few are sort of ho hum. With all of them though, none look like they fell out of some $15 pound of dice reject sack. They are a bit smaller than the “standard” 16mm size, coming in at 14mm, but really, I had to go look the actual size up, and only mention it cause a bunch of whiney nerds seem to be making a big deal of it on the internet, not because it’s something I even took note of myself. Another nice touch in the physical production that makes a lot of sense is that each creature type has a different set of dice, so like the goblin uses the set of five goblin dice, but there are cards for a few different goblins that have different special abilities and play pretty differently. So while 130 different dice itself is a lot, you also get even more variety with those same sets while keeping production costs reasonable. Though, I must note that a $50 MSRP is pushing it a bit and is likely to keep the game more in the “hobby” ghetto.

Graphically, Quarriors does a great job of walking the line between goofy fun and embarrassing “gamer design”. It's clear that this is a professional production all the way. The character vibe isn’t super serious but it’s still the kind of stuff you’d not be embarrassed to play with your mom; everything, including the fonts and art direction, has a really energetic comic book vibe to it.

Where the need for non-embarrassing nerd input is sorely needed though is in the rules. What’s with the school of thought that says instead of calling the resource in the game that you use to buy dice and summon creatures something like “power” or “mana” or “energy” you decide to call it “quiddity” because it follows some silly naming scheme with the title of the game? Seriously, I feel like an asshole just typing it out, and even worse, that I had to go look up how to spell it in the rulebook. I get it, for whatever reason you decided to call the game Quarriors, a highly questionable decision of its own, but why does that mean that now you need to give everything ridiculous Qu- names? Just use terms from the huge gamer vocabulary we all share, it makes everything so much easier. When people actually talk about the mechanics they are still going to call it power, not use your cute little terms, so just cut the bullshit. At least they didn’t do it for every term in the game; monsters still have “health” not “qua;fsal;kjshdf”.

Further compounding on the confusion of trying to figure out how to play directly from the rule book, is the fact that despite the game actually being really straight forward and simple, the rules are written to be anything but. Now, I play a lot of pretty complicated games with some massive rule books so I don’t think I’m too much of a dumbass when it comes to reading rules, but it took me a lot longer than it needed to for me to really nail down the details of how everything worked. And I’m also someone who knows the underlying x-building game mechanics. On the plus side, while fairly confusing to learn from the rulebook, once you get what’s going on, the rules are mechanically sound without a lot of grey area or weird situations that make no sense. I think this game has the potential to hit the same sort of market penetration as something like Munchkin, but it’s going to rely on people teaching new players the game as much as possible cause the average non-hobby gamer isn’t going to want to deal with this sort of bullshit.

All that said, if my biggest complaints are some lame jokes and a poorly written, yet ultimately understandable rulebook, then we’re looking at a game of the year contender. I can see people bitching that it’s not enough of a “gamers game” or that it’s too luck based or goofy fantasy or whatever other bullshit nerds like to get worked up over, but you know what? I play games to have an awesome time and Quarriors delivers like few other recent releases and takes a flavor of the month mechanic and gives it a sweet little twist to reinvigorate what’s possible. This is the first early review copy of a game I’ve gotten where I can honestly say that I’m really glad I didn’t have to wait another month to get to play it. I’ve already played twenty something times in the last couple weeks and I’m sure that by the time it hits retail in August, I’ll have surpassed fifty. It’s that good. Best put in that preorder!

There are no user reviews for this listing.
Already have an account? Log in now or Create an account
Discuss this article
Log in to comment
Posts in discussion: Quarriors: The Most Fun I've Had Throwin Bones Since My Last Trip to the Castro...