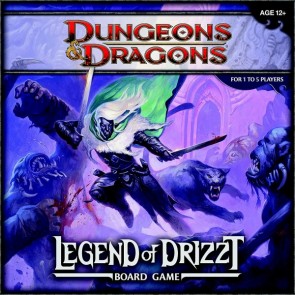 I’ve made no secret of how much I love Wizards of the Coasts new Dungeons & Dragons adventure system board games Castle Ravenloft and Wrath of Ashardalon. I really don’t think it’s much of a stretch to claim that they’ve managed to re-invigorate an otherwise very stale genre of board gaming, or that they offer the best possible experience for board gamers who, like me, want to re-create the thrill of a role-playing session with the tactical sophistication of a board game. Now those two excellent titles have been joined by a new sibling, Legend of Drizzt and WotC supplied me with a copy to review. Will third time prove lucky for this series?

As with my Wrath of Ashardalon review I’m not going to go over the core mechanics of this game here. If you want the low-down on that then check out my original Castle Ravenloft review. Rather I’m going to look at what’s new and different in Legend of Drizzt and how it stacks up against its predecessor titles. Basically the Adventure System games are stripped down, simple, quick-playing co-operative dungeon crawls packed with variety, narrative and excitement and just enough strategy to keep the brain engaged.

Before we continue however, I have a startling admission to make: I know nothing - nothing at all - about Drizzt Do’Urden, the hero whose exploits form the basis for this game. I’ve never read any of the books, and I don’t plan to. I didn’t even know it was supposed to be pronounced “Drisst” until I saw the promotional video for this game. I did do a trawl through the relevant wikipedia articles on the subject to get a proper background for this review, but that’s it. So what you’re going to get is a review from someone focusing on the mechanical qualities of the game, with little appreciation for its narrative or theme. This is, I think, an important point to bear in mind.

The reason is that it’s clear from the outset that the designers have tried very hard, far more so than in previous iterations, to tie the game play of Legend of Drizzt into the source material. This is perhaps a little surprising given the wealth of background material for the Ravenloft setting that could have been used for Castle Ravenloft, but there you go. You’ll see it right away, in the fact that this game contains more characters than its predecessors to make sure all the most popular ones from the books are represented.You’ll see it in the power cards for those heroes, many of which represent well known magical items from the books such as Drizzts’ scimitars Twinkle and Icingdeath. You’ll see it in the villains, many of whom are humanoid NPC style characters rather than the immense monsters found in previous games (although there are still big monsters here, but many have been moved to the monster deck as opposed to being tied to scenarios). You’ll see it in the adventures, many of which appear to mimic plot points from the novels themselves, even down to suggesting which heroes are most in character for each quest.

So, on the plus side this means that you get to re-enact the adventures of Drizzt and his companions in brilliant detail. But there’s a cost for this level of narrative, which is that the game is rather less compatible with its siblings than you might expect and works better as a stand-alone product. Although there are gold values on the items in the treasure deck to ensure they can be used in Wrath of Ashardalon’s campaign system, the game uses “cavern” tiles rather than “dungeon” tiles which are the same shape and size but visibly different in art style and with different text on the back. As befits legendary heroes of epic status, the characters on offer in this game are unbelievably tough. Drizzit himself gets two attacks per turn, plus a possible third from his panther figurine. He’s an absolute killing machine: in common with many other player reports I’ve found that he’s able to finish the introductory solo adventure with such insouciant ease that he’s never yet had to use a healing surge. This means the characters are less portable into the other adventure system games, since they’ll just completely annihilate the standard monster decks in those games, although whether, thematically, you’d want Drizzt wandering around in Strahd’s dungeons is a moot point. The monsters on offer in the monster deck here are rather tougher than those of previous games which compensates to some extent, but the heroes are still able to stomp on most of them without breaking a sweat, and this in turn makes the monster cards less cross-compatible. Given that the adventure system games are already fairly easy - a little too easy for co-operative games - these overpowered heroes aren’t really a good thing. Also, it limits the choices on offer for the heroes in terms of starting powers. Again, taking Drizzt as an example he has to take Twinkle and Icingdeath as his at-will powers to tie in with the magic items he owns in the book, and there are similar restrictions on other characters. So less flexibility, less chance for tactical combinations, less re-playability.

However the powers themselves compensate for this somewhat. The game introduces a new concept of “stances” which are effectively short term tactical sacrifices a character can make for later advantage. Drizzit can, if he has the relevant ability, ready a stance that allows him to take extra movement before or after a normal attack. Bruenor has an ability whereby he can forgo an attach in exchange for getting a first strike against something that attacks him later in the turn. Only three characters have these stances, but each has more than one way of using it meaning there’s more choice and planning involved during a turn. There’s also a new concept of “ally” cards which are friendly units that have an AI routine just like a monster, and take their turn during the villan phase along with the monsters. Drizzt’s magic panther Guenhwyvar is handled in this manner, as is Athrogate’s magical boar, Snorter. This is a really neat idea, building on the concept of “neutral” villagers with an AI from Wrath of Ashardalon and can lead to the occasional merry chase around the dungeon as the characters try and keep up with their rampaging pets. But its main impact is, again, increased tactical choice and consideration as you try to do your best to keep the relatively fragile card-based characters alive while thinking carefully about how best to position everyone in relation to one another for best effect.

Indeed a marginal increase in tactical choice seems to be the biggest improvement on offer here with regards previous games. In addition to the character powers already mentioned, there are now terrain based effects too: narrow corridors that restrict movement (and thus reduce armour class) during combat, lava vent tiles that tie into the encounter deck via particular cards that cause effects on those tiles only, and a general increase in the amount of named tiles and on-board scenery. The spots where monsters appear on new tiles are much more widely distributed, leading to critters sometimes spawning directly adjacent to exploring characters, and some monster AI now varies enormously depending on whether heroes are adjacent, 1 or 2 tiles distant which brings in yet more into consideration as you plan your turn. Curses now offer the player a choice of sacrificing hit points for removal as opposed to a random dice roll. There are a couple of cool new traps to mix things up such as the force trap that pushes heroes away from its tile, forcing a re-assessment of positioning and the horrible goblin machine “Juicer” that rampages through the dungeons crushing heroes but also monsters and so may be something you want to keep around for a few turns to clear the board if you can afford the hit point cost. The treasure deck has the best balance of actual items and fortunes yet encountered in an adventure system game including some neat terrain based effects involving choice for the players.

However the biggest addition to the game are the new competitive adventures. These take the form of team games rather than the more traditional games-master versus the players set-up that’s usually encountered in this genre. There are several takes on this from a team versus team exploration or treasure hunt, through a very cool (if rather unbalanced) hidden traitor scenario to my personal favourite, a prisoner’s dilemma style game where teams can co-operate for a joint win or screw each other over in search of personal glory. Being a huge fan of competitive games in general, I love these and they really do seem to bring something new to the system. The basic concept, especially team treasure hunts, would be relatively easy to port out to the other adventure system games too. With the exception of one gem that has the exits gradually sealed off before the hapless heroes with new "cavern edge" tiles, also used in some scenarios to complete pre-made maps, the other, co-operative, adventures are a bit of a mixed bag, with most of them having neither the creativity seen in Castle Ravenloft or the variety seen in Wrath of Ashardalon. This is probably because they’re mostly based off narratives in the books, but in return of course, if you’ve read the book, you get to re-live your favourite bits on the board. Given the big overall narrative flavour of this offering it’s perhaps surprising, not to mention disappointing, that there’s no equivalent to Wrath of Ashardalon’s campaign system. Let alone the fact that you’re missing out on this fantastic way to enjoy the adventure system games, imagine how great it’d be if you could fight your way through the whole narrative arc of the Drizzt books in game form?

Personally, in spite of the advances on offer, I feel that this is the weakest of the three adventure system titles, although that’s still a little like saying that Michelangelo’s Madonna and Child is weaker than the Sistine Chapel ceiling and his sculpture of David - all three are still superb games. But I suspect that’s more a reflection of my disinterest in Drizzt and the fiction surrounding him than it is of weaknesses in the game itself. Given that there have already been two games using this system, a third was always going to suffer a little from “been there, done that” syndrome and the designers, wisely, opted to do things a little differently and create a game that was more about narrative than it was about fitting in with its predecessors, and as a stand-alone title it does work extremely well. So if you want just one game in this series, or if you absolutely love Drizzt, this could be the one for you. Otherwise, I’m anticipating that there might just be some cool new cross-game adventures in the pipeline from Wizards of the Coast utilising the stuff in this box with Castle Ravenloft and Wrath of Ashardalon in the same brilliantly creative spirit that gave birth to the adventure system in the first place, but you might want to wait and see before putting down the cash.