Farm Living Is The Life For Me - Agricola Re-Review 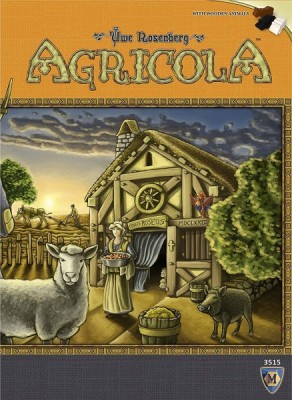 Board gamers aren’t known for responding with half measures. When a game comes out that is kind of a big deal, mildly positive reviews are rare. The game cannot merely be good, it has to be a new benchmark for game design, a perfect 10. It shoots to the top 10 on BGG, and then comes the people who complain about how good the game is. It’s only after about a year or so that we step back and realize that while it may have been pretty good, that’s all it was. We are forced to admit that we were swept up in the frenzy of enthusiasm, and hindsight reveals little persistent flaws that have dampened our enjoyment.

I’m as guilty of being swept away as anyone. When I first played Agricola shortly after its English release in 2008, I immediately wanted to play again, and I did. Like many other people, I was enthralled with what a surprisingly detailed game it was, at least for a Euro design. I liked the crunchy decisions, and I liked that the game was challenging to learn and play well. And so like I always do, I wrote a review saying what a great game it was. You could probably find it on BGG if you cared to look. But little did I know at the time that Agricola was something of a change for me, as it was for many other gamers.

Agricola was one of the first games to utilize the mechanic from Caylus called worker placement. Essentially, the player gets a set of tokens (here they represent family members), and those tokens are placed in turn on different spaces on the board to take an action. It might give you a resource, let you play a card, or even become the next starting player. It is typical for games like this to only allow one worker to be placed in a given spot, and this is the case with Agricola. Like Dominion and deck-building, worker placement has been aped to the point of being a total drag. But Agricola was probably the first game to copy it to such great effect, and definitely the first game to improve on the concept. Players take the role of farmers, trying to eek by a hardscrabble existence in 16th Century Germany. When you take an action, it may allow you to take a resource for building later on, like wood or clay. Or it may give you crops to plant or animals to breed. And of course there are separate actions to do anything with these resources. You start the game with only two workers, but as the game goes on you can make little babies and put them to work in fields as well. Hanging over the entire game is the need to feed your family. A bigger family requires more food, and at every harvest you need to pony up the required amount of food or your family is forced to beg. At the end of 14 turns, the players score different aspects of their farm. There’s several different categories here, so you want to try to get a little bit of everything to succeed.

Some Euros distinguish themselves by forcing you to work against a brutal system, and that’s the case here. The need to secure some kind of food source is probably the first priority in any game. The second priority is usually to secure more family members so that you can take more actions each turn. For a while I had concerns that this singular focus in the game would make for something that plays out the same way every time. But you see, Agricola has an ace up its sleeve. Each player is dealt two hands of cards at the beginning of the game, one of “Occupations” and one of “Minor Improvements.” These represent little tools, gadgets, and skills that you can add to your farm that will give you and only you a certain advantage in the game. There’s a huge amount of these cards right out of the box, something like 350. They aren’t powerful  enough to send the game into Cosmic Encounter territory, and that’s good since Agricola couldn’t handle that kind of chaos. Rather, they make certain that no two games play out the same way. The remind me a lot of the buildings in Puerto Rico, except instead of everyone drawing from the same pool, everyone gets their own group of stuff to choose from.

That’s probably the key thing that has kept Agricola from the trade pile. Every game has proven to be different enough that I can’t play it on autopilot. Every time I need to send a family member to take an action, there are several things to consider. What do I need to do right now? Will that action still be available when my turn comes around again? How am I doing on food? It’s important to plan several moves ahead, but it’s also very difficult. The more players there are in the game, the tougher it will be to really do what you want every turn. Thankfully, they thought of that too. There are extra actions that are added to the game depending on the number of players, so the game will always be just tight enough. Suffice to say, this game has legs. It’s complex enough to hold up to multiple plays, as proven by the scorepad in my box that has grown dangerously thin.

Agricola was significant to me for a couple of reasons. First of all, it was the first time I remember not caring that a game was complex. I had only been a hobby gamer for a year or so at the time, and I was still a little skittish about longer more complex games. Agricola changed all that, since it’s pretty beefy for a Euro game and can take as long as 2.5 hours. It showed me that players in general are able to handle more complexity than I often think. It definitely paved the way for me trying more elaborate games like Battlestar Galactica and Arkham Horror. Don’t misread me, Agricola is not a very complex game. You can figure it out easily. But you’ll spend the first few games staggering around until you learn the system.

Secondly, Agricola flipped a switch in my head. You see, the complexity was easy to swallow because the game has a definite connection to it’s farm setting. That setting doesn’t really bear out in the details. I mean, why can’t you take an action when someone else is already there? Why can only one person build a fence every round? And why does harvest keep coming sooner and sooner every time? Those little abstractions exist to make the game more strategically rich, but they are definitely not true to life on a farm. No, Agricola’s setting works in the broad sense. The type of struggle that’s here grinds against me in other games, but makes perfect sense in farming. And for every strange mechanical touch, there’s another that rings true. I like the way you plant crops to get more stuff to plant. There’s a wonderful physicality to looking on your farm at the end of the game  and seeing your fields and pastures. For some ridiculous reason you get that prideful feeling that your hard work has paid off, even though you’ve just been playing a game.

And like with any game you love, there are things that probably should bother you. There’s almost no interaction to speak of in the game, and it seems strange that there’s no way to trade or anything. And the illustrations do a nice job of keeping everything light and fun, but they also kind of suck in places. Some of the card illustrations give off a definite “homemade soap” vibe. But those are things that I just accepted when I learned the game, and now they don’t bother me. Without those aspects, the game just wouldn’t be Agricola. The only problem I still have with the game is the last turn, when players go out of one harvest immediately into another. It’s at that point that the game can grind to a halt while players figure out how to squeeze an extra two or three points out of their farms and still feed their families. Thankfully that’s only the last turn, but I wish there was a way to speed that up.

I’ve definitely moved on from the Euro game scene. I’m now more into stuff with spaceships and explosions and dice. So it’s strange that I still love Agricola so much. Then again, maybe if more Eurogames had had as much attention to setting and variety as Agricola, I might have stuck with that genre for longer. Uwe Rosenberg has sort of riffing on worker placement for a while now. Le Have, The Gates of Loyang, and Ora and Labora have all built off of some of the stuff that Agricola did first. There are people who like those games better, and I won’t begrudge them that. I’ve only played Le Havre from that bunch, and it was quite good. But Agricola just works better for me. It remains a major turning point for my gaming history, and I expect I’ll be playing it for years to come.