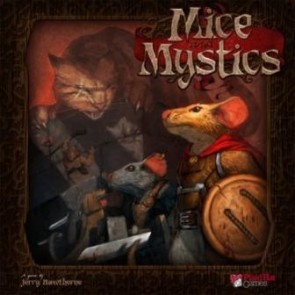 I am one lucky son of a bitch, and you are not. Unless you recently won the lottery or nailed Jessica Alba or something, and then you might also be lucky. Or if the woman you love just agreed to marry you, and you said, 'I'm the luckiest man in the world!', which is not actually true because the same thing happens to guys all over the world, like, every day. Come to think of it, there are a lot of reasons someone might be a lucky bastard. Many of you might be lucky. Heck, you might not have had your firstborn child burn your house down, which would, I dare say, make you luckier than me.

But today, I am lucky because I got to play Mice and Mystics.

My friend Jerry Hawthorne is a nerd from way back. He used to develop stuff for HeroScape, and he's worked on several other games besides. He's also the guy who designed Mice and Mystics, a game that is about to take the entire dungeon-crawl game genre and flip it on its head. And last night, I invited myself over to Jerry's house to try out the first chapter of this fantastic game.

Mice and Mystics is a game about flying lizards. The name is a decoy.

No, wait, that's not right. It's about people who get turned into mice and then battle rats and cats and giant centipedes in a fantasy realm of magic and adventure. It's magical and whimsical and a ridiculously good time, and you'll all be working together to defeat the evil Sinestro (or whatever the evil lady's name is. I can't remember because it's one of those fantasy names that were created by finding a handful of vowels and consonants that sound creepy together and capitalizing the first letter). You'll fight the enemies of truth and goodness using swords and spells and special abilities powered by cheese.

Yes, you heard that right, you'll collect cheese. And the cheese will help you do stuff like hurl lightning from your rod (by which I mean a long wooden stick, not something painful) or heal your wounded companions or smash the piss out of your enemies with a hammer the size of a toothpick (because, you know, you're a mouse). The wizard gets even more cheese to power his spells. You might say he's the cheese wiz. I would not, because that would just be silly.

I'm not going to go into the rules or the components or the art, because for one thing, the rules have been posted online and I hate reading reviews from people whose creative impulse stops after they finish repeating things. For another thing, we were playing a prototype, and while it looked good, it was not the final version. The final version hasn't actually been made yet, and so it would have been rather tricky to play on products that were not yet real things.

Instead, I'll attempt to relay the experience. The game starts off with a story - and this is no paragraph summation, it's a fully developed tale with an evil witch and her dark minions and a team of heroes who set out to stop her. In just about every other game, the story is the introduction (assuming you get a story at all). But in Mice and Mystics, the story is the game, and the game is the story, and you're telling the story until you finish the adventure and put everything back in the box. And after that, you're talking about it, and can't wait to see what happens next time.

For instance, when our intrepid mice jumped into the sewers beneath the castle, they landed in a current that dragged them downstream. A squad of evil rats followed them and attacked while they were vulnerable. One brave soul climbed out, soaking but resolute, and held off the advancing enemy while the rest of his friends clambered out on the other side. With a desperate attack, that stalwart warrior finished off the last of his opponents before leaping back into the water and relying on his friends to drag him to safety. It was very swashbuckly. That mouse was quite the hero (he was played by me).

Later, while attempting to alert the cook (the last human ally the mice had in the castle), the heroes ran afoul of Brodie, the castle cat, who grabbed the powerful wizard Maginos in his mouth and went on a spree of violence. That same heroic warrior from the sewers smashed Brodie's foot, forcing him to release the mage and abandon the kitchen. From this point forward, that mighty hero was known as the Cat Tamer, and was a fearsome foe against all giant opponents who would bar his way.

Later still, in the mouse-sized tunnels beneath the castle, the heroes were ambushed by a giant centipede and a particularly poisonous spider. The mighty hero stood his ground, but was overcome by the onslaught of the insectoid villains, leaving the fight to his three terrified companions. After a vicious (and decidedly close) battle, the surviving heroes were victorious, and were able to restore the powerful Cat Tamer and continue their escape.

Basically, this was a thrilling story. It was like living inside a beautifully illustrated cartoon. I could picture the desperate stands, the ferocious brawls, and the hurried flight through caverns teeming with danger and death. I could hear the battle squeaks and the clashing blades, feel the cold stones beneath my mousy feet, and smell the wet fur (though that smell may have been Jerry's dogs).

One exceptionally valid concern that you might have with a game like Mice and Mystics is that it could have limited repeat play value. I am always amused when I hear people with this complaint, people who say, 'but after I play it a dozen times, I'm not going to want to play again!' This complaint is amusingly ridiculous because I can count on two hands the number of games I've played a dozen times, and if you ask me, when you can play any game a dozen times before it gets old, then you've definitely had your money's worth.

But let's say you are concerned, because let's pretend you're one of the seven people in North America who plays a game more than three times before it gets boxed up and forgotten. In that case, you're right, once you finish the eleven chapters that come with Mice and Mystics (which will probably take more like 15-20 plays, since you're not going to win every time), you're basically out of reasons to play.

And that's why I asked Jerry what else was coming. His answer was immensely reassuring. Plaid Hat Games has plans for lots and lots of expansion material, including both physical releases and online expansions that will allow you to get even more play out of your game without having to spend another dime. Jerry made me promise not to tell you what's coming, but I'll tell you right now, it's going to be awesome. You're going to love it.

If you're on the fence about the preorder, jump off already. Mice and Mystics is a game designed to fill you with a child-like sense of wonder and adventure, and there's more charm in the first paragraph of the first chapter of the tale than there is in most of your other games combined. You can play it with little kids, and you can play it with a room of jaded old men. It combines everything I love in a game with an enduring story that you'll be talking about for days. I haven't enjoyed a game this much since Risk Legacy, and that was my favorite game of the last decade. This is the game every other dungeon crawler wants to be when it grows up.

For a limited time, you can order Mice and Mystics from Plaid Hat Games at an amazing preorder deal, and even score a couple promo cards. I strongly encourage anyone with even a passing interest in this game to take them up on this deal.

Disclaimer 1: The creator of Mice and Mystics has been a friend of mine for many years. Almost a decade, actually.

Disclaimer 2: I've reviewed lots of games made by my friends, and have panned the bejeezus out of several of them. So if you're thinking of telling me I'm biased because I like the guy who made this game, you can kiss my bloated, hairy ass.