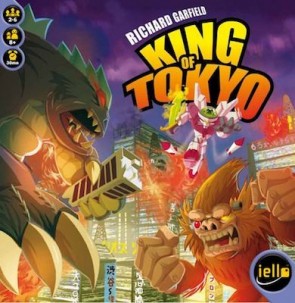 You  know those last moments of a convention? You’ve stayed up til the wee hours for three nights in a row, and you’re just killing time before the last door prizes are awarded. Might as well learn a new game,  but for the love of heaven, not something heavy. You’ve spent the whole convention learning 3-4 hour games. This is the situation I found myself in when I first played King of Tokyo earlier this year. Since none of us know how to play, we learn from the rules, which is usually a no-no. But in this case, it’s not bad at all. We’re up and running in about fifteen minutes. After one game, we’ve gotten a feel for the rules, for the different dynamics and interactions. So hey, might as well play a second game. That’s a good move, because by now the rules are totally internalized, and we can focus on trying to push each other around. But the third game? That is the coup de grace. Because after two previous games, we now have some grudges. We all have someone we want to take down. And it was at that point that my experience with King of Tokyo became something special. It’s a good thing the game wasn’t available at the con, because otherwise you couldn’t have stopped me from buying it.

The word “filler” was invented to insult short games. We all think that the good games are big and long, and then something like King of Tokyo comes along and makes a case for why short light games are what most of the rest of the world plays. It’s simple, quick, highly interactive, and most importantly, it’s a blast to play. I haven’t been this impressed with a game of this weight since I played Ticket to Ride, and I have a sneaking suspicion that King of Tokyo is better. In fact, it might be the best light game I know of.

At the very least, it’s easily the best dice game I’ve played. Like other games, it borrows the “three rolls” mechanic from Yahtzee. You play as a giant monster,  and your goal is to either get to 20 points or to be the last monster standing. The dice give you ways to attack the other players, regain health, score points, or gain energy, which is used to buy special power cards. The first player to roll an attack ends up in Tokyo, where they rain down destruction on the other players and rack up bigger points. But you can’t heal in Tokyo, so you’ll eventually run off and let someone else take your place while you lick your wounds. If you lose all your life points, you’re out, but if you get to 20 points you are indeed the titular ruler.

King of Tokyo was designed by Richard Garfield, whom you may know from his better known design,  Robo-Rally. Oh, and he also designed a little indie hit called Magic: The Gathering. This remarkable game is the result of a designer who knows how to make all the right decisions. It’s a little like seeing Martin Scorcese create the world’s funniest comedy. There isn’t a single point where King of Tokyo falters. Hyperbole? Perhaps. But after ten games (including two separate instances of three games in a row), I still can’t think of anything in particular that I would improve.

My favorite part is that it addresses the single biggest problem with dice games: lack of interaction. Think about Roll Through The Ages or Zombie Dice, both fine games in their own right. You roll your dice, you take some risks, you score some points, and you pass the dice. Then the next person does their own thing. At no point do you ever really worry about what they’re doing. Oh, there might be a little effect that will impact your opponents. But overall, you’re in your own lane. This is emphatically not the case in King of Tokyo. You play every game with eyes up. Every decision you make is about how it will affect the other players and knock them down, or else how you can push yourself ahead of them. Later in the game, most turns are punctuated by a healthy level of trash-talking and name-calling. It never feels really nasty or mean-spirited, since you don’t actually have a choice of who to attack. You just deal out damage whenever able, and then smile smugly as Gigazaur is knocked out of the game. It’s like all of the bonus of player conflict with none of the downside. And it’s not just a silly dice-off either. There are some actual challenging decisions to be made as to which dice to keep and which to roll. You really need to pummel the guy in Tokyo, but you really need health too. Such decisions strike the perfect balance between challenge and speed, and the game moves along at a brisk pace. I would say 30 minutes is a generous estimate for a single game.

Every dice game involves a certain measure of risk, but King of Tokyo adds to that risk with a king-of-the-hill mechanic. You can stay in Tokyo one more turn, but as your health gets lower it’s more likely that someone will knock you out before you can leave. But wait, you say. Surely they can’t roll five attacks in one turn! I can guarantee that as soon as you make that assumption, they absolutely will roll five attacks in one turn, and maybe one more just for spite. This happens because the mechanics actively encourage a certain level of foolhardiness. You try to fly as high as you can before the sun melts those wax wings, and maybe THIS time it’ll be good enough to win the game. There are also special power cards that can be bought to give your monster a little extra boost. Some have lamented the lack of individual powers for the monsters, but that’s wrong-headed. The cards grant pretty much the exact same thing, and they do so with fewer up-front rules to mess with. And while most games would give a mere 24 cards, here there’s a big stack of them. That makes each game play out very differently. It’s just another example of a small decision that made the game immeasurably better.

If I’m going to praise Richard Garfield for his design work, then I also need to praise Iello for their presentation. In short, King of Tokyo looks terrific. It’s not just the graphic design, although that’s impeccable. It’s the illustrations. The individual monsters are all overflowing with personality. There isn’t any difference between them, but you will certainly form an illogical attachment to one of them. (I’m an Alienoid guy.) There’s so much in the character art that your mind individualizes them for you. And the cards and components are all top-notch, lovingly illustrated and clear to use. This is important for the game, because it really sells the idea of monsters destroying Tokyo. Theme and setting come not just from mechanics, but from good use of artwork. That’s definitely the case here.

Trust me when I say this, because I do not say it lightly: buy this game. If you like to play the odd game of Carcassonne with your in-laws, buy it. If you have kids who like to join adults around the game table, this is a game for you. If you’re looking for something to throw on the table as people arrive at game night, look no further. Even the quietest people at the table will eventually be all smiles, and I’d be shocked if someone doesn’t suggest a second game. Only the most joyless of gamers would turn this one down. It’s rare that a light dice game can compete with the big epics. It’s rarer still when it surpasses most of them.