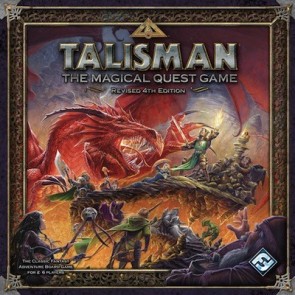 I have a genre of games that I like to call “stupider like a fox.”  These games are profoundly silly, filled with ways for your planning to be rendered moot by simple bad luck. While this might make a lesser game aggravating, if a game goes far enough, it comes back around to being terrific. Only a couple games I’ve played have really been able to swing for the fence of stupidity and succeed so wildly. Magical Athlete and Dungeonquest are two such games.  But before them, there was Talisman.

One doesn’t really “review” a game like Talisman, because it’s positively monolithic. Nothing in the game feels artificial or calculated. It simply is. If Talisman had never been released, we would feel its absence. We’d look at our shelves and wonder why a game like it had never been invented. Fortunately, it does exist. Whether or not you will like it is another story. That uncompromising quality is a strength, but only if you’re buying what its selling. I’ve read some positively venomous statements about the game, and I have to roll my eyes and think “They just don’t get it!” In no way do I mean that  to be condescending. It’s simply that kind of a game.

You play an adventurer who travels around a fantasy land. You roll the die, move in either direction, and have an encounter where you land. Usually that means you draw a card, but it could also be an action tied to that spot on the board, or another player whom you can brawl with. The card you draw could be a monster, or it could be treasure. There’s not a lot of rhyme or reason to what could happen here. You might get a back of gold, or you might fight a dragon. Defeating monsters will let you boost your character’s stats, and when you’re tough enough you can venture into the middle region of the board, where the spaces are tougher and the stakes higher. And after that you can move to the inner region, where you seek the Crown of Command, which will allow you to destroy your opponents. If you managed to level the competition while sitting on the Crown, you win the game. It resembles nothing so much as a combination of Dungeons & Dragons and Monopoly, which is not meant as a slight to anyone involved.

I can certainly see why people wouldn’t like this. In a world where games are fussed over by nerds and armchair designers, Talisman seems positively primeval. As the kids say, there’s not a lot of “game” there. There’s almost nothing in this game that doesn’t involve rolling the dice at some point. You roll to move, to fight, to see what happens to you on most spots on the board . You even roll to cast the spell to defeat your opponents at the Crown of Command. If “meaningful decisions” are what you’re after, then you’d best look elsewhere. It’s a game from a bygone era, and to wonder why it doesn’t have things like balance and strategy is like wondering why that Buster Keaton fellow didn’t talk more in his movies.

And like the dreamlike beauty of silent movies, there is also a certain loveliness to Talisman. I’m not sure how to express this, but there can be such a thing as “too much game.” This can be a big problem in heavy games, where you are always tracking what phase it is, and adjusting cubes on a board, and recording info with those dials that FFG is so in love with. There’s nothing wrong with a heavy game that has a ton of rules, but neither is there anything wrong with just kicking back and truly playing your games. Nothing in Talisman feels like work. It’s probably the only fantasy adventure game I will ever play with my wife, because I don’t have to refresh the rules for her, or look them up myself. And while random games may mean I won’t do better for thinking, it also means that everyone is mostly on a level playing field.

No discussion of Talisman would be complete without mentioning the length, which floats from 2-4 hours depending on number of players and whatever might happen on the board. There’s no way around it: Talisman can take a while. There are a couple reasons for this, but the biggest one is the endgame. Modern games have a tendency to advance even when people are doing nothing. Either there’s a set number of turns, or some other trigger that will end the whole thing. But as in Titan and Antiquity, you can fart around doing nothing in Talisman for hours, and the game won’t end. You must be intentional about ending it, by choosing when to push into the next region. If you know the game, it won’t take nearly as long. It’s very easy to overestimate what it will take to get into the next region. There are a couple other ways to shorten the game (like reducing the number of strength/craft to level up from 7 to 5, which we do), but really I’d just advise you to deal with it. If you aren’t screwing around too much it won’t take forever. And anyway, Talisman is perhaps the perfect board game to play at a party. You can easily play with stuff going on in the background. I think it’d be ideal for inviting some friends over, turning on the game, and getting your adventure on.

Basically, Talisman just doesn’t have many moving parts. That’s a feature, not a bug. It allows you to really enjoy watching your character advance as they level up and gain items. It makes the game tough to break, so your group can mess around with it to your hearts content. And unlike many modern games, it isn’t sunk by piling on expansions. While most fantasy games can handle maybe 1 or 2, my set has three and isn’t showing any seams. Oh sure, the encounter deck has to be split in two. But that seems like such a Talisman thing to do.

It’s a good thing that it handles expansions well, because there are a bunch of them. As published by Fantasy Flight games, Talisman has seven add-ons under its belt, and I assume at least one more is in the hopper. FFG is printing the fourth edition of the game, and while it may never top the vaunted second edition, it’s one of their best and most accessible products. It likely does very well for them, and not among normal hobbyists. That tells me that everyday folks buy this one and enjoy it. That should say at least a little about its appeal.

I wouldn’t say that I’m always in the mood for Talisman. Sometimes it’s just a little too light, and it really needs everyone to be on board for it to work. It would be torturous to play with someone who was complaining the whole time, because it’s not the sort of game that “opens up.” But my game shelf is richer for its presence. Talisman is the sort of game that can only be described by it’s own title. And one day it’ll happen where you can win a game as long as this particular roll isn’t a “1.” You’ll think and wish and hope and pray that you don’t roll a “1.” Friends, when you roll that “1,” you’ll think to yourself “that’s so Talisman.” That is staying power.