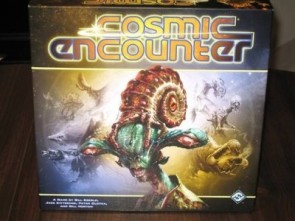 The dawn of a new era is upon us. The warships of The Void and their ally, the mighty Zombie, swarm from the warp gate and begin their descent. An injured fleet of Pacifists awaits, alone, ready to make their final stand to protect their last barren planet. Stripped of their ability to win through negotiation, all hope is lost. They are brutally defeated. And a new cosmic oligarchy is born from this intergalactic turmoil, a new era begins; Pacifists enslaved and scattered, Void and Zombie ruling together… at least until the next Cosmic Encounter.

Cosmic Encounter is a game that many of you will have heard of, and have probably played, but it is a game that I could not pass up reviewing for the sake of the few left in the dark. Known and loved by many for decades, this game of space conquest is short, sweet, competitive, and thematically perfect. Originally designed in mid-1970’s, the first edition of the game was released in 1977 by the designers’ own Eon Games. Since then it has been re-released by a variety of companies, the most recent of which being Fantasy Flight.

The Fantasy Flight version, which is the edition on my shelf, stays true to the original in many ways. As far as basic mechanics are concerned, they have been simply polished, and the game’s corny yet endearing seventies space aesthetic is just as strong as ever. This makes it plenty easy to sink into the Cosmic Encounter universe, and upon opening the box you’ll soon feel allegiance to whatever bizarre alien race you happen to control. Plus, like most Fantasy Flight releases, the components are high quality and beautiful to look at (something that I consider more important than it really is perhaps).

For those unfamiliar, Cosmic Encounter plays 3-5 players, lasts an average of an hour, and is perfect for any amount of backstabbing, negotiation, and pummeling you can imagine. The object of the game is to find a way to colonize five of your opponents’ planets in any combination using a simple mechanic which constitutes the majority of the game. At the beginning of your turn, you pull a destiny card, which pits you against one of your opponents. You choose a planet in their system to encounter, a battle or negotiation ensues depending on what encounter cards each player has secretly chosen, and if the offense prevails, they find themselves happily settling a new homeworld.

What makes this fairly straightforward game interesting however is two things. The first being that before the beginning of each game, each player is given two random race cards to choose from, and each race has its own special ability. From the Masochist, who wins the game if all their ships are destroyed, to the Dictator, who controls the destiny deck on all but their own turn, these races interact in interesting ways, as well as change each player’s strategy completely. And there are upwards to forty races (Fantasy Flight Edition). So every time you play Cosmic, it’s a different game. Sure the core is the same, but gameplay itself can be completely turned upside down from one game to the next.

The second mechanic adding more dimension to Cosmic is the ability for players to ally with one another during conflict. This ensures an immense amount of bartering, deal making and breaking, and manipulation between players. And it simultaneously keeps all players interested in every moment of the game. There’s no down time for anyone. And that’s something even many great games do not achieve (Talisman for instance).

One final note of interest regarding mechanics is that the game allows for simultaneous victory. More often than not (in my personal experience) games end in two or more players deciding to ally and crush the others for the win. Some might find this dissatisfying, but I love the utter despair on an opponents face when they realize they have been unapologetically obliterated by all of their friends, and are the only one left short of triumph. If this seems appealing to you, then I like your style. Also, you will like this game.

For those seeking more depth than I have described here, have no fear, Fantasy Flight has included all kinds of bells and whistles to over-complicate a good core game. The first augmentation available is ‘flare’ cards. These cards are extremely powerful, and essentially mimic the special abilities of various alien races in the game, although they are watered down some to keep things from getting out of control. Personally, I’m not a fan of how chaotic the game becomes with flares, but my game group has altered their use with some house rules that give them less influence to curb this. There is also an entire research mechanic that allows players to develop technology. I won’t comment too much on this as I haven’t played them often enough to have a valid opinion, but I can say that they are extremely powerful when developed, one even allowing a player to destroy an opponents planet.

Anyhow, that’s Cosmic Encounter 101. Its a medium weight game (perfect for those nights you have to be home to get up early for work),  filled with strategy, some luck, and great aesthetic. If at this point you are thinking to yourself “hmm, this sounds like a great board game…I like extraterrestrials and pummeling my friends in space,” than I’ve done my job. If not, and this review hasn't convinced you to pick up a copy of Cosmic Encounter, then ignore it. I've failed miserably, because this game is fun, really really fun. And at the end of the day that’s what board games are all about. That and aliens, lots and lots of aliens.

Thanks for reading Dice Temple! More reviews at dicetemple.tumblr.com. Any questions, comments, concerns, or potential review inquiries (much appreciated!) can be sent to maloney_andrew_t(at)yahoo.com.