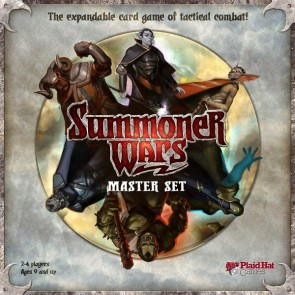 For days this battle has raged, on the marsh-ridden border at the base of the mountains. On the edge of their lands the undead of the Fallen Kingdom seem to regenerate with an uncanny vigor only their dark magic would allow. The Mountain Vargath, the Ram-men of the North, strong in stock and strength, peer down from their chilled homeland at these atrocities and ready themselves for one last fierce encounter for preservation. The Summoner War ends here.

There are few games I’ve played that are simultaneously as stripped down and impressive as Summoner Wars. The rules can be learned in a matter of minutes, and yet the gameplay seems to offer much more than you would expect from such a straightforward production. In fact, unit movement and combat, and the objective of the game (to kill the other player’s summoner) almost seems too simple. But the magic in this game’s design lies in the variety of strategy each faction within the game allows their controller.

In Summoner Wars, players face off on a gridded map (see picture up top). Each space in the grid can be occupied by a unit. You are given the chance to move up to three units a turn a maximum of two spaces, and the chance to attack with three units. Summoning, or playing new units, is payed for by discarding cards out of your ‘magic pile.’ You are given a phase each turn to put cards from your hand into this pile, and any enemy units you destroy go to this pile as well (another clever mechanic). Turns are also augmented with the use of event cards which do a number of things depending on faction, including damaging enemy units, healing your own units, and giving your summoner special abilities temporarily. This is the entire game. That’s it. And yet within Summoner Wars’ simplicity there is a compelling core, all revolving around how well diversified and balanced the factions are.

From the Phoenix Elves, who concentrate on steady damage, to the Fallen Kingdom who balance self-destruction for power, each faction feels a completely different way when played. This is achieved through several points of design. The first, and my favorite, is that every single unit in the game, no matter how weak or powerful, has a special ability. There are no pawns in this game, every card has the potential to be used in a way that your opponent does not have access too. (Unless you were playing the same faction I suppose, but that’s lame.) The second way this is achieved is that no two factions are given the same event cards. Which means that trump card in your hand you’ve been saving for the final blow isn’t going to jump out at you from your opponent’s hand. Although they might have something unbeknownst to you, that will mash your goblins into paste.

One final detail I found interesting about this game is that you almost always burn through your entire deck in any given game. You won’t be sitting around hoping you pull your restricted Arcbound Ravager, or that last City Of Brass to complete your deadly combo, because your going to see every last card in your deck. Every. Single. One. *sigh of satisfaction*

So final thoughts on Summoner Wars: Its an easy to learn game, with high variety in gameplay. Its theme is well developed, and its duration isn’t overwhelming by any means, averaging about a half an hour. If your looking for a game for adolescent gamers to further lure them to the dark side of hobbyist obsession, this is a good pick. If you yourself just need a fast-paced, medium-light game to get a fix in, also a great pick. So check it out, Plaid Hat Games and designer Colby Dauch are to be commended for this one.

Thanks for reading Dice Temple. More reviews at dicetemple.tumblr.com. Questions, comments, concerns, and potential game review inquiries (much appreciated!) can be sent to maloney_andrew_t(at)yahoo.com.