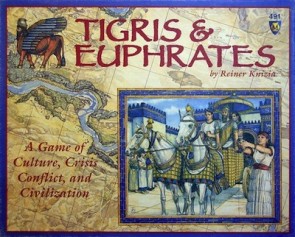 Let me set the scene for you. I have only been in the hobby a matter of months. I’ve cut my teeth on most of the important Eurogames of the day, methodically going through and marking games off the list as I finally experience them for myself. I’d done the “gateways” like The Settlers of Catan and Carcassonne. I’d hit some of the most important “heavier” games like Puerto Rico and El Grande. So when a friend invited me to play his copy of Tigris & Euphrates, I was excited. This was a classic from the great Reiner Knizia!

I’m sad to report that that particular session was a complete disaster. The game was boggling to me, going against numerous conventions I relied upon to make learning games easier. One player took forever on every turn. Another player seemed to be playing almost randomly. It took two-and-a-half hours, and the end was a merciful release, like finally being able to find a bathroom after a long car ride.

What I didn’t realize at the time was that bad gaming sessions are not always indicitive of bad games. For reasons that mostly involved being able to hang out with a girl I kind of liked (and eventually married), I agreed to sit as a fourth in another game of Tigris & Euphrates about six months later. And to my astonishment, I had a ball. Maybe it was the other players, maybe it was my one game of experience, maybe it was because my future wife was at the table. But regardless of the reason, I found myself enjoying the game, the opposite reaction to my first time playing.

Tigris & Euphrates is in a two-horse race with Ra for my favorite game by Reiner Knizia. Originally released in 1998, it was the first game in the unbelievable hot streak that Knizia would have for at least the next five years. That stretch included personal favorites like Battle Line, Ra, and Lord of the Rings, as well as award winners like Taj Mahal, Lost Cities, and Amun-Re. I don’t think any designer has ever had so much success in a span like that, and Tigris & Euphrates was the opening salvo.

You play a dynasty in ancient Mesopotamia. You have four leaders, each one representing a sphere of ruling. Your task is to place these leaders in different kingdoms on the board and collect cubes whenever someone adds a tile to that kingdom that matches your leader’s color. Ideally you will place tiles where your leaders can get cubes, but this becomes more complex as more leaders enter play. There can only be one leader of each color in a kingdom, so placing a same-colored leader in a kingdom triggers an internal conflict, from which only one can emerge. There can also be external conflicts when two kingdoms are joined by a tile, thus creating redundant leaders. Both kinds of conflicts are resolved differently, which makes for a somewhat steep learning curve. But the effect is striking. Each conflict can be a huge impact, forever changing the landscape of the board and throwing the pecking order of the players in disarray. At the end of the game, the player who has the most cube sets of all four colors wins the game.

It’s easy to see why I didn’t take to it right away. There are many mechanics that seem counter-intuitive to a neophyte gamer, like the lack of “territory” on the board and the strange way to win. The biggest one though is that it goes against the trained wisdom that the player is represented by a color. Oh, there are four colors, but they represent different aspects of Mesopotamian kingdoms. The player is represented by a little symbol. This is one of those little leaps that seems simple, but it’s surprisingly hard to unlearn to associate yourself with a color. Besides that, it’s difficult to figure out exactly what kind of game it is. Is it a tile-laying game? Yes, but it’s not as dry as I tend to find that genre. Is it a game of conquest? Well, you take things over from other players, but it’s hardly dudes-on-a-map. There’s even a sort of zoomed-out civilization game there, but it’s heavily abstracted. The only possible game that I could compare it to is the Sid Sackson classic, Acquire. Both games challenge the idea of ownership in a game, both have a heavy dose of luck in a tile draw, and both involve the merging and competition over a series of entities (hotel chains in Acquire, kingdoms in Tigris and Euphrates).

On a deeper level, both games know precisely how to utilize abstraction to create something unique. I’ve heard and read many complaints about the abstract nature of Tigris & Euphrates, and such complaints are not unfair. The four colors tie thematically to things like religion and trade, but in practice you only ever refer to them by their color. And the simple structure of a turn, where each player takes two actions and is done, means that the entire system is too streamlined to really invest too much into what’s happening. But at the macro level, I have found Tigris & Euphrates to be more thematic than advertised. The different colors actually DO stand out when you think about them. The farms (blue tiles) must all be built along the river. The government (black) tiles allow a player to assume the authority of other spheres when those leaders aren’t present. The trade (green) tiles helps the player procure valuable treasures. And just try and win an internal conflict without the help of the religious establishment (represented by red).

But it’s more than that. The game really does feel like the rise and fall of kingdoms and rulers. There’s an epic sweep to how kingdoms expand and are then devastated, how rulers can do so well and then fall to their rival dynasties. The game does feel abstract, but this is partially because it makes little effort to disguise its mechanics. It doesn’t try to connect everything to a thematic point. It’s only in examining why things are done the way they are that you see those little touches that make the game richer.

Tigris & Euphrates breaks away from a ton of established Eurogame dogma. It doesn’t involve victory points as such. It isn’t really an efficiency game, since a hot start will often be rendered moot by the end. The board can be highly dynamic, and change on a single move. And the tile draw is relentlessly fickle, denying players the colors they need at the worst possible time. Strange that these qualities have not been emulated much in the years since its release. Then again, this is not an easy design to crack. It doesn’t reveal its mysteries quickly, and it pays off with more experience.

I’m glad I gave it the time to get there. It’s the rare game experience that I haven’t been able to approximate with any other titles, even the afore-mentioned Acquire. In a crowded market filled with games that ape more successful ones, that’s a rare quality. I’m thankful that this game has been there as my own tastes have risen and fallen and evolved. It’s the rare modern design that has earned the title of “classic.”