Throw Me The Idol! - Escape: The Curse of the Temple Review 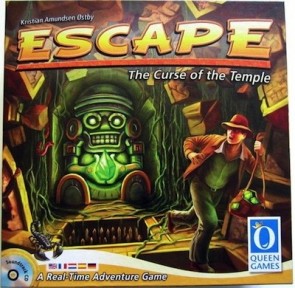 Game Name
Escape: The Curse of the Temple
Publisher
Queen Games
There Will Be Games

Escape: The Curse of the Temple is not a perfect game, but it has one thing that is a good sign: I always want to play it again. It’s like an enormous tin of cookies that you keep eating until you realize that half the tin is gone and you actually feel a little sick. I went to a game day a couple of weeks ago, and taught the game to a friend or two. We played, no joke, about seven times right then and there. There’s no such thing as only one game of Escape. It only exists in the plural.

The scenario is basically the opening to Raiders of the Lost Ark. The players are adventurers stuck deep in the bowels of a temple, and you need to escape before the temple collapses. Each player has a set of five custom dice. You roll these and choose which ones to save until you get the combination you need to accomplish whatever action you were attempting. That may be to move into the next room, or to discover the next room in the temple. If you roll a little black mask, that die is “accursed” and has to stay on that black mask until you roll a gold mask, which lifts the curse on up to two dice. Some rooms in the temple allow you to place gems on them if you roll enough of a certain icon. Placing more gems around the temple will make it easier for the players to exit at the end, so you’ll want to do this as often as possible. Escape: The Curse of the Temple isn’t divided into turns. Rather, the players all roll at the same time as fast as they can, while a CD soundtrack gives cues for what needs to happen next. It will periodically signal that all of the players need to rush back to the starting tile by the time the door closes, or they lose a die for the rest of the game. The third such countdown actually signals that the temple is collapsing, and that all of the players need to find the exit and try to escape the temple. If everyone gets out, the players win.

It reminds me a little of Vlaada Chvatil’s remarkable Space Alert, the only other game I can think of with a CD soundtrack that gives cues to the players. But where Space Alert is detailed and complex, Escape: The Curse of the Temple is much lighter and goofier. The sight of a table full of people rolling dice at the same time is the sort of thing that draws a crowd. Not only that, but it turns everyone into a frantic mess. This is because there are some circumstances where the results of a roll can be used to aid or otherwise help another player. For example, you can use a yellow mask you rolled to un-curse someone else’s die if your in the same room. That means that someone who has all their dice cursed is going to cry for help to the other players until someone comes up to help them. It’s chaotic, noisy, and awesome.

There are a couple things here that bother me. First of all, I’m not a big fan of the game requiring you to race back to the center of the board periodically, not because it’s particularly difficult, but because it feels forced and gamey. It makes the game harder, but not in a very organic way. It also bothers me more than it should that the mechanic of the gems doesn’t have any overt thematic connection. Neither of those concerns are an issue while the game is in progress, so it’s probably just a case of me overthinking it. A much bigger problem is that of the soundtrack. The cues are frustratingly difficult to parse out, especially with the ambient sound and music. Once you know what to listen for it’s not as big of  a problem, but even then you’ll have to turn it up pretty loud to make sure you can hear what’s going on. It’s hardly enough to cripple the game, but it shouldn’t be a problem at all.

Those issues aren’t really that big deal though, because Escape: The Curse of the Temple is the kind of game that exists entirely in the moment. It’s not really about mechanical brilliance so much as it’s about going through that pressure cooker with your friends. It’s an entirely different kind of cooperative experience, in that it’s only about planning in the most seat-of-your-pants sense. When the soundtrack begins, you have a couple of seconds to discuss who will go in what direction, but after that everything is on the fly. There’s no time to discuss or even really think. You just roll to do everything as quickly as possible. Some might think this is altogether too bonkers to be enjoyable, but for us it’s resulted in some of the biggest laughs we’ve ever had in a game. My favorite was when my friend got stuck with all his dice cursed, and we had to find a way to meet up with him by exploring our way to him. By some miracle we actually made it all the way up there, and then we died trying to escape. We laughed so hard that we had to take a fifteen minute break before we could do anything else. There’s a bit of that futility that you get from games like Dungeonquest, the only difference being that Escape: The Curse of the Temple feels like it was designed to make the game at least occasionally winnable.

The difficulty can vary wildly depending on several factors, such as how the rooms come into play or whether you can ever roll what you need to. I do think it’s easier with more players, since it’s less likely you’ll find yourself stuck with a lot of cursed dice and be forced to use the costly fail-safe move that allows you to reroll those black masks. Of course, however easy you find the game, you should move to the “full” version as quickly as possible. That’s where all of the empty rooms have treasures or curses. Treasures are little power-ups that you need to open with a specific die combination, and curses strike you when you discover the appropriate rooms. The curses range from minor hassles (like requiring the player to put one hand on their head) to the infuriating (like preventing a player from discovering new rooms or moving). My favorite is the one that requires a player to lose a die permanently if it falls off the table. The curses and treasures are pretty clearly how the game was meant to be played, and they push it even further over the cliff on insanity. There are a lot of other ways to tinker with the difficulty, as well as other variants in the box to spice it up. There’s already an expansion out that adds some other stuff and a sixth player too.

Escape: The Curse of the Temple is unusual, raucous, and impossible to take seriously. A lot of people will see it at a game night and watch everyone chuck dice and yell, and they’ll wish that they were playing, and when the inevitable next game starts up they’ll try to get in on it. No doubt some more serious gamers will find such insanity to be a little circle of hell. That’s not unfair, but it’s the kind of game that I get excited to teach to new people. All you can do is smile and assure them that they are in for a treat.