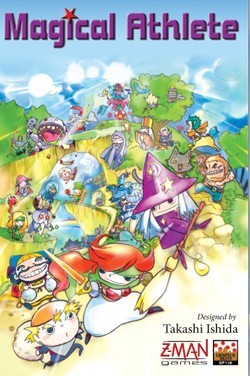 If I’m really honest with myself, I sometimes resent playing games with non-gamers. That’s not meant as a slight against anyone at all, just the admission of a selfish gamer. I always worry that I’ll pick something complex that they won’t like, or that I’ll have to hold their hand through  the whole experience. The fact that this usually isn’t a problem doesn’t keep the fear from rising up in my throat. I am jealous of my game-playing time these days, so it takes effort to get over myself and just play something. To do that, I keep a stable of standbys handy that I know can be introduced to most people without breaking a sweat. It includes some common games like Settlers of Catan and Acquire, as well as some less usual ones like King of Tokyo and Citadels. But one of my favorites to trot out with non-gamers is Magical Athlete. As it happens, it’s also one of my favorite games to play with regular gamers too. In fact, let’s just stop this awkward segue and say that it’s one of my favorite games, period.

Magical Athlete has an absurdly simple premise. A bunch of magical people (let’s call them “athletes”) are holding a magical race in their magical land of magic. There are twenty-five contestants, each with their own unique power. The game is divided into two phases. In the first, each player must form a team of racers using a very simple draft. In the second, the players hold a series of races where they each select one of their team to run. The races are very simple: roll the dice and move that many spaces. Points are awarded for first and second place, and after four or five races the player with the highest score wins.

Of course the rub is that each of the characters have their own special power, and they interact with each other and the die rolls in wildly unpredictable ways. The funny thing here is that some of the characters are absurdly powerful, and some are unbelievably bad. The Merchant has the power to switch places with another character instead of rolling, and the Amazon can move five spaces every turn without a roll. On the other end is the Thief, who simply steals a point once and is useless after that. Then there’s the whole category of “awesome-when-it-works,” like the Cupid, who gets to move five spaces if a male and female character share a space. The Prophet predicts who will win, and automatically gets second if she’s right. Five characters are removed from the game every time to shake things up a little too.

I’ve explained Magical Athlete many times, and I usually get a strange look when I’m done. It’s a look that says “You’re kidding, right?” It sounds stupid and silly. I should clear this up right now: it absolutely is stupid and silly. It breaks long-accepted rules. First of all, the blatant unbalance of the characters is ridiculous. Secondly, the die roll is almost totally unmitigated. There aren’t a bunch of ways to affect your fate, and once you know the value of different characters, the draft isn’t hard to predict.

If it isn’t obvious already, this is not a game you play for its cerebral content. It’s what might euphemistically be called an “experience game.” It shares this quality with the likes of Dungeonquest, Talisman, and Tales of the Arabian Nights. They are all games where decisions are like the setup to a joke, and the result is the punchline. Magical Athlete isn’t nearly as narrative as any of those games, but it does produce some hilarious moments where you can almost hear the rimshot. The interactions and the insanity recall another classic, the king of bizarre interactions, Cosmic Encounter. In fact, Cosmic Encounter is probably the most obvious inspiration beyond simple roll-and-move race games that children learn.

But buried beneath all of that is some subtly smart design. First and foremost, there aren’t many characters that slow down the game. Sure, you might have to lose a turn or switch places with someone, but these typically affect just one player at a time. If someone is pulled back, it just makes it easier for someone else to win. Secondly, for all of its chaos it’s a very uncluttered design. I’m sure it would have been tempting to include things like terrain, power-ups, and event cards to the game. Those might have worked in some forms, but Magical Athlete is better as a lean design. And in spite of the variety of characters, it manages to find a weird balance. There are some ways to incapacitate those strong characters, such as by using the Assassin, who can remove someone from the game and replace them with an unused character. And even if no counter presents itself, any single character is only good for one race and will have to contend with the die just like everyone else, even if it’s just through the rolls of other players.

This pacing and focus is what keeps Magical Athlete coming to game night when longer games have to stay home. It’s ridiculously easy to learn, and the pacing is such that it sweeps up people who wouldn’t otherwise be interested in such a game. It’s quick enough that it doesn’t require a big commitment, and it’s raucous enough that even the most cerebral gamer will probably enjoy it in spite of himself. While it still does depend on the player buying what it’s selling, the speed and simplicity does some heavy lifting in drawing people into the game. As a result it has a higher success rate for me than many other “stupid” games.

I should also mention the terrible production. Wait, did I say terrible? I meant perfect. I mean, sure it’s chintzy. The draft board has a plain blue background, and the track is just a blank grid of spaces over poorly-rendered grass and dirt. The only thing that keeps it from looking like a print-and-play game is the mounted board and the bizarre chibi artwork, which supplies a lot of charm. There’s also the little bases for the character stand-ups, which are almost totally useless. But it actually dictates a lot of the atmosphere of the game and gives it a personality that I like a lot. Put it this way, if someone were to Kickstart a new version of the game with updated artwork I would be very disappointed because I’m pretty attached to how it looks now.

Analyzing Magical Athlete is a little like trying to explain why a joke is funny. I don’t mean to overthink it, but I bought the game on a whim for a lean $25. I didn’t expect it to stay in rotation for several years, but that’s exactly what it did. Even people whom I never expected to enjoy it are open to a game every now and then. And you know what? I think if someone flat out refused to play, I wouldn’t trust their taste in games very much.