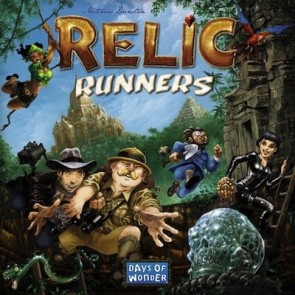 Relic Runners is a game that dwells in the shadowy realm of the okay. It has absorbed too many lessons from modern game design to be anything close to bad. It’s a surprisingly thoughtful design, one that has gotten a little bit better with every play. Still, I’ve yet to play it with anyone who was wowed by it. The response when we finish a game is almost always “not bad,” or “alright.” It’s too competent to be ignored, but too bland to make much of an impression.

This is the newest release from Days of Wonder, and it goes to the well-pumped well of Indiana Jones-style action archeology. You are an explorer who travels around the jungle exploring temples and ruins. You can only move one space at a time, but as the game goes on you’ll be able to put little markers on familiar trails. These will allow you to move long distances at once and get around faster. The temples all come in little stacked tiles, each of which gives you a little reward for exploring them, like special powers or victory points. When a temple or ruin is completely excavated a relic appears. If you start and end a move on two relics of the same type you get the one you landed on, along with some victory points for your trouble. There’s also a chart that gives some special abilities you can use. These work by passing little toolbox tokens on the board, which allow you to advance your markers on the chart to take advantage of stronger abilities. Once enough relics have been discovered, the game is over and the highest score wins.

One of the more curious qualities of this game is that it always seems to start slow. I’ve found it difficult to figure out what I should be doing in the first half of the game. Even knowing the relative value of different types of temples, a lot depends on what the other players want to do. You might end up with a network that leads somewhere no on else wants to go, which means those temples won’t get excavated as quickly. But if it starts slow, it suddenly gels in the second half. Once the board has become a little more set and players have collected a couple of temple tiles, it becomes more obvious what you should be doing. I’m not sure if this is a good quality or a bad one, or either. In theory at least I like how the board state feels so fluid until the second half of the game. There’s a fun little realization that you get when it starts to come together. On the other hand, the front end of the game feels altogether too slow for me. It’s like you need to dig through the drab part to get to what’s worth playing.

There’s a very good chance that this dual nature is a result of me not being very good at the game. The first half of the game may be slow, but you’re actually setting up a lot of your network and figuring out where things go. A smarter player than I will enjoy the opportunity to do all this planning. There will also be a lot of players who are able to combine special powers and their routes into some cool combos, which isn’t something I’m naturally very good at. The strategic aspect of the game has actually become a little more pronounced with every game. No doubt this was partially due to playing with more players, since you are competing with more people for relics and VP. Not surprisingly, that bumps up the pace of the game as well.

Don’t misread me, this isn’t some intense battle of wits. It’s still aimed squarely at the casual market, as is the case with most Days of Wonder titles. They actually seem worried that the design isn’t quite as easy to learn as they need it to be. There are a lot of recommendations on how to play in your first game and a couple of special  powers for the players that are considered “advanced” options. These must be there for when you teach grandma, because trust me when I say that any halfway experienced gamer will have no problem digesting these rules. Still, they’ve done a great job of making all little rules obvious in the game production. The player aids are all very clear and well-illustrated. For that  matter, this might be one of Days of Wonder’s best productions ever. The three-layered temples look very cool on the board, and the relics themselves are now in the running for my favorite game components of the year.

So Relic Runners is a solid casual game. Then why don’t I feel compelled to play it more? That casual nature is one issue, or more specifically the kind of “casual” it goes for. It aims for the kind of strategic satisfaction where you get to put together a plan and execute it, rather than something that embraces interaction. That’s one way to do a casual game, but it’s not a very interesting one to me, and anyway several games have done it better. Days of Wonder have already made the ultimate crossover title with Ticket to Ride, and nothing here is that evident or intuitive. And in a post-King of Tokyo world, I don’t think it’s unreasonable to expect an adventure-themed family game to get the blood pumping a little. Relic Runners may know what to do with strategy, but it’s too mannered and studied, especially when compared to similarly-themed games like Tobago and Escape.

There’s stuff there I like, of course. The stuff I’m not wild about will probably find an audience too. The truth is that if I were at a game night  and someone suggested it, I wouldn’t raise any serious objections. But neither would I suggest it, because if I couldn’t find something better to play I would be at the wrong game night. Days of Wonder releases games so rarely that their titles all come with some minor fanfare. This is one that avoids their biggest missteps, like Mystery Express or the intriguing-but-fragile Mystery of the Abbey. But neither does it attain the excellence of Small World or Memoir ’44. In a world where only the best games stick around, Relic Runners lands right in the middle of “above average”.