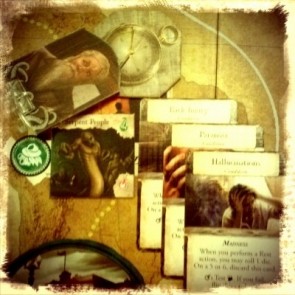 And that’s how we found him, two vertebrae shattered, paranoid, and hallucinating about snake-people.

In case it matters, I am a solid Arkham Horror fan. I own all the expansions, played in both summer leagues with 6 other friends, and have attended 3 of the Arkham Nights. I dig this game. So I too was naturally excited to see FFG release a new game in the Arkham Files collection. As excitement built, the description of this game shifted more times than a shoggoth worker. It was a revamp, a remake, a streamlined version, a shorter version (but not like Elder Sign). It was the answer to all the problems Arkham Horror’s fans and failed converts voiced. But as this new being has now made itself known, its true nature is a bit different from the descriptions that preceded it arrival. Here’s what I think Eldritch Horror has gotten right:

Player rounds are more streamlined and turns more straight forward: In Arkham you have 5 phases (Upkeep, Movement, Arkham Encounters, Other World Encounters, Mythos Phase) that have now been compressed into three: Action, Encounter, and Mythos. Wisely, Combat has been moved into the Encounter phase as has any encounters involving gates/other worlds. Combat in Arkham was always a disrupting affair. It occurred (oddly) during the Movement phase could stall the turn flow if a player was stuck on a particularly difficult monster. Sure you could skip ahead, but that risked creating confusion especially with new players. Also since the presence or absence of a monster could affect the rest of the players decisions its important to first know the outcome of combat.This is no longer a problem, players can come and go in the presence of monsters but can not access encounter until they are defeated. And while we are on the subject of the Action Phase...

The Action Phase consolidates all “boring” non-encounter actions into one place: In Arkham Horror there comes a point where one or more characters have to break away from the task of closing gates and either gain more items, heal sanity/stamina, or both. The problem for me is these tasks slow the game down. Gaining these items/healing is uninteresting because you just arrive at the General Store, Hopital, Curiosity Shoppe, ect., forgo a themed-encounter, and simply just pay for what you need. Boring. Dull. Time consuming. And its possible to be kept on the sidelines after taken these actions when a monster wondering in your way, making your stay at the hospital much longer.Eldritch Horror removes all of these frustrations by allowing item attainment, healing, and movement acceleration to be performed at the start of the player’s turn. It doesn’t disrupt from player strategy and it doesn’t force a player to give up a meaningful encounter for clues, gates, or monster combat. Also of note, I love that money is abstracted to the Influence skill. Once again several different mechanisms (and extraneous bits) of Arkham, money, allies, the Deputy job, is compressed into one “thing”. Efficiency that doesn’t detract from flavor or theme.

Theme in Eldritch Horror is tied directly to action/consequence not location: One complaint is that Eldritch Horror does not have enough theme. I don’t think this is correct at all. Arkham Horror tied a vast majority of its theme directly to the town (board) itself, however there was little difference in which GOO you fought against. And it was a rare encounter that linked clue attainment with the encounter experienced by the player. In other words, a lot of description was given about the Witch House, but not any firm connections about how it plays into the summoning of Hastur or how any clues there relate to Hastur (unless you are playing an expansion- even then its scatter shot). Eldritch Horror takes the opposite approach, while many locations may be slightly generic, the act of gaining a clue, solving a mystery, closing a gate, going on a expedition, or improving a skill has a lot of specific theme tied to it. Finally, unique items are given a proper theme and due by being location that makes sense like in an Egyptian tomb or Stygian swamp instead of laying around in some shoppe.

Eldritch Horror also incorporates theme into the consequences of player actions. Failure in encounters results in specific ailments (which was one of the better aspects of the Dunwich Expansion). For instance casting a spell is no longer just a failed check, but instead risks the caster’s mind as it was always described in HPL’s works. Detainment/delay have more thematic “meat” to them than simply laying your player token on its side or losing your stuff. In Arkham Horror bank loans, maddness/injury, corruption, and dark pacts could all be easily avoid or often were not worth the trouble. Which was a shame because they did add a lot of story to each play experience- which is why personal stories/relationships were such a hit. Eldritch Horror avoids having these cards collect dust by weaving them into gameplay at all levels; you will mostly likely suffer an injury, gain debt, and/or risk your character’s sanity at least 2 or 3 times during gameplay (as it should be).

The roving monster parade has been replaced by better monster “ecology” further advancing theme: One of Arkham Horror’s main marks was monster movement. At times it can seem if those horrors really are hunting you down, but other times it seems as if they are just moving in a big circle around town. A recent complaint is that Eldritch Horror’s monster do little if anything at all. I find this surprising because Eldritch Horror does a better job tying monsters to thematic locations and actions. For instance, mummies and snake people are moved to the Pyramids and Amazon respectively. A single zombie, if left unmolested, will eventually generate the epic monster Zombie Hoard which will eat allies and advance the doom track. If its a chase you want, Nightgaunts and Hounds will follow you around the board. Meanwhile goat spawn will tempt you with dark pacts, witches and wraiths will curse you, and the esoteric experiments of the mi-go will make clues dry up on the board. And lets not forget epic monsters which allow you to encounter some of the avatars of the Great Old Ones. So how are these changes “inferior” to having monsters move? Eldritch Horror’s bad guys seem to have a better handle on their behavior as described in the many text that are background for this game. And they don’t have that confusing color system- red for go fast (not stop), yellow for stop (not caution/something different), and green for something different (but not fast?).

The Mythos is an ordered system tied to keeping the game moving instead of a random collection of events: Arkham’s Mythos deck is a great example of how a single deck could do a lot of work to provide a unique experience. Unfortunately, there was little way to control how any association of cards were drawn. Ideally the doom would steadily advance as new gates opened. However, due to statistics, a few well placed location seals will grind the end of the game to a meandering stroll. This was only remedied with the advent of gate bursts, a good solution, except a few in a row will undo a lot of hard earned progress. Eldritch Horror remedies this problem by dividing the Mythos deck into 3 different constructed stages that are placed together for a complete deck. Each stage is composed of 3 different types of cards (green, yellow, blue). As an added bonus each color of card has 3 different difficulty levels: easy, normal, and hard. Allowing game difficulty to adjusted to taste. Each of these colors has a different purpose. Blue card are Rumors which provide mini-crisis for the players to solve in order to stave off premature ends, green cards provide clue tokens and monster surges, and yellow cards provide Reckoning and Gate openings. All green and yellow cards move the omen track forward one, which triggers a decrease in the doom track depending on what Gate symbols are in play. This can result the doom moving 0-3 space in a Mythos phase. The net result of this stacking is a more even generation of clue tokens, Rumors, and monster surges. Instead the haphazard nature of Arkham where it was possible to get Rumors late game, monsters surges when it didn’t matter, and clue token on location with gates (which prevents them from being placed). Additionally if the Mythos deck ever runs out the players lose the game.

The end result is Eldritch is neither a remake or a revamp, but I think a game that stands on its own. Eldritch Horror design has clearly learned a lot from all previous Arkham Files games and also is hard wired with a lot of interesting control points for expansion input. You have the Omen Track, Research Deck, GOO Special Even Deck, a constructed Mythos deck, and a Gate Deck that could be substituted for anything. You have a game that is geared toward making sure the each player is active in their turn and not spending a majority of it performing accounting procedures or making non-productive moves. Eldritch Horror is not a game you need to own if you are happy with Arkham. But if your Arkham copy is not getting enough table time or you need a good introduction to new players, then Eldritch Horror is the way to go. It will also make a perfect gift for the Arkham Horror fan in your game group or family.