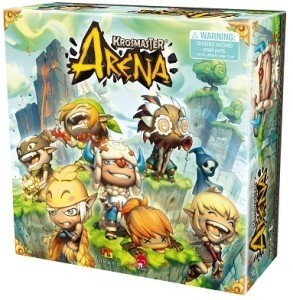 With my daughter less than a year away from moving out of my house, I find myself casting about for any way to connect with her. She’s not game for all the stuff we used to do, like hanging her upside down and banging her head on the floor. For one thing, she’s too heavy for that now, and I’m not nearly as fit as I was when she was six. She doesn’t even want to play games with me any more, because she’s got her own friends who come over for that (they meet twice a month to play D&D. Last time, one of her friends got kidnapped, and my daughter made the girl hide in her closet while the rest of the team planned her rescue).

But when I showed her Krosmaster Arena, she was practically begging to play with me. The figures are probably the biggest draw, because they’re heavy plastic toys with huge chibi heads. They are stupid cute, which was why my daughter loved them. When she discovered that the Queen of the Tofus summons little chickens whose main attack is ‘kiss,’ she decreed that this was the cutest game ever made. She is prone to hyperbole.

To be honest, I was not confident that Krosmaster Arena was going to have much going for it beyond the obvious appeal of adorable mutant-headed miniatures. It’s got sky-high production value, a pleasant selection of figures, and great three-dimensional terrain pieces (which are cut out of cardboard and then assembled). The art is spectacular. In short, it looks pretty – but it has almost too much style to have any substance.

WRONG!! Holy mackerel, this game is fun. When you get past the king wearing a sheep on his head or the fairy with the little pink wings, you’ve actually got a really clever game on your hands. The figures might be cute, but the violence is delightful. You’ll throw bombs, shoot arrows, command sheep and fall back on the old-reliable Blow To The Head. You’ll stand on crates to get a little more range, dodge around to avoid getting entangled with the heavy hitters, and send your bird-like minions to control the board.

Krosmaster Arena is not just a pretty game. It’s got surprising strategic depth. The object of the game is to be the last one holding Golden Gallons, which you can buy with the tokens you pick up all over the board, or steal by simply whacking your opponent’s fighters.

(You may be wondering why they’re called ‘Golden Gallons.’ The reason is simple – the game is Japanese, and Japan is weird.)

To add more brilliance, every figure does something different. The strange witch-doctor guy has a super-powerful attack that is actually fairly easy to avoid, unless the other crazy figures on his team are grouping up to make sure you can’t get away. You might manage to balance out that pain by using your healer (her name is Lil Healey, because what else would it be) to keep your people in tip-top shape while they race around picking up money. You might leave Will Tell on top of a wooden crate so he can fire at everything on the board and use Anna Tommy to rush the middle of the board and pick up the cash, because she can take a hit.

This just keeps getting better, too. On top of buying those ridiculously named Golden Gallons, you can also buy little boons from the demons. You can be mid-game and suddenly be equipped with ice dofus armor (yeah, I spelled that right). You might acquire a happy little monkey who helps you throw things, like his poop (hopefully he will throw the poop himself, and not ask you to help). You could throw a lightning bolt, fire deadly darts, or wear an outfit made of dead chickens. All of these things are great – but you buy them with the same currency you would use to get those Golden Gallons from your opponent. So you have to decide how to spend those coins, and it’s actually a pretty tough choice.

There is a bit of a problem, though – Krosmaster Arena comes with just eight fighters, and you get four on each team. That means you’re not going to see much variety. To save you from the sadness of having to play the same teams over and over, the designers of the game have created a whole damned bunch of that most sacred cow of board games – expansions. I think there are ten, and they were all released at the same time as the base game. Each expansion comes with four new miniatures. To complete the set, all you will need is something like 350 dollars. That’s assuming US dollars – you would need about 47,000 in Canada.

My daughter loved Krosmaster Arena. This is something of a mixed blessing – on the one hand, I am ecstatic to have found a game she wants to play with me, and that both of us heartily enjoy. On the other hand, she insists that I must buy all the expansions. Even at discounted prices, that’s still going to set me back a couple hundred bucks. Plus she wants the PVC tokens, and the only place I’ve found those is on eBay – going for hundreds more.

Happily, my daughter is nearly 18, so she’s old enough to get a job. I can probably get away with buying just one or two expansions, and tell her to get off her ass and find some employment if she wants the rest. Krosmaster Arena is fun as hell, but the financial investment required to own everything will break me, especially since I’m already on the hook for a king’s ransom in Christmas presents. Until I win the lottery, however, I’ll still have something fun to do with my kid that does not involve child abuse, because right of the box, Krosmaster Arena is a surprisingly excellent game.

Cons:
Only eight fighters in the box, which limits replay
Lots of expansions means this could be a money sink