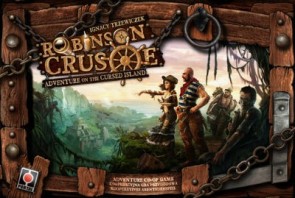 Mostly, I’m not a big fan of co-operative games. Games suffer terribly without the unpredictability and skill of human opposition, and the whole genre sometimes looks like a collection of semi-functional attempts to solve this big, blaring problem.

But there are a very few that make my grade. And I’ve noticed they tend to have certain things in common: they allow plenty of scope of individual player decision making in the face of the group, offer some sort of simple AI-like mechanics that make it look like the game is reacting to your decisions and have a deep well of variety to add to the narrative and keep things unpredictable.

But the most important quality of all is balancing the need for transparent mechanics that allow for strategic decisions with a strong wind of chance to make sure the game doesn’t become a mere logic puzzle. Lean too far in the former direction and you might as well be solving co-operative Su-doku with your friends. Too far in the latter and you might as well co-operatively shoot craps. It’s a hard, hard proportion to get right and none of the co-ops I’ve played so far, even my favourites, have quite got it right. Until I played Robinson Crusoe.

Robinson Crusoe doesn’t so much nail that balance as drive it through the wall and into a water main. At heart it’s a worker placement game, albeit one with an unusually strong emergent theme for the genre, with all the heavy decision making that implies. Your picks from the bamboozling plethora of options you’re offered every turn will shape the game and nearly always determine your success or failure. Yet skimming across the top of these hard choices is a playful breeze of chance that can, if allowed, turn itself into a hurricane of destruction.

Each player has a specific character with a raft of special abilities and two placement pawns which, each turn, can be assigned to activities like exploration, hunting or gathering resources. Some activities require only a single pawn, others can have one, two or sometimes more and this affects the success rate. Shove enough pawns into the activity and you’re guaranteed success. Fall short and you’ll end up dicing for it, possibly failing or triggering a linked – and usually undesirable – event.

It’s a quite wonderful mechanic. At a stroke, it puts the amount of chaos the players are prepared to endure into their own hands while at the same time offering a series of meaty and difficult decision every round while also enriching the narrative. It also has an unexpected knock-on effect when it comes to group decision making: if there is disagreement, players can still get what they want done if they’re prepared to take a chance.

This injects some inter-player tension that might recur later in the game, and reduces the boss player problem that plagues co-ops as a genre. So does the imponderable random factors that dance around your decisions. These factors do not, however, eliminate the problem, and the possibility of an alpha-dog player arising to direct the game for the other participants remains a black mark against the title for me..

The whole thing is smug with other neat little rules flourishes, interlocking to provide a quirky, absorbing experience. Another favourite is the way events can come back to haunt the players. If, while exploring, you draw a card that tells you you’ve sustained a head injury, you take damage, mark your character’s head with a wound token and shuffle the card back into the main event deck. Draw it again and you suffer recurring headaches causing more problems.

The weight comes from a classic set-up of too much to do in too little time. Characters need food to survive from the off, but they’ll need other things too as the game progresses. Shelter from the weather, tools and inventions to make life easier. To do most of these, and to work toward victory, you’ll need to spend time gathering resources first. You can’t do it all, sacrifices will have to be made and characters will suffer through a simple but effective rule stating that any shortfall in resource requirements must be paid in wounds. If anyone accumulates enough to die, it’s game over.

Winning is hard, and requires practice and skill, but is far impossible. The difficulty level, again, feels just about pitch perfect. Every game feels like a fresh take at a puzzle, but one in which the parameters change subtly, demanding fresh insight, granting a new narrative and keeping things from getting dry and stale.

The inventive mechanics tie up into a game that gives you not only a satisfying balance between strategy and chaos, but which tells a detailed narrative. You’ll pick a scenario at the start of each game, ranging from a standard rescue from a desert island to a bizarre quasi-horror quest to burn out cannibal villages on the isle. There are six in total, widely varied and each playing significantly differently from the others in a rules-light way by tying in different effects to icons on cards, tiles and chits.

But there are also five fat decks of cards, the main event deck, three lots of events for different activities and the wonderful mystery deck, which ensure that no two games are remotely similar. In one, you might be constantly threatened by wild beasts running amok into and through the camp, another might be filled with vicious booby traps left by mysterious previous residents. There’s unseasonable weather to deal with, flotsam from the shipwreck to discover, fires, cliffs, earthquakes and much, much more.

Of course, you pay for it in complexity. You can’t get all that strategy, all that detail, all that variety on a simple rules framework. But it’s not so bad as it might first appear after a trawl through the dreadful rulebook. A lot of the heavy lifting is farmed out to cards, tiles and a seemingly endless parade of tiny icons and with few examples, it takes a while to see how it all locks together. And there’s a lot of wood and card to shuffle about during setup and every turn. But once you’ve got it, games run surprisingly quickly: the two hour play time on the box is not only plausible, but occasionally generous.

Humble pie is rarely tasty, but sometimes you just have to eat a slice. On the basis of rules and reviews I got the impression with was a cumbersome game that did little to solve the inherent problems of the genre, merely one that communicated a convincing theme. The theme is certainly there, the game remains constrained by the inherent problems of the genre and play can be fiddly to administrate. But the poor rulebook hid a wealth of clever mechanics and careful balances that make this one of the few quality co-operative games I’ve enjoyed.

May 03, 2019
Rating
4.0
Robinson Crusoe: Adventures on the Cursed Island
Walks a wonderful line between strategy and chaos, keeping the players in control but constantly needling them with unpredictability. Rich with variety and theme, but the co-op curse of boss player can still be a problem, especially with experienced groups.
MT
Matt Thrower #1 Reviewer 286 reviews