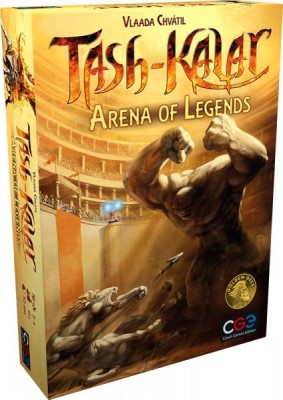 In The Magicians by Lev Grossman,the main character is sent to a magical boarding school where he is given a certain textbook. This textbook is filled with complicated hand gestures that must be performed precisely to produce their intended effect. The protagonist is made to practice these gestures over and over again, until they become ingrained in his memory and he can produce them all in a moment’s notice. In the process this textbook becomes the bane of his education, a tormentor that reminds him of how far he has to go as a magician. That’s a pretty accurate description of the process of learning Tash-Kalar, the  new game from Vlaada Chvatil. The only difference is that the payoff is getting good at a board game, instead of, you know, actual magic.

Tash-Kalar is a dueling game where each player is a summoner trained in the ancient art of (wait for it) Tash-Kalar. Players alternate placing individual tokens on the board, trying to form patterns that match a hand of cards. When they make one of those patterns, it creates a specific kind of unit that gives a one-time effect on the board and then turns into a token like all the rest. Those one time effects might allow you to move tokens around or remove tokens belonging to your opponent. There are also different ranks of units that can be created. The lowest level is used to summon the next one up, and those are required to summon legendary units, which can wreak havoc on the board formations. You’ll score victory points based on either which of your opponent’s tokens you destroyed, or how well you matched up to a series of missions.

I’ll tell you one thing, one of the biggest problems I’ve had with Tash-Kalar is the title. Not so much the word itself, but  more the fact that it gives zero indication of what in the world the game actually is. I honestly feel a little silly saying it, and I’m the guy who’s okay with that card in Cosmic Encounter that makes everyone say “Yes sir.” It’s just two meaningless words mashed together to make a meaningless theme to the game. It might as well have been called “Bucka-Bucka” or “Foodly-Dumdum” for as much sense as it makes. But more than an opportunity for me to write silly words, it’s symptomatic of the thematic difficulties the game experiences. Unlike other Chvatil games, Tash-Kalar functions mostly as an abstract. It’s a game about putting tokens on the board and matching them to various patterns. That’s not really a problem,  but the rules and the illustrations work very hard to sell the idea that you are learning some ancient magical art form. It’s like the game isn’t really comfortable in its own skin, and doesn’t trust the player to try to make these connections on their own. That’s probably because said connections aren’t very strong, but pointing them out only reinforces it.

Vlaada Chvatil has a reputation for putting together complicated designs that facilitate cool game experiences. I still think that Galaxy Trucker, Mage Knight, and Space Alert are brilliant games, and Through the Ages has its merits as well. Tash-Kalar has far fewer rules than any of those behemoths, but its simplicity masks a boggling game. It ends up having just about the same kind of learning curve, but doesn’t have a fun story or theme to fall back on to guide you through the early rough patches. When you begin to take on the full Tash-Kalar experience, it becomes obvious that it really needs some kind of hook to keep you coming back. The early going is harsh. Matching pieces on the board to patterns on your cards as well as patterns on the missions is complicated enough, but it’s even harder when your opponent is periodically removing your pieces with his own summons. It’s the sort of game where you simply cannot plan in between your turns, because the board changes so drastically every round. And it’s not exactly a simple decision to make when your turn arrives. It was enough to paralyze even me, and I am not one to ever labor over decisions in a game. There are variants to play with three or four players, but that sounds like a good way to court madness to me.

Let me be clear here: I do not think Tash-Kalar is a bad game. Chvatil is an experienced enough designer that he can now try something like this, which is off the beaten path even for him. My problem is that I’m not sure I could ever get to the point where I could really make a good judgement call on this game’s strategic possibilities. The front-end commitment is frankly too much for me to handle. Like that magical textbook, it feels like nothing so much as grueling training for some intense event. It doesn’t help that two-player duel games are a crowded design space in the first place, so it’s already competing with games that are just as deep but don’t feel like a football coach yelling at me to take another lap.

If you have the energy to commit to learning Tash-Kalar, then knock yourself out. For my part, it’s probably the first game I’ve played that is almost all learning curve. There’s obviously a game there, but it asks too much up front without giving you anything to go on that will keep you there. It might seem lazy that I wasn’t willing to power through that difficulty to dig into what’s inside, but I sat through a four-hour learning game of Mage Knight, which we learned as we read from the rulebook, and I wanted to play again right away. I’ve staggered my way blindly through games of Die Macher where I couldn’t explain what actually happened, and I still had a ball. When there are so many new games out there, it’s assumed we will have to learn them. Tash-Kalar’s problem is that it seems to think getting better is its own reward. It’s the board game equivalent of that obnoxious guy who is always telling you about how you should really get off the couch and train for a marathon. Good advice, but in the end it’s just a board game.