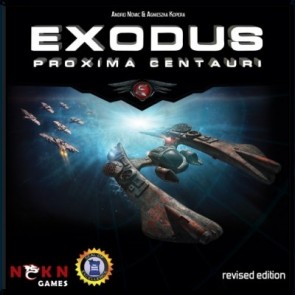 I’ve heard a lot of arguments equating well-designed games with fun games, yet I have no compunction about separating the two factors. I can think of plenty of examples of games that were well-designed and still not fun at all (I can’t stand Puerto Rico, for instance), but there aren’t many good examples of poorly designed games that were a blast to play. Which is why I was so glad to play Exodus Proxima Centauri, because now I have a good example.

Exodus Proxima Centauri is a space 4X game, but without exploration, so I guess that makes it a space 3X game, or maybe space 4X-1X, or just a big space game. It borrows heavily from Twilight Imperium and Eclipse, except that where both of those games (especially the latest version of TI) are tightly designed, Exodus is sloppy. There were parts that just should not have been in there, and more than one spot where the design actually made it harder to play the game. And yet if I had to choose between the three I just mentioned, I would probably play Exodus. I would just house-rule it and clean up the graphics.

You do get a box full of nice things with Exodus. The spaceships are cool plastic minis, and since you’re each playing a surviving faction of the human race, it’s pretty much OK that everyone has the same ships. The cardboard for the tokens is nice and sturdy, and the space hexes (a staple of the Space 4X[-x] genre) are attractive. The only quibble I had with the design is that you have a player board that tells you which ships are upgraded, but the drawings on the board don’t look like the ships, so it’s really easy to get confused and think your fighters have the enormous cannons instead of the battle cruisers. Come to think of it, that was a major complaint, not a quibble. A quibble suggests a moderate disagreement, a minor flaw, and these indecipherable boards cost us battles more than once, when we flew our under-equipped personnel carriers into battle thinking they were dreadnaughts, only to discover when we started rolling dice that we had attacked armored titans with planet-destroying firepower using a handful of grade-schoolers armed with flare guns.

Exodus plays well enough, and it’s not hard to see what you’re supposed to be doing. But here again, we ran into sloppy design. Mostly we were bogged down by the sheer overwhelming minutiae that served virtually no purpose. Take the hidden, simultaneous movement. It’s all accomplished by placing tiny chits face-down on your board, one or two or three for each ship, and then revealing all fifteen counters at the same time and then saying, ‘oh son of a bitch I didn’t want to move there!’ That happened once before we decided to go in reverse player order, and forget this tricky crap in favor of having a game we could actually finish before the babysitter called and told us that our children had graduated from college while we were playing.

There are several neat factors to Exodus that make it a fun game in spite of its flaws. There’s a political phase, where you each vote with your dollars and the highest bidder gets to be first player. With the original rules, this part was kind of pointless, but once we got rid of simultaneous movement, we had some hot bidding wars for the top spot. The game was simpler AND more interesting. Plus there’s a voting thing where you pass resolutions that make cannons cheaper, or make it easier to do more research, and even a bonus action decided by the first two players. This phase routinely affected the way the game played out, which made me appreciate it for its simple brilliance (you know, once we made it simple).

There’s also a thing where you find resident aliens and kill them (this is a little like the Minutemen in Arizona and Texas, except they’re only supposed to deport). You can get some decent rewards for pulling off these unprovoked attacks, and since I do prefer a game with some bloodshed, I loved that Exodus gave me multiple very good reasons to pick a fight. Heck, by the end, we were fighting each other just to see blood spilled. That’s a fun game, when you’re running around blasting holes in stuff for no reason but to see somebody get blown up.

In fact, if I compare Exodus Proxima Centauri to Eclipse or Twilight Imperium, I find a lot to love. I prefer the tech trees, for instance, and the fights were faster and more bloody. The economics worked better than I expected, given the unreasonably complex trading sequence, and while we did take three hours to play, we mostly understood the game better than we would have with the other two. If we play it again, it will go even faster, though I expect to see more competition now that everybody understands how cool it is to get those gigantic blasters for free.

However, just because I liked Exodus more than its competition, I still can’t say it was well-designed. The level of unnecessary complication was nearly unforgivable, and the artist who made those spaceship board should be ashamed of himself (or herself, I’m an equal-opportunity offender). One of our players wound up thoroughly disgusted with the hot mess and didn’t have fun at all. If you do decide to give Exodus Proxima Centauri a spin, you might try the short game to start, and cull anything that looks overly complex. For sure get rid of that hidden movement thing. That’s a disaster waiting to happen.

One last tangential thing. Why do all these games have to take place in space? Why is that a prerequisite? Why not have a fantasy version, where the tech tree is replaced with spells and your various soldiers are actually elementals and dragons? Or a post-apocalyptic thing where you’re upgrading your dune buggies and training troops to kill zombies. That would be BAD ASS. I would buy that. Someone make that.

Pros:
Cool parts and plastic spaceships
Inter-system missiles that can blow up whole planets
Some actual improvements over other 4X games

Cons:
Overly complex
Some very poor art choices
Would it be so hard to put debris fields on the back of the hexes after a planet gets destroyed?