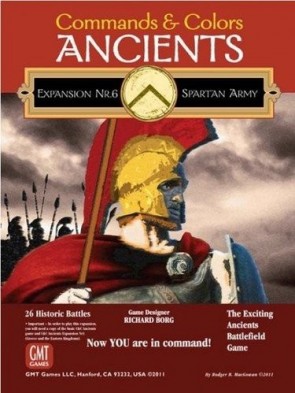 Game Name
Publisher
GMT Games
There Will Be Games

When you're ankle-deep in streamlined, strategic board games from the European school of worthy but tedious game design, it's easy to forget sometimes that part of what makes gaming great is the feeling of being there. C&C:A might be a bunch of cards and wooden blocks, but when it works you're not sat at a 20th century table any more: you're Scipio on the dusty plain at Zama, Hannibal on the gore-soaked field of Cannae.

I forgot this whenever I used to talk about the C&C:A expansions. Spoiled by the mechanical contrivances added to their respecting games by the expansion boxes for Memoir 44 and C&C:N, I played them and airily dismissed them as not adding sufficient extra strategy or interest to the game in comparison.

It's an assessment I stand by, in some respects. Given that almost every other expansion to almost every other C&C game has added sets of units which behave in some significantly different way to their base-game counterparts, the piecemeal extras in C&C:A seem a missed opportunity.

But what I'd been doing was playing from a position of ignorance. When I originally played these games, I knew very little about ancient warfare. Enough to appreciate that C&C:A does a fine job of replicating what little we know about the tactics and strategy of the era off some relatively simple rules. But not much at all about the battles themselves.

Then I went away and atoned for my ignorance by reading a book called Warfare in the Classical World by John Warry. And I remembered. I remembered how incredible it was that puny Greece had twice defeated the might of the Perian empire. I remembered how astonishing the tactical genius of Alexander was. I remembered how these battles, these generals, did so much to shape the modern world.

And suddenly, I wanted to play the Greek expansions for C&C:A again.

So here we are, many games later, having re-assessed some of the more intriguing battles with a little more knowledge of history. It makes all the difference. While I still find the added units and scenarios a little weak from a mechanical point of view, an understanding of the history made the games come to life as never before. Quite suddenly, I saw where the value was in these expansions: a straightforward way to game some fascinating battles with a great system.

In most respects, the recently re-issued expansion #1 is the better of the two. It spans a greater depth of history, from the Greek and Persian wars to the ascent of Rome and most of the scenarios are well worth playing, making it of interest and value to almost anyone with a passing interest in pre-Roman history.

On paper, you'd probably find the history contained in expansion #6, the Spartan Army, to be the more engaging of the two. I certainly did, at least. This is where you'll find famous encounters like Platea, and the legendary last stand of Leonidas at Thermopylae. Whatever merits the 300 board game might boast, it's nothing compared with slapping down the cards, rolling the icon-embossed dice and shouting "SPARTAAAA!!!" in the two Thermopylae scenarios included.

But while the big battles are well worth playing, all of the scenarios focus very heavily on infantry. You'd kind of expect that, from what we know of the Peloponnesian Wars and the other military encounters between the early Greek city states, but in game terms it starts to feel a little one-dimensional.

The game tries to improve things with a new unit type, the Hoplite, but they're really just standard medium infantry that can also utilise mounted command cards, a choice forced on the designer by a lack of cavalry in many of the scenarios. It works up to a point, but things do get a little repetitive after a while.

But I still reckon it's worth it. Just for "SPARTAAA!!!"

One of the great joys of these expansions for me was simply the variety of history they cover, drawing in battles I'd read about but which were virtually un-gameable outside of miniatures rules. The fact they were using the excellent C&C:A system was just a bonus. Fans of the game who just want extra scenarios might want to wait for the other upcoming expansion reprints, or download some from the web. But if you just want to re-live the glories of ancient Greece, there are few better all-in-one packages than these.