Cat Sack Fever - Felix: The Cat In The Sack Review 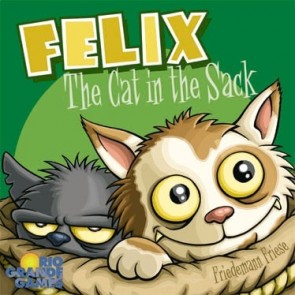 When I write about older games I try to find one that a lot of people have played, or maybe one that could be considered a classic. By that standard, Felix: The Cat In The Sack seems awfully slight. It’s a little 30-minute trifle by Friedemann Friese, who is much better known for his bigger designs like Power Grid. It was well-regarded when it came out several years ago, but like a lot of minor hits from that time period it’s been passed by in an age of deckbuilders and crowdfunding. Still it’s proven to be something of a gem in my collection, a short auction game that felt unique at the time and still does. And more than most games, it makes me laugh.

Each player has an identical set of ten cards, one of which is randomly removed at the beginning of the game. Each player submits a card that will be part of the lot up for auction. These cards range from adorable kitties that are worth a lot of points to flea-ridden cats worth negative points. The catch is that players don’t know everything they are bidding on. The cards stay face-down except for the first one. The bid goes around the table until only player is left. As players drop out a new card is revealed, and they also get a small bit of money for passing. That amount goes up the longer you stay in, and the more people that drop out the more is known about the lot up for bid. The last player in gets all the cards in the lot and starts the next auction. There are some other cards too, including a rabbit who is worth nothing, and dogs who chase away different kinds of cats.

Mechanically, Felix allows for some fun mind-games. If the first card up is a lousy one, it’s tempting to bail right away. But what if someone stays in for no apparent reason? Do they know something about a card coming up that will make the lot more valuable? Or are they just bluffing to give someone else enough rope to hang themselves? I’m generally of the opinion that in an auction game you should never bid on something unless you really want it, but Felix makes me break that rule constantly. It’s actually more of a bluffing game than an auction game, because it’s really about broadcasting the information you have and acting like you know something when you don’t.

In such an environment it’s tough to be the first player, since you only have knowledge about the first face-up card and nothing else. That’s literally half of what the other players know, and it creates situations where you’re left to pick up the check. If the next player drops out right away and reveals a terrible card, it often starts a cascade of players passing and revealing more terrible cards. Before you know it you’re stuck with a pile of negative points that you didn’t really know you were buying. In every game there is at least one or two auctions like this, where someone gets a terrible pile of cards without meaning to. It’s usually just bad luck too, not really poor play. This little bit of low-stakes Russian roulette might be the opposite of fun for some people. Felix has ended up  being a somewhat polarizing game among my friends for this very reason.

But the truth is that these moments are what makes the game so great. It’s like the setup to a joke, and followed by a perfectly timed punchline. I once played with a 10-year-old who bid me way up, and then revealed a terrible card when he finally dropped out. Just this weekend I played a game where I knew that I had put a terrible card in the lot, but I stayed in anyway to see if I could score a better payout for passing. As soon as I placed my bid everyone in the group passed in succession, and every new card revealed was another negative one. But then there was that one positive cat, so it wouldn’t be so bad, right? And then the last card revealed a big dog, which chased away the only good cat. It’s moments like this that elevate Felix beyond just another half hour auction game.

The truth is, everyone knows the risk going in. The term “cat in the sack” is based on a German phrase that translates roughly to “a pig in a poke”. You’re bidding on something that might end up being terrible, and everyone understands that going in. It makes for a surprisingly dramatic game, when you consider it’s only a half-hour card game with cute cat pictures. You got a good buy this time, but in the next round you might end up having to pay for a bunch of mangy fleabags, and the reversal can hit you with a realization that is hilarious in its tragedy. It might not be a game that will ever be on the hobby’s radar again, but in a world where Coup and Love Letter have become hits, maybe Felix deserves to be one as well.