Of Xia and Brimstone 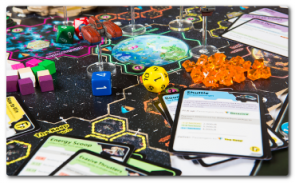 Xia: Legends of a Drift System is a game that I kind of enjoyed upon my first play but definitely didn’t love.  The inherent chaos and randomness was irksome and the length combined with the opportunity for prolific downtime detracted from the space-faring hearty adventure at its core.  The central mechanisms and overall experience definitely spoke to me and grasped that elusive quality of adventure that isn’t featured too often nowadays but it was buried under a husk that was keeping me from finding the juicy nectar.

What really surprised me was that everyone around me loved it.  I expected it to be a rather strong love/hate type game due to its decisive and uncompromising nature but all I could find was love.  This wasn’t jiving with my own feelings due to the fact that I was overly guarded, heeding some of the negative feedback I’d encountered online, and didn’t experience it with an underlying sense of enthusiasm and optimism that I’m used to exploring new games with.  It was strange as parts of my brain resisted the elements that I typically find fun and shifted my perspective into unfamiliar territory.

I stuck with Xia because ultimately it had enough character and personality that I wanted to see the show again.  This would ultimately be one of the best decisions I’ve ever made as the game has continued to grow on me and blossom into a title that won’t be leaving my shelf.  I still see Xia’s faults and there were still design decisions made that I wouldn’t have endorsed, but it tells a story in its own way and in a way that elicits shouts of triumph and winces of pain.  Sign me up.

My full review is here.

Shadows of Brimstone is a game that I forced myself to back away from when it launched on Kickstarter.  It hit several sweet spots that instantly drew me in – epic campaign dungeon crawl, perfect setting, and attractive miniatures.  At the time I had Myth, a game I’ve greatly enjoyed despite the overwhelming negativity, and I knew I didn’t need another lifestyle game.

Then GenCon happened and I was able to demo the swollen bastard first hand.  I knew I had to do what I could to piggy-back onto another backer’s pledge as I needed to have this game on my shelf.  A hook-up was made and the two enormous core sets would arrive in November and the pain would set in.

I’m a miniatures guy.  I’ve played in numerous systems, painted a healthy number of ‘em, and assembled many more.  Shadows of Brimstone’s minis just are plain awful.  Even with cleaning and filing there are large gaps and pieces don’t quite fit together correctly.  It took me several hours of assembly and cleaning and I’m still not overly happy with the outcome.  It’s the type of production decision that has you slapping your forehead and wondering what happened behind closed doors.  Not only do you have a game that casual gamers can’t even put together, but one that experienced modelers need to spend hours working on just to get them looking as good as Myth or Descent’s quality pieces.

I pushed past the frustration and disappointment and my group hit the mines, hard.  We’ve played a number of sessions and overall, the experience has been enjoyable and this certainly lives up to its billing as a spiritual successor to Warhammer Quest.  The only problem is that the game is a spiritual successor to Warhammer Quest.  The vast majority of the game – mindless die rolling and mindless enemy AI – is nothing special or altogether engaging.  The game lives and dies on its item acquisition and between adventure trips to Town.  At its center is an MMO-like grind to get that crazy-ass darkstone-gripped hieroglyphic engraved six-shooter that lets you kill 10 enemies instead of 6 on your turn.  It’s a slaughter-house race where the butchers are running through the pen trying to hack down pigs before their neighbor takes the king’s portion.

The idea to reward XP individually based on kills is a very poor one.  You have encounters where a player kills nearly everything that’s spawned and sometimes this is achievable repeatedly, causing a widening gap of non-existent parity.  At least soon enough you’ll be in town and can buy some new cigarillos and ten-gallon hats.

The levelling up system itself is fantastic with branching skill trees and many options that is until you realize there are certainly optimal choices at this point.  The “at this point” in the previous sentence is key as the designer, Jason Hill, has stated many of the benefits of certain options will become more evident once additional content is released (that you will of course need to pay good money for).  It’s maddening and gives the impression Shadows is nothing more than a J.J. Abrams and Damon Lindelof grand idea with holes the size of the Grand Canyon at its surface.  At some point I can see myself flipping the table and telling Jack we’re not going back to the goddamn island.

Critically this game is a bit of a mess, but I cannot deny we’ve had fun.  I’m also not looking to open up the shelf space at this time.  Despite the sometimes over-bearing monotony the game does move pretty fast at a 3 or 4 player count and the rewards do come swift enough to keep the grind alive.  It just pains me to question why no one can cram a fantastic game into an equally fantastic campaign framework.  Game after game hits upon this concept and no one can connect with enough wood to knock it out of the park.