Sheriff Of Nottingham Board Game Review 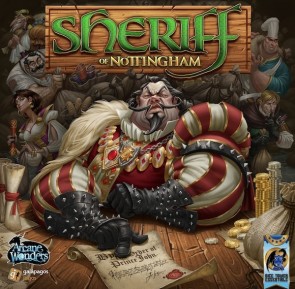 A face to face look at 2014's biggest bluffing game.

One of my many cousins is substantially younger than myself and she's always been shifty, energetic, and unpredictable; she's the wild card. We have gone to battle countless times in restaurants, living rooms, and in a myriad of vehicles - without mercy she has always beaten me down and grinded my fragile soul into motes of dust. I've lost sleep wondering if I'm simply not fit for staring contest combat duty or if she has some unnerving power that provokes my inevitable blinking. So when Sheriff of Nottingham was released and I had the opportunity to knee-cap her and dropkick her in the head with this 1 hour conquest of embattled wits, I stood on the table and flexed like Arnold.

Sheriff of Nottingham, a re-implementation of the German Hart an der Grenze, is an extended staring contest where you will bluff, mislead, and bait your foe into blinking. It's direct, face to face mental sparring where you need a serpent's tongue and a thousand yard stare Josey Wales would be jealous of. It's social, simple to grasp, and above all enormously fun.

The theme of this title is actually pretty solid for a social game of this type. Players take turns donning the role of the Sheriff, while the rest of the table attempts to load up goods in their wagon and make it through the heel's checkpoint without any ill consequences. Goods are derived from a hand of cards that include legal items such as cheese, apples, chicken and bread. The deck also boasts a substantial amount of illicit goods like crossbows and mead that are deemed illegal. You place a number of cards from your hand into your slick cloth bag and then hand it over to the Sheriff, telling him how many and what type of good is inside. You cannot lie about the number of cards inside, but you can (and probably should) lie about what type of good is within. You're only allowed to say one type of good so to play it straight and head for a low sum game you put in 3 Apples and call it a day. If you throw in an illegal crossbow or even a different type of legal good such as Bread, you're walking the razor's edge and risking a beat down.

The Sheriff player must either decide to open your cloth bag or leave it closed, handing it back to you. If he opens it you will either have to pay him a sum of money based on the goods you attempted to smuggle, or he will have to cough up money to if you made your momma proud and told the truth. The goal is to amass goods as they are worth money at the end of the game and you lose all of your goods in a wagon load if you are caught lying. Scoring and strategy packs a bit of depth due to bonuses gained from having the most or second most of one type of good so you are pushed into a passive aggressive struggle of trying to sneak more cheese wedges across the border than Jimmy who keeps flashing you crazy eyes and taunting you for losing that massive haul of 5 swiss and 1 cherry mead.

Stripping out the setting and mechanical flair this game resides in a similar realm to the social deduction hit Coup. You either stick to what Jack Nicholson thinks you can't handle or you liberally bluff and you strategically try to maneuver yourself into a position to claim the high ground by the end. However, the game takes this malleable and unrestrained social joust and places regulation so that you are forced into making direct contact with your enemy (the Sheriff) by handing him over your bag of goods and you are required to look him in the eye when you make your claim. That sounds like a subtle change but it's actually quite enormous as the game funnels you into these areas of conflict and negotiation so that you must engage in this sly battle of wits and obfuscation. Additionally, playing the game safe and telling the truth for its entirety is certainly possible but not likely a winning strategy. This means you have to boldly lie and directly into the sweaty face of the miscreant sitting across the table. That single fantastic quality elevates the bluffing and social maneuvering experience into something that is altogether not good, but great.

Social games such as this boast substantial depth mainly surrounding the advancement and manipulation of your group’s metagame. In this way you are rewarded for repeatedly playing with the same collection of participants so that you can learn each other’s tells and mannerisms. Once you become aware of these indicators in your opponents it starts to really open up. Skilled players will manipulate your standard conventions and play off these tells to feed false information. This is all cleverly supported within the structure of the rules by the allowance of bribing via in game currency. This forms a satisfying undercurrent and pulse that can be likened to the rhythm section of a band, as you form patterns of offering coins in conjunction with specific behavior that forms the backbone of the direct conflict. There’s a wide range of freedom in how you approach this struggle as you can attempt some quite shady underhanded dealings such as offering a bribe to the Sheriff asking him not to open your bag while throwing out some nervous facial expressions only to pull your bribe off the table a moment later. When he opens your bag to find 3 completely legal bread and has to fork over a small bonus for wasting your time you’ll bust a gut and need a shower from rolling around on your nasty worn carpet that’s home to thousands of smashed Cheetos and hasn’t been vacuumed since Ticket to Ride hit the street.

The few mechanisms involved do fade into the background and just serve as a facilitator for this social experience, even more so than other similar titles such as the aforementioned Coup or Skulls and Roses. Because of this the game is definitely reliant on the participating group and can definitely crash and burn when playing with social outcasts like that guy who always shows up to game night but sits in the corner rocking back and forth while biting his nails and mumbling Andrew W.K. tunes (we get it, you like to party). This is a game that excels when playing with people whose company you enjoy while perhaps sipping an adult beverage or tossing insults like a free-styling Eminem on a makeshift stage in a Detroit warehouse.

Sheriff Of Nottingham is not exactly a new game, but it's one that the collective community should embrace with glee and it's a title that deserved to be back in print. The design is focused entirely on delivering the type of fun and enjoyment that most of us haven't experienced since playing with Legos or Lincoln logs as an innocent toddler. Who needs to convert a blue cube to a yellow cube or roll a pound of dice when you can look your spouse in the eye and reach through into their soul to strangle the life out of them while you incessantly squeal on the inside.

DeletedUser replied the topic: #197211 09 Feb 2015 13:46
I tried this game out on my game group and to my surprise it bombed. They just didn't embrace it and more or less broke it by pushing the limits on the deals, so much so that the bluffing element was lost and replaced with luck. I was actually a little pissed with the group for doing this but they do things like this now and again and there's not much I can do about it.

However, I tried it out on my two kids and it was a big hit. It became the instant favourite of my eldest daughter and I'm glad that it's starting to see some regular play. The kids love it when I act out the roles of the Sheriff and the merchants which has in turn encouraged them to do the same. Some adult board gamers could do well to play board games more like children.

Between Sheriff of Nottingham and Love Letter the kids are learning the intricacies of bluffing and I get a great sense of amusement when my 6 year-old manages to get one over me. Probably won't be so amusing when they're teenagers.

charlest replied the topic: #197215 09 Feb 2015 14:20
Yes, it can totally bomb with the wrong group. I think it tends to go over well with most groups that enjoy bluffing and social deduction style games (even though this isn't social deduction). It's very reliant on that social contract at the table and players providing for some necessary elements on their own kind of outside the rules rather than through them. The rules do tend to help spark that creativity but they don't require it.

cdennett replied the topic: #197309 10 Feb 2015 13:15
Got in my first game of this last night with 5 players, and it was generally liked by everyone, even by my resident fun-murdering cube-pusher. I won almost exclusively via legal goods, with just a handful of contraband. The funny part was I didn't really compete much on the King/Queen front (maybe got 20-30 points total), and assumed I was out of it because of that (and looking at the stacks of contraband in . Turns out the two guys with 15+ contraband at the end of the game over-spent on bribes and their lack of cash ruined them. I think I lost 2 or 3 cards total to inspection the entire game, never passing less than 4 cards, so I won with sheer numbers and cash.

I imagine a second game in the future will have different results as people have learned from their corrupt excesses.
Read More...