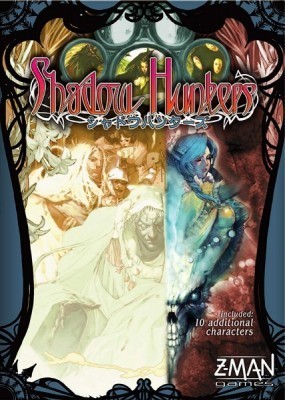 Overshadowed by the release of Arigricola, Shadow Hunters debuted this weekend at WBC with little fanfare.  While copies of Z-man's English edition of Arigricola were rushed to Lancaster in a Dunbar truck accompanied by an armed escort and a medical team, Shadow Hunters was unceremoniously packed into cardboard boxes for transport and appeared stacked on the Z-man table with nothing more than a post-it note displaying a discount price. It was easy to miss Shadow Hunters in the crowded vending room, or mistake it for a poor selling clearance item. Fortunately, I did neither and was able to pick up this awesome game, which we played until our sides ached from laughing and my brother Strider (not KingPut) earned the nickname of Douchey Boy.

Late Friday afternoon found me wandering through the WBC vending area in need of a little retail therapy.  I was specifically looking for something that would allow me to beat the crap out of something without having to first establish an economic engine, or a supply line, or some boring crap like that. I actually didn't have much hope of finding anything, but Strider wanted to take a look at the B-Movie games, so we went to check out the Z-Man table. Shadow Hunters was stacked up next to the B-Movie games, and the box art was beautiful. I had to pick up the box and take a closer look. Then I flipped the box over and saw the photo of the components - really intense colors, organic shapes and detailed illustrations.

A couple of words on the back of the box caught my eye: "Suck Blood" and "Rusty Ax."

"How do you resolve combat?" I asked Zev.

"Sold," I handed over my money.

We unpacked the game, and it didn't disappoint. This is a very pretty game. I like pretty. 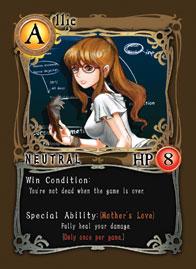 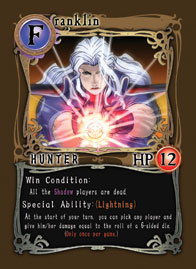 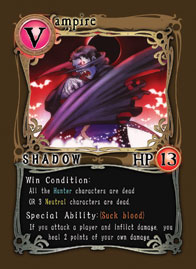 Character cards are sorted by type, and shuffled separately. Depending upon the number of players, a number of cards are drawn face down from each stack, shuffled together and then one card is dealt to each player. The players keep the identity of their character secret until their character dies, the player chooses to reveal their identity, or their winning condition it met. This means that the players know how many of each type of character are in the game, but do not know specifically which characters are in play or who has which character.


The small single fold board has a path on the left side for tracking hit points. 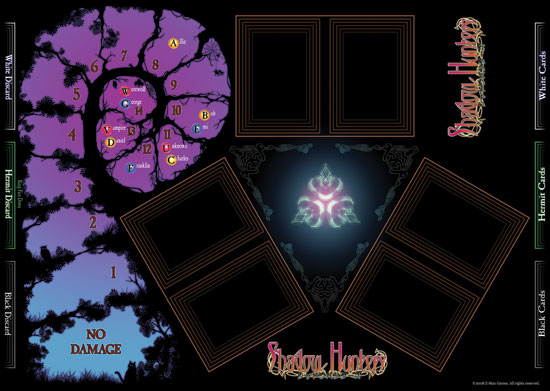 The playing area is three rectangles each of which holds two cards which are dealt out randomly at the beginning of the game.

Each of the 6 playing area cards has a number (or in some cases two numbers) on it and an optional action, such as pick an equipment card or heal a hit point. 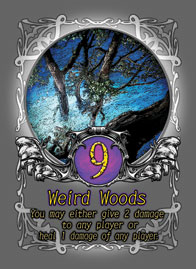 Play is simple roll. You roll the dice - 1D6 and 1D4. Move your pawn to the card that has the number you rolled printed on it. Decide whether or not to take the optional action. Then you decide if you want to attack any of the other players whose pawns are in range (i.e. on the same outlined rectangle that you are on).  If you choose to attack, you roll the two dice, subtract the lower die roll from the higher die roll, and deal the resulting amount of damage to your victim. 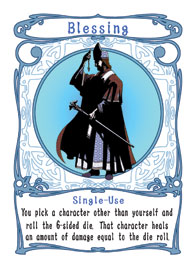 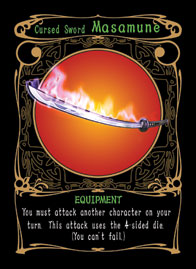 Unlike other games you may have played, you have no choice as to whether or not you use an equipment card. If you pick it (which is optional), you equip it and use it whether or not you really want to. Plus in both the White deck and the Black deck there are some Single-Use cards which MUST be played Immediately and can be totally nasty, such as Dynamite, which makes you roll the dice and all characters on the space that has the number that you rolled gets 3 points of damage, including you if you happen to be on that space. So if you are one of those people that whine about how hard it is to heal when playing Talisman, we don't want you playing this game with us, because everyone is going to get hit, and nearly everyone is going to die and, at the rate of about 2 or 3 points of damage a pop, it's going to happen really fast. The box says that the game takes 60 minutes. I'd say that it is closer to about 5 minutes per player - at least the way we play.

So, you are thinking, what fun is a game that has you totally randomly killing with little choice. Well maybe not, as totally random death can be fun. However, despite the appearance of few choices, there is one really important choice in this game that you must make on every turn - whether or not to attack. Remember, attacking is optional. The winning conditions are such that players can win even if their character is dead. The character distribution is such that everyone has allies and enemies. The meat of the game is, therefore, in identifying who is your ally so that you can avoid doing damage to them, and who is your enemy, so that you can smack them down at every opportunity.

The way you figure out who is who is by landing upon a space that allows you to pick a green card. 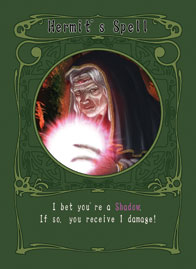 These cards have specific instructions on them, such as "If you are a Hunter, take one point of damage." When you pick a green card, you read it and then pass it to another player who follows the instructions on the card and then discards the green card face down. In this manner, you can begin to determine who is who.

Once you have a few bits of information about a player or two, you may be able to determine if others are your ally or enemy based upon who is attacking whom. However, you must keep in mind that there is one Shadow Character, the Unknown, whose special power is that they can lie when handed a green card. Yep, that's right. You have to determine who is your enemy and who is your ally while taking into consideration that one of the players may be lying.  Additionally, the Neutral characters have individual winning conditions which are not necessarily mutually exclusive to any other character's winning conditions, and therefore may negotiate alliances. Finally, you only have tell the truth, unless you are the Unknown, when handed a green card.  At all other times you are free to bluff, back stab and lie your ass off. To win, it is really, really important not to kill off your team mate. Therefore it is also important to keep people thinking that you might be their team mate as long as possible. Finally, it is helpful if you can convince your enemies that their team mate is their enemy, so that they kill off their team mate for you. Then, of course, if you just get totally confused, you can just go kamikaze like Douchey Boy and attack everyone.

Shadow Hunters feels a little like Werewolf, Lifeboat, Bang, and Ca$h n' Gun$. The game is all about the art of persuasion, social interaction, bluffing, backstabbing and negotiation. Also, probably a fair amount of cussing, cursing, threatening, trash talking, begging, pleading and name calling.  Plus Blood Sucking and whacking each other with a Rusty Ax.  What's not to love, especially when it plays up to 8 players in an hour or less.