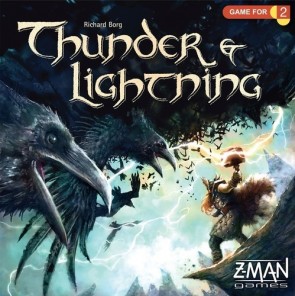 The biggest shock I got from Thunder and Lightning was seeing Richard Borg's name on the cover. He's become so synonymous with the Commands and Colours series that it seemed bizarre to remember he had, on occasion, designed other games. One of them was a 2-player card game called Hera and Zeus which has now been reskinned, rethemed and retitled as Thunder and Lightning.

I never played the original, but cosmetically it looks like an impressive upgrade. Aside from the box art, which appears to show a tiny Thor being menaced by a muster of gargantuan ravens, the production is fantastic. It includes two shiny embossed wooden pieces, one for Thor and one for Loki, which appear to have no needful game function but do look rather lovely.

Switching to martial Norse mythology also seems to suit the fairly abstract mechanics a little better too. Players play cards with numeric strength values face down into into three columns. The cards at the head of those columns can challenge their opposite number, higher strength winning. If it sounds a little like Stratego, fear not: there are plenty of other cards with special effects to mix things up a bit.

Ravens, for example, let you scout out face down cards by challenging them directly from your hand. Odin, Hel and Longships allow you to root around in your discard pile to regain cards of various sorts. Valkyries and Baldir can put in an appearance to rearrange card columns on one side of the board or the other. Shield Walls beat anything except for archers, but can't initiate challenges. The decks for each player are almost entirely identical, but big enough to ensure you're not playing like against like the whole time.

Key to the whole edifice is that you get one action - play, pick up or challenge - on your turn for each card column you have. Depriving your opponent of a column  is thus an easy way to gain the upper hand. The need to get that column back adds a bluff element to the game whereby you can deliberately play understrength cards in the hope your enemy won't second guess you.

You might think that all that face down play, and all those special effects lurking in the deck would make this quite a chaotic game. And you'd be right. Initial draw and placement is a complete crapshoot and it's entirely possible to start with a bad hand or make a bad blind initial play and for it to dictate the entire game. At up to 40 minutes to finish, that's not a small ask, although poor starts do tend to lead to shorter games.

On the flipside, managing the chaos is where much of the fun is. There's a surprising number of ways to get creative in terms of getting past enemy cards which nothing in your column can beat. Some effects allow you to win ties or increase the strength of your troops so long as that card stays on top of your discard. So the game then becomes one of trying to keep it there as long as possible. My personal favourite is the Nightmare, a lurking horror that nukes the entire column for both players if it's revealed.

The game is full of these sorts of unexpected gotcha moments, little twists and turns that keep you interested. The unexpected Nightmare that blows away all your best troops. The quiet face-down card in the first row that you take for rubbish but which turns out to be a Shield Wall.  The empty column that's suddenly solved when you pull Fenris off the top of your deck. There's always something to keep playing for.

Although I've enjoyed Thunder and Lightning, I do have one gripe with it: it's not Battle Line. The two games have a surprisingly similar feel of building up troops to overcome an opposing buildup on the other side, with special effects cards to spice things up. For me, Battle Line is the superior game in almost every respect. It's more exciting, faster playing and demands greater skill. I'd pick it over Thunder and Lightning every time except one, which is family play.

My ten year old hated Battle Line. She understood the rules but couldn't grasp how to play effectively and rapidly gave up. But she took to Thunder and Lightning like a Viking to Valhalla, confidently slapping down cards and bluffing me with great skill and greater glee. The added luck and the more approachable theme helped a lot too. This is very much a game I can see having wide appeal for anyone who doesn't mind a bit of direct conflict.

So Thunder and Lightning earns a spot on my shelf, even if it has an obvious and superior competitor. While I might want to swap it for a game of greater skill and tension, I'd never swap the consternation on my daughters Battle Line face with the sheer delight she took in this game. It's going to be a staple for a while to come.

May 02, 2019
Rating
3.0
Thunder and Lighting
Competent two player duel that can't quite shake the sense that the early game is just filling time for a couple of late game plays that decide the winner.
MT
Matt Thrower #1 Reviewer 286 reviews

Does anyone know if there are changes other than art to the game?

You mentioned wanting to keep 3 columns for maximum actions each turn, one thing repeated plays have taught me is there is a time when you want multiple actions and other times (late game) where having lots of actions can cause you to lose the game, because if you can't use all your actions in a turn you lose.
Read More...