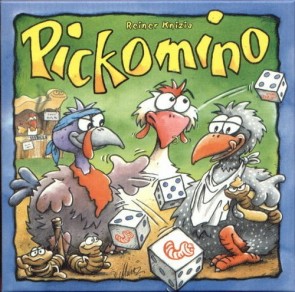 Have you ever looked in the mirror and asked yourself the really tough questions?  What does it all mean?  Why are we here?  Do I need a game about chickens eating BBQ worms?

Pickomino is a press your luck game from the good Dr. Knizia that on the surface has to deal with the crazy, fowl world of consuming delicious roasted worms.  The instructions manual has a paragraph describing the whole premise and it’s one of the most absurd things I’ve ever read.  So much thought went into the pasted on theme of a game which boils down to rolling dice, adding up the total pips, and collecting a tile.  Still, the theme is just weird enough that it works.  It reminds me of Bohnanza where once you start explaining it, people can’t help but pay attention because the whole premise is so bizarre.  For a family game night, that instant, disarming, hook is always a nice bonus.

The game of Pickomino boils down to rolling eight dice and choosing a matching number value to collect.  You set aside all the dice with same value that you choose to collect, then either choose to continue rolling or stop.  The first wrinkle being that if you select a number value to set aside, for the rest of your re-rolls you cannot select that value again.  So if you roll all the dice and three of them are showing 5’s and you choose to take them, then on your future rolls you can no longer choose any dice that show a 5.  With each new roll you make you have less dice to roll AND less number values to choose from.   So if you ever roll and there are no valid numbers to choose then you busted.  Busting is bad.

The reason you’re rolling dice is to add up the totals of the dice you set aside.  In the center of the table are plastic dominoes that range from 21-36.  The lower numbered tiles have a single worm printed on them and the higher numbers have 4 worms.  At the end of the game the player having more worms on their tiles than everyone else wins.  You collect a worm tile by adding up the total number of the pips on the dice you've collected without busting, and if that number is high enough to land in the range of worm tiles you can take a domino of the number you rolled.  If the number you rolled isn't available you can snag the next lowest worm tile.  This continues until all the worms are gone.  That’s it.

Actually, that’s not it.  If that were it the game would be dreadful.  There are a few simple rules that help spice up the affairs and bring the press your luck aspect to the forefront.  First, on the dice you roll there are no 6s.  Instead that side of the die is replaced with a worm symbol.  What I failed to mention before is that you cannot collect a tile unless during your dice rolls you select and set aside at least a single worm symbol.  Worm symbols are worth 5 when adding up the total value of your dice.  So they’re great to roll.  However, to get a really high valued worm tile you want to roll as many 5s or worms as possible.  This creates situations where players purposely select a low number that they rolled in hopes of getting more 5s or worm symbols on their next roll.  However, it's important to remember that each time you choose to press your luck you’re rolling fewer dice.  The dice you select to total up for your turn are removed and you don’t re-roll them.  It’s a simple rule, but it adds a tantalizing choice each time you roll the bones onto the table.

The other feather in Pickominio’s cap is that when you collect worm tiles you place them in a stack in front of you.  Each new tile you collect is placed on top of the previous worm tile you successfully obtained.  Why is this necessary?  Well, if you roll the number of a worm tile that on top of an opponent’s stack you can just steal it from them.  This does two things that I like.  First it adds some direct screwage.  And a little confrontation is always good in a short little family style game. Second it adds gasoline to the press your luck dumpster fire.  Just rolling enough to get one of those crappy lower numbered worm tiles means it’s probably going to get stolen.  Knowing this provides incentive to say, “Screw it!” and try for a higher roll.  What usually ends up happening is that people around the table will goad others into another re-roll.  When it blows up in their face it’s great.

The final "master's touch" from Knizia is that when you go bust on your turn you have to return the top worm tile of your stack to the center row of worms.  You also must flip over the highest numbered worm tile remaining.  So not only does the game punish you for busting, it also has a nifty mechanic that keeps the game from running too long.  I feel like Knizia NAILED the risk vs reward necessary to make a press your luck game interesting and fun.

The only thing that I don’t love about Pickomino is that with more than four players it tends to run just a hair longer than it probably should.  With four I find that it plays in about 20-30 mins and that feels right.  I’ve played it with six and it will last from 30-50 minutes at that player count.  I still have fun at the higher player counts, but if you’re looking for a real quick filler for a game day this isn’t it.  I usually play Pickomino in a family game night setting where we only play one or two different games.  So the length doesn’t usually matter.  You might want to be aware of it though.

This game gets an easy recommendation from me for two specific purposes.  If you’re playing games with friends who’ve never ventured past Monopoly and Apples to Apples it’s a nice gentle stepping stone into something outside their comfort zone.  The BBQ worms and chicken theme is incredibly disarming and the gambling, press your luck dice rolling is easy to pick up and more importantly, addictive.  The other purpose of this game is for something to play while sitting around, shooting the breeze and drinking.  Pickomino is perfect for drunken play sessions because you really only need to pay attention when the dice get plopped in front of you and someone says, “It’s your turn!”  Then you roll and see what happens.  The stealing of worms adds enough interaction without being too mean and being drunk while discussing worms usually leads to ridiculous table talk.

Reiner Knizia has probably designed a hundred games over his illustrious career.  Several of them are load-bearing pillars that paved the way for this modern boardgaming renaissance.  Pickomino is one of his smaller, family style games that gets overlooked.  If you’re a dice chucker at heart and you play with family or drunks…or your drunken family, then try it out.  I’ve had a blast with it ever since it was shown to me.

On a scale of meal worms to Dune's Sandworms

This has become a popular game amongst our lunch time group - mainly because I'm legendarily bad roller.

trif wrote: I think the maths behind it also form the basis for Risk: Express / Art of War.

Huh...I don't think I ever realized that.

And yes you're right. This one would make a terrific little lunch group time waster. It's so short and easy...but each turn is filled with excitement or fits of rage. I'm a big proponent of games that elicit emotions from players and Pickomino succeeds greatly in this regard!

Apparently there are expansions to Pickomino. Has anyone here ever dabbled with any of them? I've always been curious, but at the same time, cautious not to add to the successful formula of the base game.

Michael Barnes replied the topic: #231773 10 Aug 2016 21:40
I miss that time when games coming from Europe in particular has these kinds of WTF concepts. Like the first time I showed Bohnanza to people- "it's about bean farming". Table- "wtf?"

Egg Shen replied the topic: #231782 10 Aug 2016 22:52
Yup. Those batshit insane settings are so perfect at reeling in a table of unsuspecting players. They're definitely from a by-gone era. For a lunch time group or family game night I've always been able to quickly hook people with Pickomino, Lord of the Fries, Bohnanaza, Magical Athlete etc... Saying we're playing a game about a zombie fast food restaurant, chickens eating roasted worms, or bean farming oddly enough almost always piques people's interest. Sure they think you're fucking nuts and that you own weird ass games...but they're interested in finding out more about them. Hell, many of them hop on Amazon.com and purchase the game immediately afterwards. I know of 4 people that ended up Pickomino right after they played it. The game is just addictive as all get out.

birdman37 replied the topic: #231785 11 Aug 2016 02:11
What's the correct syllable to stress when pronouncing this? Pick-OM-ino or Picko-MIN-o? Either way, you've just made a sale - I bought this on Amazon after reading this review. You're in the big leagues now, Egg - you should start soliciting games off publishers!

(In all seriousness, thanks for the review - great read!)

Jazzbeaux replied the topic: #231786 11 Aug 2016 04:01
An excellent game that I have played many many times myself for the reasons you note in your review. However I recently discovered that there is an expansion!
heckmeck-extrawurm

No idea if its any good, indeed I tend to think it will break the simplicity of the base game. Has anyone tried it?

Ken B. replied the topic: #231802 11 Aug 2016 10:36
One of the great dice filler games. We've taken this on vacation many times, it's always a hit. Travels well too, you just stick the tiles and dice in a small ziploc and you're good to go. I've played it with all sorts of groups and it just works.

You will never know the pain of rolling four fives, keeping them, and not hitting a worm after. Sometimes those guys are little bastards.

birdman37 wrote: What's the correct syllable to stress when pronouncing this? Pick-OM-ino or Picko-MIN-o? Either way, you've just made a sale - I bought this on Amazon after reading this review. You're in the big leagues now, Egg - you should start soliciting games off publishers!

(In all seriousness, thanks for the review - great read!)

Ha! The pronunciation of the game is always a hotly debated topic among people I introduce it to. I've always said Pick-OM-ino...sort of like they made up a word for the sentence, "pick a domino". No clue if that is correct or not.

Thanks for the feedback...I appreciate it. Honestly, I wasn't sure how a review for a silly little dice game from "way back when" would go over with the F:AT crowd. Glad to know that people enjoyed it.

Might be time to get out the craft knife and glue...