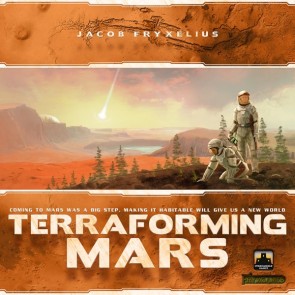 Like so many others I have a hard time discerning between good games and games that are all hype. It's hard to tell when BGG fads are fads, or when you can feel confident buying a game. That's why I was excited to play Terraforming Mars at Trashfest East this year. Besides meeting a bunch of awesome people, and drinking the coldest cheapest draught in Vernon, CT, I got to see if this new game from Stronghold was as good as the internet says. Now I hope to pass on a bit of my good fortune by writing this review, which should, at least in part, help you decide what you think about Terraforming Mars.

A couple of weekends ago, I had the pleasure of attending Fortress Ameritrash’s Trashfest East 2016, at an Elk’s Lodge in Vernon, CT. This was my first time attending a small con, and I really wish more of them would pop up. If any of you have the chance to attend a smaller con, I suggest grabbing a ticket, because the lax atmosphere translates to hours of nonstop gaming. Plus the beer on tap was $3.50 a half liter, and not half bad.

Throughout this gaming extravaganza I got the chance to play a lot of hyped titles, one of which was Jacob Fryxelius’ Terraforming Mars. For those of you unfamiliar, the game is a euro-leaning pallet-builder, in which players take the role of mega-corporations that are terraforming mars for human use.

Thematically, the game takes course over generations, represented by rounds. Each round begins with some card drafting, followed by players using those cards in turn, until all players pass on the round. As players play cards, they raise the temperature of mars, irrigate the planet, and build cities and forests on the surface. Successfully terraforming in these ways gains players victory points, which win them the game.

Despite its science fiction theme, Terraforming Mars plays primarily like a euro. Action cards you play are placed into a pallet in front of you, imparting victory points based on card type and the like at game’s end. Many action cards also have a sustained effect, usually increasing resource production, and often including drawbacks to balance a player’s power.

Constantly players are required to play cards with these production drawbacks, often making the most effective path to victory a focused investment in one field of production. That way you can turn the massive amount of plants (or whatever) you have cultivated, into any other necessary resources.

This may seem like a simple path to victory, but the card drafting mechanic that begins each round of play, adds a healthy dose of chance to the mix, requiring your strategy to be flexible, as well as defined. The four cards you draft from each round define a significant portion of play, and each card you choose to draft costs three gold. This sum is not insignificant, especially when drafting multiple cards. So while you begin to become a titanium powerhouse, you also risk not drawing more titanium production cards, and must weigh whether the titanium cards that do come your way are worth paying for, just to get in you hand. You may even end up paying for cards that you don’t really want, just to have cards to play, a further stretching of precious resources.

Because the drafting portion of the game holds so much weight, it is this portion of gameplay that really defines Terraforming Mars for me. If you’re not skilled at drafting, or just get bad draws, or didn’t change your strategy at a pivotal moment revealed by a good card draw, you won’t fare well, regardless of how well you play otherwise. On the surface, Terraforming Mars appeared to me to be map-focused. But as you can see, the card drafting mechanic is innocuous, a central portion of gameplay. I think anyone thinking about buying Terraforming Mars should consider this, as it really colors how the game feels.

And that was my experience with Terraforming Mars. A game that requires the mind of a euro-player, but constantly provides moments of tension, head scratching, and frustrating hindsight. A design which incorporates the randomness of card drafting into an 80% euro build. Paired with a science fiction theme, I think this is a great euro style game for ameritrash players. And a great ameritrash-flavored game for euro players at that. Its theme is fairly well integrated, not feeling completely pasted on, and although the card art leaves something to be desired, the subject of Terraforming Mars is a refreshing departure from the “cowboys with lasers” feel of many science fiction games.

Now I’ve heard people talking about this being their favorite game of 2016. And while I don’t feel quite that strongly about my experience, this is not one to miss if you get the chance to play it. I don’t think it is a must-buy for everyone, but I do think that for some, this will be a permanent game in their collection. It’s design is on the cusp of greatness, and I’ll certainly have my eyes peeled for new games designed by Jacob Fryxelius, as well as new Stronghold Games productions.

ChristopherMD replied the topic: #240242 09 Dec 2016 11:58
I like the setting at the very least. Much better than settling ancient Egypt or worse some bland "medieval times" like Dominion. Initially didn't plan on checking this out but this review and Legomancer's comments have put it on my radar.

My dad was a salesman, until he started his own business and took on more roles, so I grew up dealing with hype. I know all the standard sales tactics and am highly resistant to them. Consequently, I usually have zero trouble discerning between good games and hype games, as long as I have at least some info to look over. Or I could be completely delusional and suffering from extreme confirmation bias. Probably some of both. Either way, I enjoy most of the games that I have acquired over the years.

Excellent review, because there is enough detail that I can see a decent game of a type that I don't enjoy.

Feelitmon replied the topic: #240262 09 Dec 2016 14:42
This is a really useful review for me, because the near universal acclaim for Terraforming Mars had me seriously considering it for my group. But the Auction and Drafting mechanics are possibly my least favorite board game mechanics, so I think I may just steer clear of this one. I have friends who love auction games, and I figure they can buy it if they want to play it.

This has made me consider auctioning and drafting more deeply though, especially since I do enjoy some games with those activities. Tides of Time is a recent two-player game that is built around the "choose a card and pass the rest" mechanic. I don't know if this strictly counts as an auctioning or drafting game, although it's close enough that I would normally find it to be a chore. And yet I really enjoy Tides of Time, whereas I detest games like Catan. I think the difference is that a game that has auctions or drafting only at the beginning of the game can just leave you royally screwed over and with no way to auction or draft your way back into contention. Many times I have played Catan only to experience that sinking feeling of knowing that you're going to lose, knowing that you can't really do anything about it, and knowing that it will take another 90 minutes to happen. Meanwhile, a game that has that all throughout the session gives you ways to mitigate bad auctioning / drafting decisions with better ones.

It sounds like Terraforming Mars isn't like that though, and has auctions / drafting throughout the game. So maybe I wouldn't hate it after all, heh.

JEM replied the topic: #240267 09 Dec 2016 15:25
The draft is actually an optional rule. I personally prefer to play with it (and I hate most drafting games like Seasons, 7 Wonders etc). There are no auctions in Terraforming Mars.

The drafting is optional and minimal. Each round you get four cards, and you can buy any number of them for $3 each. If you're using drafting, you draft the four cards. That's it. It adds some time to the game, and it gives players a little more control, but it's not as central to the game as, say, 7 Wonders.

I taught TM at Trashfest. Were you one of the players?
Read More...