An Ode to Runebound Third Edition 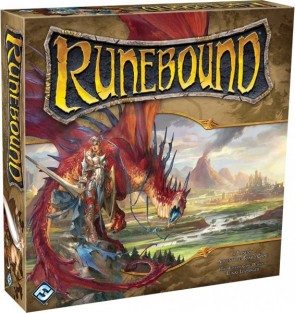 Here's the thing...I hate most adventure games.  Most of them follow the Talisman model of "throw a bunch of randomness and meaningless decisions into a blender and serve as a 3+ hour black hole of fun".  Relic ameliorates this somewhat by bolting on a layer of mildly meaningful decisions via the power cards and segregated threat decks, but it's still almost completely random and overly long.  It also, like most adventure games, feels like multiplayer solitaire.  The only adventure game I ever really loved (as an adult) was Mage Knight, but Mage Knight goes in the complete opposite direction.  Mage Knight is a brain-burning orgy of complex and important decisions...for 3+ hours.  It's an imposing beast that plays best solo and requires a huge mental commitment to play.  If only there was something in between the two extremes, a fun thematic adventure game that required you to make meaningful and intuitive choices without melting your cerebral cortex, didn't feel like multiplayer solitaire,  and wrapped up in 2 hours or less.  Now there is, Runebound 3E, and we can't stop playing it.

One of the key reasons for this is the skill deck.  In Runebound 3E one deck of cards serves 3 purposes: It provides you with skill options you can buy with trophies (xp) to upgrade your hero, a resource to spend powering up your abilities and getting rerolls, and a succeed/fail mechanic for attempting attribute/ability tests.  So much fiddliness out the window, while losing nothing and introducing constant meaningful choices!  Do you exert and spend that skill card to try for another point of damage against the ogre, or save it in the hopes of learning it as a new ability that perfectly synergizes with your character?

The other key advantage of Runebound 3E is the combat system.  It uses what are essentially pogs in a way that I've never seen before in a boardgame.  The pogs are double sided (obviously) and each side has a symbol that represents something in combat (a point of damage, a surge to power an ability, a shield, double the power of something else, etc).  Each character starts with 3 unique pogs, and most of the weapons/magic items/gear you find in your adventures are also represented by pogs.  It's one thing to get +1 to a die roll because you found a souldrinking sword, but quite another to get a unique new pog to fondle that can thematically slurp away an enemy pog of your choice in combat!  Combat basically entails both sides tossing their pogs and then taking turns applying effects.  It's simple, tactile, fun, and involves an increasing amount of strategy as your hand grows from 3 pogs to 6 or 7.  Best of all, when you face off against that ogre it's one of your fellow players casting the ogre's pogs and trying to smash you, so the other players have something to do even when it isn't their turn.  So, do you see that your opponent is clearly stockpiling gold to buy a Vorpal Sword that you have your eye on?  When you control the bandit fighting him, use the surge token to steal his gold instead of dealing damage to him!  It's so simple, so brilliant, and adds so many meaningful choices without adding complexity or fiddliness.

Tired of adventure games that long overstay their welcome as everyone powers up to 11 before taking on the big boss?  Runebound 3E keeps the proceedings to 2 hours or less by hardwiring a turn timer into the DNA of the game.  That's right, everyone knows when the game will end so if you haven't won by then everyone loses.  The developer of Runebound 3E, Lucas Litzsinger, should be celebrated as a hero.  Yes, he's responsible for the modern Netrunner revamp, but I couldn't care less about that.  His true feat of valor is wading into the swamp of meaninglessness that is the adventure game genre and coming out with a masterpiece of streamlined and intuitive game design, featuring the most rare and precious of things in the gaming world; a brand-spanking new mechanic that actually brings something unique and interesting to the hobby we all love so much.  Ignore the reactionary man-babies that whinge about the pogs replacing their beloved dice-based nonsense from decision-free Runebounds gone by.  Tune out the bizarre fearmongering about the pogs getting worn out (we've played dozens of times and our pogs are pristine) or the dice having stickers (the stickers perfectly match the board terrain they represent, which is why they're actually superior to etched dice for this game, and are recessed so they don't wear off).  Don't miss out on what I dare say is the pinnacle of adventure game design!  This game has effectively replaced Mage Knight for our group, which is the highest of praise considering we took turns licking the Mage Knight box for years.  When faced with the hunger for an adventure game, the great Mage Knight now seems imposing and taxing, like a fun accounting spreadsheet that is still an accounting spreadsheet.  We're spoiled by the inviting and silky wonders of the younger and tighter Runebound 3E.