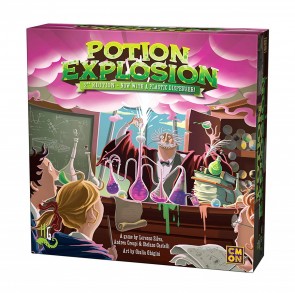 However you might deny it, there's a comforting nostalgia in games that remind us of toys. Memoir '44 and its box full of plastic tanks and soldiers. The link between the Star Wars games of now and the action figures of yesterday. And now Potion Explosion, which is full of marbles. In four bright primal colours. A shame, then, that they're cheap marbles, chipped and misshapen. To make the game work, they need to roll down chutes and sometimes the chunky ones get stuck. Nothing a quick tip won't fix, but annoying.

The marbles sit in a cardboard dispenser, part of which is blocked from view while the other part displays five chutes. You need these marbles to craft potions, and you can take one each turn. If removing the marble causes others of a matching colour to touch, you get all those in the group, too. If that causes more matching marbles to touch, they're yours as well, and so on. Hence the need for them to roll freely in the chutes.

Marbles are the reason Potion Explosion is the first in this little series about innovative games. But to start with, I didn't really see where the innovation was. It's not a great stretch to see that marbles will roll, nor to imagine the game was inspired by match-three games like Candy Crush. The marbles, however, are a delightful distraction. They're not where the cleverness of the game lies. Instead, it comes from your optic nerve: from the gulf between your eyes and your brain.

You can have two potions on the go at once, taken from the top of five stacks. Each demands different ingredients in different amounts to finish. One might need three fairy tears (yellow marbles) and two drops of ogre mucus (black marbles). Another might need one yellow, three blue and four black. Potions that demand larger amounts of ingredients tend to be worth more points. Plus, once you've finished a potion, you can use it. Most grab you extra marbles in one form or another: any two adjacent, any number in a group of one colour, any unused ones from another player's collection.

To win you need to selection potions carefully. Both for the effects you want, and the point values and how easy they will be to brew based on the marbles in the tray. So you look at the tray and suddenly you're not thinking about strategy any more. You're thinking about patterns. The jolt is sudden and surprisingly hard, each and every time. It's also more challenging and more fun than you might imagine. That's the game, right there.

Although a bit lightweight, it makes fantastic family fare. The rules are simple. Everyone loves the marbles. It takes about ten minutes per player, less if you don't waste time adjusting between patterns and strategy and just plunge right on regardless. It's also one of those games that's engineered to pretty much guarantee a close finish. So all the players feel they might have won, if only. They'll do better next time. And there will be a next time, probably quite quickly given the ease and the appeal of the game.

Close finishes, though, can make it hard to spot where the strategy is. After several games it felt as though perhaps there wasn't very much. That maybe winning came down to what potions or what marbles were available to choose when it was your turn to do so. After several more it becomes clear that this is not the case. The strategy is in making the best choices out of those available, and of learning to use your potions at the right time.

It does seem a shame that so many of the potions just grab you more marbles. They're potions, magical drinks, things you might imagine to have all manner of weird and wonderful effects. They could be used to increase the limited levels of interaction, be more than just multi-coloured marble collectors. But on reflection, it makes sense. Early on you can take an extra marble for a small point penalty. Later, potions fulfill this role. What both let you do is set up massive explosions, netting you a ton of marbles. These are tricky to see at first, but come with practice. Again, the sweet headache of switching from strategy to patterns and back again.

There's much to enjoy here, from the pleasant rattling of marbles in the chutes to the way it exercises parts of the brain other board games do not reach. Indeed its range of appeal might be its greatest weakness: anyone but the heavyweight hardcore will find fun, but perhaps also find the whole a little unsatisfying, spread a little too thin. But games with such wide attraction are rare, and so the width of its reach becomes an attraction in itself. The whimsy, the inventiveness and the rolling marbles are just the icing on the magical cake.

Legomancer replied the topic: #246713 18 Apr 2017 09:06
I bought the iOS version of this and played through the tutorial. It's undoubtedly more fun in person, but the game itself didn't do a lot for me. I'm not a beard scratcher of a gamer, I just didn't think what was happening was very interesting, and found the "explosion" bit kind of underwhelming. It's a fun idea, but not something I'd seek out to play, or even just waste time with on the iPad.

RobertB replied the topic: #246956 22 Apr 2017 15:08
After reading the review, I bought a copy. I was looking for something for the family gamers; a little different, not too complicated, and no direct conflict. I played a whopping three games of it with my wife last night, so I'm now an expert. What I found was:

- The component quality is a little lacking. Matt has mentioned this above. The marbles kind of suck, some of the cuts in the cardboard are conspicuous by their absence, and the marble machine can be a touch delicate. Pick it up wrong when fully loaded, and it will fall apart just enough for the marbles to come out.

- The rules are okay, not great. There are some corner cases concerning the 9th marble in the chute that aren't covered in the rules. However, it's Potion Explosion, not Magic: The Gathering. We just made a rule that made sense to us and pressed on.

- AP is lurking in there. You can end up scratching your head for a couple of minutes trying to maximize your turn. And sometimes you don't get a chance to think real hard about your turn until it's your turn.

However, we did have fun. I ran off with the first game, because I got it a little faster. I lost the other two though, because she got it a little better. Scores were close, with two points between us in both games. I'll play it again.
Read More...