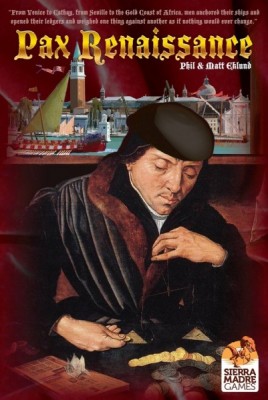 I find games with a point of view endearing, whether or not I agree with it. In Labyrinth War on Terror Dick Chaney was right, in Pax Renaissance Martin Luther nailed his thesis to a door because the Fugger bank of Ausburg slipped him a 50.  Pax poses a history where bankers were the real play makers, pulling the strings behind the rise and fall of empires, driving the spread and evolution of ideas, and creating the genesis of the modern world.

How you feel about Eklund games probably has a lot to do with how you feel about complexity for the sake of complexity and artistic aim in a designer. One thing I love about Space Hulk, Tigris and Euphrates and Ukraine 43 is the amount of millage they get out of a streamline ruleset. I do subscribe to the view that a good game is only as complex as it needs to be, and fat should but cut where ever it can. However with Eklund games I think they have to be complex to pull off their conceit.  High Frontier only works because it looks complicated, it is a game about rocket science and it feels like it. Pax Renaissance only succeeds in convincing me I am the medieval illuminati because of the multiplicity of systems I am trying to simultaneously control. If the game were streamlined I would not be the puppeteer trying to grasp too many strings but just a trader in the Mediterranean.

Like the other games in the series this is a tableau builder card game vehicle for a power struggle between players. Cards come out into two conveyer belt markets from which you buy Turkish pirates, inquisitors, Flanders Guilds etc. Most cards when you first play them give you a ‘one shot’ to launch a peasant revolt or a crusade or some other combat driven carnage that reorganises pieces on the map, and perhaps gives you one of the games 10 empire cards pushing you towards victory. It has lots of unique cards, lots of systems, a tiny box and an unforgiving rulebook.

Unlike the other games it seems to come in consistently on or under the hour mark. It also feels both simpler and more complex than its brethren. There are more systems and more rules, there’s a trading in the Mediterranean system for dispersing money to your traders around the map, there are four types of combat and a loads of different wooden chess pieces that mean different things depending on where they are on the map. It’s a pain to learn. On the other hand as the victory conditions stay in play once active and the take that elements are far more restrained than its predecessors actually playing the game feels a little easier. There are relatively few ways to kill your opponents’ cards with only the empire cards really moving between players, as such the game feels stable. It is also a lot more forgiving of minor mistakes. There are four victory conditions, a religious one, a trading one, an imperial one and a republic one, two of these revolve around having the most empire cards and the other two around having specific pieces of the map. Compared with Porfirana and Pamir these are easy to grasp, the destination is clear it’s just getting there that is the hard part.

Sometimes getting your target victory condition is as simple as buying a card or two, more often you realise your need to complete a profitable trade fair to buy once specific card to instigate a civil war in Byzantium ending its republic and thus handing you the Renaissance Victory. But then someone steals Portugal from you and the only rational response is to burn their priests!

Gary Sax replied the topic: #248196 11 May 2017 22:57
You may have totally sold me on Pax Ren with your discussion of how it's a tad less take that and your cards stay around a little longer. That sounds great to me. I love Pax Porfiriana but I definitely see a place for a game where your position doesn't clean wipe so frequently.

Msample replied the topic: #248215 12 May 2017 10:37
Maybe its all the games I've played on Yucate.de lately, but Pax Porifiriana is still more intuitive to me than REN. With the latter, the four completely different win conditions are harder to keep track of than the Topple or Gold victory. I played REN this past weekend and totally missed a Religious victory til it was declared. And while I agree that REN has less "take that" card play, when it does happen, it can be harder to predict and come from a wider variety of sources . I think REN is the richer of the two games and both are worthy additions to any collection.

Unicron replied the topic: #248217 12 May 2017 12:44
Great review! I agree with Duke about every point except the complexity. I found Pax Ren more complex than Porfiriana or Pamir, but that may be the over abundance of info on every card, a map that flips over, the various one-shots, and ability to activate everything on one side of your tableau with a single action. It's not a game where one can plan their actions in intervening turns. The market was really difficult to read. I had a hard time getting gauging the game state from one turn to another. There is plenty of depth to the decisions players can make, but the clutter of graphics and text on each card with the lack of useful player aids tends to obviate that. I prefer struggling with other players to struggling with the design. I'm relieved, however, that Scott has stopped bringing it to my house:)

Scott_F replied the topic: #248226 12 May 2017 14:40
Bastard. Pax is great in all forms. I've had 2-3 games active on yucata for the last couple months for Pax Po and continue to love it. Pax Ren remains difficult for me to sell to new players. It is a smaller deck and shorter play time, but the icons and lack of aid makes it tough. Just the idea of pax ren is tough to sell - in Po you clearly are an identity, and pamir you are one of three empires, but Ren you are just your tableau and how it translates to the map. Pamir is my least favorite of the three, it feels so tightly controlled and limited compared to the other two. Still good though.

Scott_F wrote: Bastard. Pax is great in all forms. I've had 2-3 games active on yucata for the last couple months for Pax Po and continue to love it. Pax Ren remains difficult for me to sell to new players. It is a smaller deck and shorter play time, but the icons and lack of aid makes it tough. Just the idea of pax ren is tough to sell - in Po you clearly are an identity, and pamir you are one of three empires, but Ren you are just your tableau and how it translates to the map. Pamir is my least favorite of the three, it feels so tightly controlled and limited compared to the other two. Still good though.

I need to get PAMIR back on the table. The closed loop nature of the economy makes it feel very different. Supposedly the expansion opens things up a bit.

I've logged over two dozen plays of Pax Porf this year and am still learning new things about the game. I wish someone would code Pax Ren for Yucate as well.

Vlad replied the topic: #248257 13 May 2017 00:35
I have never played one of Eklund's games, but I love reading about them. This in particular sounds fascinating. A game of shady power brokering in Renaissance is just my cup of tea. However, I can't really imagine how this complicated system does get played out in one hour. How many players are there? Is there any negotiation at all involved, a la Dune or COIN games?

I totally buy that, by the way. Not sure if the Fugger Bank approached Martin Luther, or Martin Luther went to the bank asking for a loan, but very few things happened/happen in this world without a proper financial backing.

The game works well 2-4, there isn't much negotiation, or at least as much as there is any in multiplayer game where you can get at each other. The Pax series is probably closer to COIN than Dune. Dune is all about leveraging player powers and board position in negotiations, this is a bit like COIN in that theres a lot going on and power being pulled back and forth. Less negotiation than COIN but it feels similar in some respects. Pax Pamir is a bit like COIN the card game, though it is my least favorite of the series for similar reasons to Scott.