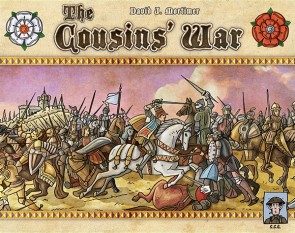 The latest in my series of reviews on super-creative games is live, and it's the best of the lot so far. So good, in fact, that I wanted to showcase it on Shut Up and Sit Down. It's Millennium Blades, the collectible card meta-game about playing collectible card games.

It's a super-intense real-time game which feels a bit like Galaxy Trucker and Space Alert. But I think it's better than either of those and mechanically it's full of innovation. The design is smarter and packed humour. It's competitive and there's never a dull moment as you flit from collecting cards and building decks to actually playing those decks in the simple tournament format. It's so engrossing that it's left me unable to wind down afterwards, and I've gotten scared of playing it too late in the evening. But I keep on doing it, because it's awesome.

So go have a read of the review: Millennium Blades on Shut Up & Sit Down.

Right now, I'm busy working on a book about tabletop games. I've kept quiet about this so far because I'm absolutely convinced I'm not going to get it done in time. That's still the case, but I've got far enough along that I feel there's a tiny chink of possibility it might actually happen. The main barrier right now is getting images for the publication: I'm having trouble tracking them down, even from publishers with the promise of free advertisers. If I do manage to get everything in place I'll let you know nearer the time.

Anyway, to focus on getting that done I've been putting aside games other than those that were already in the queue before I started work. So I've not got a whole lot else to report on in the gaming front at the moment, except for this review series. One thing I have made time for, partly because it's short, is a new game designed by an acquaintance from my local gaming club, The Cousin's War.

It's a game about the Wars of the Roses. It's a subject that game designers have struggled to get right, partly due to a dearth of historical detail on the battles. The Cousin's War, wisely, doesn't try. Instead it abstracts away much of the detail while trying to retain enough flavour to feel thematic.

Each turn players get a hand of cards. Inspired by card driven wargames, most of these have a points value and an event. A minority have a points value and a battle, instead, with a date and the starting forces - abstracted to cubes - for each side. The first action players take each turn is to play a battle card, if they have one, and the lowest date is resolved. Then they play event or point cards trying to build up their forces on the card.

Any surviving cubes at the end of the battle get dumped onto the dinky map of Britain that serves as a board. After five battles, the winner is decided by who has the majority of cubes in each of the three regions. Cubes shuffle round in a cycle from the supply, to a player's reserve and thence either to the main board or the battle. There's a limited number of cubes available, so balancing what goes where is a key part of the strategy.

The other key aspect is using your events. These are simple but work well in terms of historical flavour. There's a Warwick the Kingmaker card, for example, that allows you to increase your influence in each region, an easy but effective way of representing Warwick's political clout. Chaining the event and timing your plays are critical. One card adds two French mercenaries to battle, for instance, while another causes any French cubes to switch sides.

Battle is, odd as it sounds, resolved by a mini-game of liar's dice. Yet it works: all these disparate elements come together into a fast and fun re-creation of the fighting. And they feed off one another to make intriguing little strategic conundrums to consider. With just three regions and the potential for a battle to dump several cubes on at once, the game can be quite swingy. But that feels appropriate for the uncertain nature of medieval warfare and with games lasting less than 30 minutes, they hardly matter.

One thing that doesn't work so well is an odd system which triggers secondary events for the opposing player based on round number. Clearly inspired by Twilight Struggle, this rarely triggers. You save a card each turn, so it's easy just to keep a card that might trigger rather than hand your opponent a free event. Other than that it's a surprising amount of game in a tiny box. Hopefully in shops soon.

hotseatgames replied the topic: #249734 12 Jun 2017 08:04
Great review of Millennium Blades. I have had my eye on that one for a long time, and the only thing that has held me back is thinking it will be hard to get to the table enough to have it shine. Do you have an opinion on the sweet spot, player count-wise?

hotseatgames wrote: Great review of Millennium Blades. I have had my eye on that one for a long time, and the only thing that has held me back is thinking it will be hard to get to the table enough to have it shine. Do you have an opinion on the sweet spot, player count-wise?

Glad you enjoyed it. I think it's fine with anything 3+. Two players misses out on some of the card effects that chime in with different stuff going on in the other decks around the table. Some people find 4 or 5 players takes too long, but I find that a bit puzzling, to be honest. The bulk of the game is simultaneous action, so adding players doesn't add all that much time. Seems to run to a fairly predictable 2-2.5 hours in my experience.

I know fuck all about the publishing game outside academics, but does the publisher help you secure rights to images?

Also, if you need help with securing rights to images, LMK. I have a multitude of people that would very likely be willing to help.
Read More...