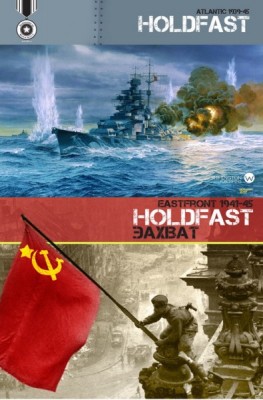 Game Name
Publisher
Worthington Games
Designer
There Will Be Games

Whatever happened to block games? Fifteen years ago, Hammer of the Scots was crushing all other starter wargames with woad-stained wood. Then, after a few more releases, it all went quiet. It's all the more mysterious because they're still around, and they're still awesome. Julius Caesar is a fascinating exercise in ancient armies. And it's not alone: carrying the banner into the future is the Holdfast series from Worthington Games.

The march began with World War 2 title Holdfast: Russia. It had all the block game staples. The pieces were chunky bits of wood you could stand on end and face away from your opponent for a simple fog of war effect. You know where the enemy troops are, but not what or how strong until you engage. Blocks rotate on their edges to show current strength and knock steps off each other via a simple d6 based combat system.

In most block games, there's a way to replace some of those lost steps between campaigns. In Holdfast they come from a pool of points, which varies for each side depending on the year and the weather. In a brilliant piece of abstraction, Holdfast uses the same pool for activation and attacking. This makes sense: getting a unit on the road or onto the offensive demands the same men and material as refitting. But it instantly puts the player in a bind: you can attack, or you can hold the line, but it's almost impossible to do both. The result is a high-stakes game of tactical poker, with each player looking to spot and exploit errors as hard as possible.

What made Holdfast: Russia so interesting wasn't the mechanics, but the map. It was small and plain and papery, like wargame maps often are. But it also offered quite extraordinary scope for maneuver. An easy to implement supply line system meant the game was all about keeping units in supply. The Germans could roll into Russia with relative impunity during the early turns. But as the supply lines stretched one way and shortened the other things became more difficult and dangerous. At some point, as the Red Army swelled in strength, they reached a tipping point.

It was, in other words, very much like the actual war on the Eastern Front. What many other games spent hours and acres of paper striving for, Holdfast: Russia managed in an evening and four pages of rules. Partly it managed this because of the way the designer stripped out all the baggage.  It’s like a scavenger removing everything functional from a burned out car and then using it to rebuild a go-kart. But partly, it also cheated a bit: it only went up to 1942. So, no Kursk, no Fall Blau, no Bagration.

The big draw of this new edition is that these are all now present in the form of new scenarios, and a time track that goes up to 1945. Oh, there's a mounted board too but the graphic design is such an eyesore that it's a bit like sprinkles on a turd. Forget how it looks, and get a feel for how it plays. The whole campaign isn't recommended: it's too long for a game where accessibility is a key draw. The others, though, are excellent. They offer the same fast-fire feel for history while giving the players a slew of new strategic challenges.

Holdfast: Russia was a niche triumph, and deservedly so. In fact, it deserved to break out of its niche and into the mainstream. That didn't happen, perhaps in part because the followup games were of mixed quality. Holdfast: North Africa showed that you can't adapt a system based on maneuver for operations along a narrow strip of habitable coast. Holdfast: Korea was better, but suffered from a turgid endgame where Chinese troops entered the map and slowed things to a crawl.

It's surprising, then, that along with Eastfront there are two new Holdfast titles based on navar war: Atlantic and Pacific. I jumped at the former, because it's such an interesting and under-gamed piece of history. It's also a very different beast from Eastfront. Although the blocks and the steps are still intact, almost everything else has changed. Combat is now a multi-round affair with submarines, aircraft and ships. Most critically, there is no real movement in the game. The board shows several large areas. Ships start each turn in place and can move up to two of these areas, providing they already control the first. In practice, that means most ships can reach most of the board most turns.

This does two things. First, it means that the game has a colossal element of bluff. Most board areas get crowded, and battles can swing wildly, because 1's on the dice disable a ship for the duration of the fight. There's also a combined arms element because aircraft are particularly brutal against submarines. So your choice of ships in a sector is as much if not more important than the sheer weight of steps you have there. Second, it makes control of the central board areas around Britain critical. It prevents the Axis forces getting out into the Atlantic and the Allied forces into the Barents sea, respectively.

At first, it looks as though the Allied player outguns the Axis. Especially with half the latter's ships trapped in the Mediterranean by the Gibraltar batteries. But although submarines are vulnerable to air power, they have a secret weapon: they can travel anywhere on any turn. And if they're not destroyed in the first round of combat they can sink, denying control of the area to the Allies even if they win against the Axis ships. This makes them a terrifying spoiler weapon, preventing the Allies from picking up victory points.

In another super smart piece of streamlined design, the points you get for each area vary by side. The North Sea, for instance, is worth a point to the Allies but three to the Axis. This is what makes submarines so effective: the Axis can creep into the lead by controlling a minority of areas but denying more to the Allies via subs. It's also a wonderful piece of abstraction. At first, the lack of convoys in the game felt disappointing. There are convoy units but, in practice, most move from the US to the UK for a few points with a minimum of fuss. The real history of subs and convoys is there, too, but it's hidden in those variable VP values. Fail to clear out the subs from the Atlantic and you risk big point swings, representing all those lost merchantmen.

It would have been nice to see some of this clarified in design notes. As it is, we're left guessing. But we're also left with another fast-playing, fascinating game that still manages a fair facsimile of history. It's not as good as Eastfront: the importance of subs, rolling 1's and the bluff element make it feel very chaotic. And assigning all the blocks to their sectors each turn lacks maneuver and  is a cluttered pain. But it's exciting, and even with a single scenario it's open to different strategies and tactics. Holdfast may have had a bump, but Worthington are right to keep pushing it. Block games deserve to be back on the radar, with these games in the vanguard.

DukeofChutney replied the topic: #255085 01 Oct 2017 20:04
I've got columbia's Eastfront, which i love the mechanics of, but it is a longish session for even a 6 month scenario (about 3-5 hours). My worry with Holdfast Russia is that i'd find it a bit too simple. Block Combat mechanics of themselves don't really grab me, i do like the hidden info obviously but most of the best block games bring something else to the party, even if it is just smart map design (Hammers main feat). How long does Holdfast Russia play? As for Atlantic, i've seen mixed reviews of this, but this might be because its a re imagining of the old AH War at Sea and some it misses some peoples expectations. I like the idea of a naval game, but i doubt my main opponent would be interested in it.

DukeofChutney wrote: I've got columbia's Eastfront, which i love the mechanics of, but it is a longish session for even a 6 month scenario (about 3-5 hours). My worry with Holdfast Russia is that i'd find it a bit too simple. Block Combat mechanics of themselves don't really grab me, i do like the hidden info obviously but most of the best block games bring something else to the party, even if it is just smart map design (Hammers main feat). How long does Holdfast Russia play?

Varies by scenario. Most of them take 2-3 hours. You can argue that it's too simple, but for all that simplicity it presents both players with challenging decisions each turn which are an acceptable facsimile for history. As either side it's all about protecting your supply lines, balancing offence and refits, how fast you can afford to advance and timing offensive and defensive moves with the weather.

If it can achieve that every turn - which I feel it does - simplicity is a boon, not a problem.

With a decade and a half of playing them, I think I've settled on my three favorite being Hammer of the Scots, War of 1812, and Julius Caesar. Hammer's a stone classic. 1812, I dig the simultaneous orders, beautifully hand-drawn map (maybe my favorite of all wargames), and simple rules. Julius Casear is a refinement on the Hammer system, and I will agree, has less flavor than Richard III or Crusader Rex, but it's just damn easy to play. I'd like to enjoy RIII more than I do, its a gorgeous game, but I don't play it enough so all the subtle unit differences and exceptions escape me each game.
Read More...