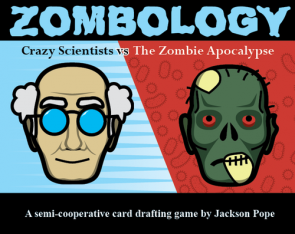 When Zombology came out of the packet, I thought it might have taken a knock in the post. There's no shrinkwrap, the box lid is a poor fit and all the cards spill everywhere when you take it off. Then I realised: when the designer told me this was "hand made", he meant it literally. He cut and assembled every component by hand, and that makes it an instant treasure.

Beyond the box, this is an impressive piece of production for a hand-cut game. My wife, a graphic designer who has only a passing interest in most of my games, felt compelled to praise the art and style. You'd never know the cards didn't come out of a machine. Looking at it, knowing it's made by hand gives you a feeling of how much the designer loves games, and this game in particular.

A first approach on the rules makes it hard to grasp where that love originates. They're short but a bit of a mess, masking what's actually a very simple game. It's a semi-cooperative game, a tragically underused design paradigm. Players are racing to find a cure to a zombie plague before an 8 turn timer runs out. To get one they'll have to work together, otherwise they all lose. But here's the ringer: only the person who actually plays the cure card is likely to get enough points to win. Does anyone else want to help them lay the foundations?

The mechanics are mostly straightforward maths. Most cards are cure cards with a colour and a number from 1-6. Each turn you play a card and, if it's a valid play, it goes face-up in front of you. A card is valid if it's a 1 or the preceding number in the same colour is already face up on the table. That's it: there's only one 6 of each colour and that's what you need to claim a cure. After your turn you pass your cards left and draw up.

Cue exactly the sort of deal-making and table-talking you might expect. Yes, I've got a yellow 3. Yes, I'll play it if you play a 2. And then everyone's in a quandry. You might think yellow is the best hope for a cure, but at game end, cards are worth their numeric value if they belong to a colour that reached a cure. So if you let someone play a 3 on your 2, you've handed them a point extra. And if you don't, well, you might have condemned the entire group to a loss.

The mind games reach their apogee when someone's about to lay a cure. That's worth 6 points, and everyone with 7 or more can claim a shared win. The eight turn limit to get six cards down makes time tight to get there, so it's all about who's going to benefit the most. Can you ride on the coat-tails with some low-cost cards to get in on that victory action? The card-passing makes it difficult, but it's not impossible. Or would you prefer to condemn everyone to get eaten, just because they stiffed you after promising they'd play a yelllow 3 to support your 3?

These sort of mind-games are par for the course for certain sorts of games. What makes Zombology stand out is both it's speed - you can teach and play in less than ten minutes - and those victory conditions. The group loss and joint win outcomes lend the social dynamics a complexity that's often absent in negotiation games. Often it adds extra layers of fun and bluffing, sometimes it collapses into frustrating guesswork. Whatever: it's so fast you can start over if you want, and the result is a unique experience.

Zombology would work quite well with the number cards alone. Of course, there are a slew of special cards too. Overrun cards represent a zombie attack, and let you force a player to discard their played card for the turn. Army based cards sit face-up and protect you from one zombie attack. Having either in your hand is a horrid dilemma. If you play it, you're not helping to build a cure or points for yourself. If you don't, you're passing it on to the next player, who might use it against you.

Best of all though are "payday" cards which let you recruit scientists. At first, they come from a central pool, one in each colour. They are very useful: their main ability is that they let you skip one in the number sequence of their matching colour. But they also let you snaffle the cards from invalid plays, allowing you to do a neat one-two of grabbing a failed card which you, yourself, can play. However, payday cards can also snatch scientists from the owning player, no questions asked. How early dare you invest in one, not knowing the most useful colour? How often dare you pass on a payday card, not knowing if it'll be the one to snatch your scientist and, with it, victory?

Of course there's no fixed answers to these questions. That's the whole point of Zombology, it's a super-speedy cloud of swings, roundabouts and double-dealing. There are a lot of negotiation flavoured filler games around, but I've never played one quite like this. Not only is it richer and deeper but it's more personal: and not just because it was made by hand.

(Due to the nature of production, you can't get Zombology in shops, but you can buy a copy direct from the designer).

Shellhead replied the topic: #257585 13 Nov 2017 17:43
Sounds like a mechanically decent game with a thematic mismatch that is only lightly applied.
Read More...