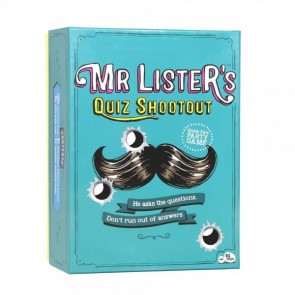 Boxes come and go from my house with solemn regularity. A few weeks back, though, something entirely new turned up: a crate. Not some half-assed fake piece of printed card but an actual wooden crate, complete with crowbar tied to the top. When I got home that night, my whole family were sweating curiosity from every pore. I could've used the crowbar to lever open the anticipation but, instead, I used it on the crate. And as the tension reached fever pitch the lid popped off and inside there was ..

... party games. And I was somewhat disappointed. But here's the funny thing. While my family tends to treat the arrival of yet more games at my house with contemptuous disinterested, this time it was different. They dived into the crate, heedless of the nails, and started pulling out straw and pretty boxes. With grim inevitability my youngest daughter was desperate to play a bright pink bucket labelled "DOOM" with a minimum suggested age of 16.

So we didn't play that, but we played a bunch of different stuff instead. I've never had such a willing audience for new games. Turns out these are part of a charm offensive by a publisher called Big Potato. They've been sending games to a variety of game reviewers, including Tom Vasel. But neither Tom Vasel, nor the enthusiasm of my family, make for great games. Here's the rundown on what we've played so far.

This is the first game I've ever seen with designer box wear: there are holes punched right through it. Inside: a bunch of question cards, a score pad, some pencils and a rubber moustache. Okay.

It's a trivia game that turns the essential concept of the genre on its head. Rather than asking one difficult question, it asks simple questions that demand lots of answers. The most-sold condiments, for example, or the blades on a Swiss army knife. Players (or teams) scribble down some quick answers and get to guess three each. Most correct answers wins, and each card has a tie-break question.

We found this really fun for a family quiz affair, for two key reasons. The most important one is that this is a rare quiz game where kids of almost any age can get involved. How old do you need to be to take a guess at the most popular cereal brands, for example? With everyone invested, everyone has fun. A smaller, but still neat, twist is that each card has a symbol on the back. To win the game you need to collect a set of different symbols, and that gives losing players a chance to get back into it with a lucky victory.

At first I didn't think this was a game. It consists of four neat stacks of square plastic tiles, each on a peg to keep them together. All four snap into a top plate that keeps them together. Assembling and dissembling the thing is oddly satisfying. As is the way the tiles clickety-clack together in the stack. In fact we took to calling the game the clickety-clack game.

The game itself is Connect 4. No, really. It's Connect 4 with up to 4 players and you have to get five rather than four in a row to win. There's no rack, obviously, instead you lay the tiles on the table but the principle is the same. I guess Connect 5 wouldn't have passed trademark law unscathed. I'm suprised the game as a whole did, to be honest.

Didn't know what to make of this box of angry rainbows. When I read the rules, though, I was not impressed. Having just played a game which was a repackaged Connect 4, I thought this one was a repackaged Dobble/Spot it. Each rainbow card either has two stripes in the wrong place or two stripes in the right place. Your job is to spot which they are before anyone else does.

So far, so ordinary. Rainbow Rage has a trick up its sleeve, though. You don't win by calling out the right colours, but rather by grabbing them from a pile of scoring markers. So there’s a speed/dexterity element a bit like Jungle Speed. Get it right and you get the markers to help build your own rainbow and claim victory.

Turns out that spotting mis-ordered rainbows is harder than it sounds. And grabbing for the markers in time is hilarious, a sweaty, spectrum scrum of joy. Make sure everyone you're playing with has cut their fingernails. Far more fun than you might expect.

As you might guess from the name, this is kind of like rhyming charades. The active player gets a card which demands they do one of three things: act out a clue, describe a clue without using the words in it, or an actual clue they just read out. The answer is always a celebrity rhyme, like “Bill Gates Spinning Plates”.

Folk seem to love this game. It’s got rave reviews all over the place. My family loved it too, although the kids struggled with many of the more obscure celebrities. But they seemed to want to play it more anyway, inspired by the lovable, quirky name. And it’s certainly true that the game is quirky. The rhymes are often totally absurd (“Helen of Troy eating Bok Choi”) which adds an air of surrealist humour atop the basic entertainment value of Charades and Taboo.

Personally, it didn’t chime that hard. There are party games with more skill than this, which are funnier than this, that are more family friendly than this. But hey, if it’s popular with other people and it gets them to play games with me, I’m happy. So it’s a win.