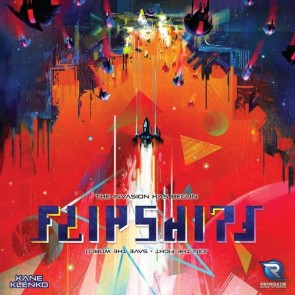 "Do you know what Space Invaders is?" I ask my daughter.

"Yeah, it's that really old video game with all the funny-shaped things."

It's close enough, so I let it slide. Flip Ships is like Space Invaders, I tell her. There are two rows of alien cards at the end of the table and we're working together to take them down. We've got to flip little cardboard discs off the opposite edge to try and hit them.

So we try, and it's chaos, a confetti of cardboard circles raining everywhere but where we want them. After missing every single initial shot, the aliens advance closer, becoming easier to hit, but more crowd up behind.

Closer to, we can start to make some kind of plan. Some aliens shield those adjacent. All of them advance at different rates and do different damage if they reach your table edge. We try and pick our shots on the most pressing targets. Most still miss.

This is the "training" difficulty level on which we can take 20 points of damage before losing. They don't last long. We lose.

I never play solo games, but I want to solo this. I want to practice, to find out how we were flicking wrong. I carry the game into the front room and lay it out on the carpet. It comes with a wooden launch block to balance your counters atop before flicking, meaning you can play on any surface.

At least that's the theory. Carpet stretches its efficacy to the limit. It's almost impossible to get the angle underneath for a good flick while you're sitting on the floor.

As I flick and the discs slide and roll everywhere, it occurs to me that the Space Invaders analogy is particularly apt. Not only does it mimic that feel, with the alien horde dropping menacingly toward you, but playing is a game of dexterity, not strategy.

That, combined with its punishing difficulty, is why it's fun to play solo. It also makes it a genuine co-operative game. No alpha player can help you here. When you step up to the plate it's your skill alone that matters and all your team-mates are counting on you.

I lose, of course, and by a bigger margin than my first game. But it was worth it, just to ruminate on how it comes together.

I solo it again, this time back on the dining table. I must be sickening for something.

Actually, all I want is the chance to try different flicking techniques at table level. I start out doing what we've been doing so far, whipping the index finger straight up beneath the counter, tip first. It lacks strength, but I feel like my precision is getting a little better.

Next, I try the same motion but with my hand the other way round, nail first. The crisp contact gives the shots more power, but what little accuracy I'd learned has gone. The aliens tumble down toward my city, their ranks undimmed.

I experiment with some other techniques. Sliding my finger up the wooden launch block, then sliding the knuckle up instead. Nothing gives me the correct combination of power and precision required.

And yet, somehow, as the cards thin down, I find myself close to eking out a win. I feel a tiny prickle on the back of my neck as I try to take the shots. If this were a movie, motivational music would be swelling in the background.

But this is real life, not Hollywood, and the aliens level my city to a smoking ruin. In desperation, I take to the internet and ask: how do you flip your ships? No-one replies. I presume it's a stupid question.

Daughter wants to watch YouTube videos on her phone, but I corral her into another game of Flip Ships. Every player gets a set of special powers and, in our first game, all of hers were to do with the Mother Ship.

This is a box that sits behind the main line of ships. It has a hit point pool, which varies with difficulty. Each ship you flip into the box lowers it by one and, if you don't kill it by the end of the game, you lose.

On the easiest level - the level we're playing on - it has a paltry two hit points. We haven't even hit it once, yet. So her ship powers were useless.

We cheat a little and I hand her some other powers that let you take out ships that you land close to, but miss. And we go to with our finger flipping action.

The first round, while all targets are at the maximum range, is an unmitigated disaster. We hit nothing. Several of the enemies are of a flavour that fall straight into the city, inflicting immediate damage. While this is terrible, it does at least unlock some more powerful ships for us to flip.

With more ships and closer targets, we begin to pick up hits. Our confidence grows. Now, we're managing to pick out the critical targets, the most damaging enemies, keeping our health from falling further.

With every shot, the tension mounts.

As the targets thin out, it becomes harder. The pressure builds and we begin to miss. The total falls, but it earns us re-enforcements. Every shot becomes an agony of anxiety. Every hit is cause for a little celebration.

Somehow, we survive, with about two health remaining. This buys us one full turn shooting at the mothership.

Daughter is up first. She's laughing a nervous laugh, babbling almost. The first few shots slide and roll across the table, skidding way wide of the mark. Then, out of nowhere, she nails it, a disc spinning in a beautiful parabola slap-bang into the box.

We're ecstatic for a moment. "You can do it!" I tell her, not telling her that I want her to do it because it'll take the pressure off me.

Of course, she misses the remaining shots. So it's down to me. She can't watch, actually hiding under the table like a terrified toddler while I prep my ships. I can't handle this. I'm convinced that even the tip of my flipping finger is sweating.

One ... two ... six. They're all gone. They all miss. There is much wailing and gnashing of teeth.

"I'm not trying again," she says, phone in one hand, earbuds in the other. "It's too difficult."

"Ah," I explain. "But this time we have a secret weapon."

Her nostrils flare with the scent of victory and I know she's in for another round.

I explain that, to my intense embarrassment, no lesser person than the game designer saw my plea online and took enough pity to point out the obvious. The glaring, self-evident thing that I'd failed to think of myself. That to get power and precision, you don't flip the ships, but flick them.

We try it with a few test shots. My first ship spins crisply off the launch block but goes high into the air, landing short.

Next, I try to aim forward a little, tilting my fingers to give it a shallower angle. This is better. With a couple more tries, I'm getting further than I have before.

My daughter finds it harder. She decides to stick to the one-finger flip. My initial salvo, for the first time, finds some targets. Hers all fall short.

As the foes push and jostle their way down toward us, however, we begin to work well as a team. Her short, accurate shots take out the nearest foes, while my flicked disks thin out the further ones. This stands us in good stead for a while, but eventually, ships find their way through. Our health drops. We get re-enforcements in recompense.

So I switch tactics. For closer targets, I use the one-finger flip. Now I can concentrate on an artillery barrage for the back ships and sniper shots for the front ones. This is critical because it lets us take out the most dangerous enemies, those with high damage or shielding.

To our amazement, we clear down to the last three ships with 11 health remaining. The rules say that on this penultimate round all enemies will attack and do double damage. At this point, we both realise that we can game the game. Double damage from those three ships wouldn't kill us, so we can safely ignore them all.

The sudden shattering of suspension of disbelief makes me sad. But daughter rallies me, reminds me we shouldn't cheat, that we have lives to save in the city below. Discs arc up, slap down with satisfying precision. Whether it was essential or not, the board is clear.

Now there is only the mothership. This, I feel, is down to me with my now-practised flicking action. In another perverse turnout, because we did well against the main fleet, we have fewer re-enforcements to shoot with. Still, I crouch and start flicking. The distance feels like an immeasurable gulf of starry space. The first few shots creep closer, closer, until ... bang! I land one.

One. Only one. It's down to my daughter to make the shot. I feel like hiding under the table but I grit my teeth and offer moral support.

Her first couple are way short. I encourage her to try the flicking action. The next couple make the distance, but way wide. She has one left. I realise that I'm biting my nails, a habit I gave up twenty years ago.

She can't do it. It's like dart-itis, the disc stuck to the launch post, fingers primed, unable to flick forward.

She takes a deep breath and unleashes a shot like a coiled spring. It flies straight and true toward the mothership, but it's too high. It starts to fall too early. smacks into the table a centimetre short.

And such is it's momentum it does something we've never seen before: it bounces. Straight into the target. She's done it.

We're not supposed to make noise this time of night, but we can't help but to cheer and dance a little victory dance. Without even asking, I start to set the pieces up for another round, a higher difficulty level with less health and tough enemies.

Daughter wrinkles her nose, tilts her fingers under the launching block. "It should be called Flick Ships," she observes.

May 18, 2018 (Updated: May 18, 2018)
Rating
4.0
Flip Ships
Critical hits: Dexterity makes an incredible basis for a co-op game that encourages skill rather than a bossy player. Lots of variety in game modes, player powers and enemy ships.

Critical misses: It's all about the dexterity, so look elsewhere if you want strategic depth.
MT
Matt Thrower #1 Reviewer 286 reviews