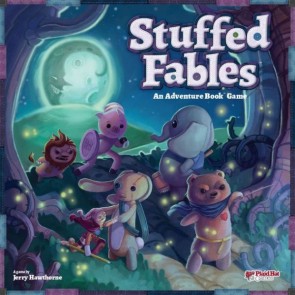 Children are not as foolish as adults sometimes think. I put three figures of stuffed toys in front of mine: a rabbit, a lion and a patchwork doll armed with a pencil. "Choose one to play," I suggest. They look suspicious.

One rummages in the pile of plastic from the box and pulls out a pig with a rattle. "Why can't I play this," she asks. I explain that this is a storytelling game that will unfold over many sessions. That we have to meet the pig in the story before someone can play him.

The other is harder to satisfy. She reads the side of the box. "It says four players," she points out. "Why are there only three characters at the start?"

I'm rumbled. Sheepishly I turn over the card and figure I've got hidden on my lap. Lumpy, a timid plushie elephant trying to hide a meat mallet behind his back. This isn't something I ever do: the kids always get free rein picking figures for games. But the moment I saw Lumpy I fell in love. He's mine. They grudgingly accept this.

In the grand tradition of childhood down the ages, Lumpy and his friends come alive each night when their owner is asleep. Their first task is to protect her on her initial night out of the cot and in a grown-up bed. My own kids, who can't remember the trauma it caused them years ago, think this is sickly-cute. But they kind of like it anyway.

They're intrigued by the "board" which is, in fact, a page in a big ring-bound book. On one side there's a grid-marked map where the figures move. On the other is a bunch of text, a mixture of narrative to read out and special rules for this scenario. On this page, they have to fight off some spider-like creatures made out of broken toy parts.

We're a family of arachnophobes. But they cope with the grim-looking things admirably. The fight introduces the base mechanics. You pick dice blind from a bag, then decide what to do with them. Certain colours of dice are only good for certain actions. It's a neat mechanic, which offers some basic strategy but leaves room for a lot of flexibility in how the game unfolds.

Black dice, though, are bad. They help the monsters move and act. Accumulate too many of them and you get a "surge" of extra monsters onto the board. My kids also don't seem to remember that this mechanic comes from Mice & Mystics. But it works better here because it's more neatly integrated into the other rules. They reach into the bag with appropriate trepidation and excitement, muttering little prayers to the dice gods.

We vanquish the spider-things and raise a cheer around the table before we disappear under the bed. We're investigating the source of a mysterious glow. To reveal more would involve spoilers, and in Stuffed Fables the story is half the fun, so we'll go light on narrative from here on it. Usefully, it's bedtime, so we pack up. Trying to pack the game away in a "saved" state is possible, but annoying. I scribble notes on a scrap of paper and toss it in the box.

Next session, we meet something new. Dark Hearts are little toys in anonymous helmets, with a literal gap in their stuffed bodies where the heart should be. I thought the spiders would be a challenge, but the Dark Hearts prove worse. My youngest quails, then bails, stating she finds them too scary. Her older sister and I divide up the characters between us and continue into the realm of the Nightmare King.

Shortly after, we have a jarring encounter with a massive heap of broken toys. The rules for this scenario use dice a bit differently to the main game. At first, we're elated by the creativity. But having to read and interpret on the fly slow the game down, sucks out some of the thrills. It's like being in the middle of a joyous book and having to stop to check some dry academic treatise on its author. We rush, and get the rules wrong, deflating the whole thing like a sad balloon.

In the next scenario, little sister reappears, baited by the rattling of dice and exclamations of joy. The rules were a little daunting for them at first, but now they're getting the hang of it. They're donned equipment, gained stats. Little hands go into the bag with more confidence, greater anticipation. And we notice that, as we play, we skip certain pages, certain paragraphs. We're instructed to add certain cards to the deck, but not others. What we're playing is kind of a Legacy game. By the end it will be ours, our game, our story. Except this is a Legacy game you can reset and play again, for another version of the tale, unique to you.

One thing they particularly like are the "lost", map icons on which you draw from a deck of other misplaced toys. Another player reads the card, offers a choice of actions, then reads the outcome of the decision. We end up carrying around a Koala, tired of walking on his stumpy little legs. He's pretty useless, but we love him because, really, how can you not love a stuffed Koala? He becomes like a party mascot. We carry him to the adventure's conclusion, beating our first boss monster on the way.

In the end, we discuss how we liked the game. The kids loved it. I wonder how much that super-flexible dice mechanic will last under repeat plays. It's both the core and the curse of the system, mechanically. Open, yet repetitive, and when the game really leverages that openness it is both wonderful and confusing. But to my surprise, the end paragraphs also include a family discussion point related to the story. As a parent, I love this idea. I love that the fantasy of a game gets us closer as a family, encourages us to talk about real life. "Do you ever resist changes in your own life," I read out. "Why?"

My youngest shakes her head with the easy confidence of no life experience. But my eldest is hesitant. I can sense there's something she wants to talk about but is finding difficult. Something she might not, otherwise, have told me. "Go on," I encourage. "What is it?"

"Well," she says. "Now I'm older, I have to do more stuff. I have to clean my own room. I have to make sure I take all the right stuff to school each day and bring it home. I have," and here her face sours like a twist of lemon, "lots more homework to do."

I try to explain that it's all about trust, about responsibility: things she's previously said she wants more of. She pauses again, collects her thoughts, then reminds me again that kids are cleverer than we imagine by uttering an incredible pearl of wisdom for her tender age. "Being an adult must suck."

ubarose wrote: I've been wanting to try this but I haven't been able to figure out if it is primarily a kid's game.

BillyBobThwarton replied the topic: #268077 23 Apr 2018 20:17
Regarding the moment where you are suddenly reading new rules in the middle of a new mission, I expect that would really trip me up in front of my kids... Are the rules tightly intermixed within the story, or are they in obvious sections that might allow me to get familiar with all the rules of a scenario ahead of time?

BillyBobThwarton wrote: Regarding the moment where you are suddenly reading new rules in the middle of a new mission, I expect that would really trip me up in front of my kids... Are the rules tightly intermixed within the story, or are they in obvious sections that might allow me to get familiar with all the rules of a scenario ahead of time?

No, you can't read ahead - at least not without spoiling the story. It is a problem with the system. On the flip side, it is very creative doing all sorts of different stuff with the base mechanics, and the standard rules apply in the majority of scenarios.

The eldest is really into the Hamilton soundtrack at the moment, and I'm really tempted to try and leverage it to get her playing Washington's War.

Jexik replied the topic: #272796 07 May 2018 12:24
Played through the first scenario (over multiple nights, with our schedule) with the wife and 7 year old son. We also divvied up the minis to paint. I too was instantly excited about Lumpy and his Eeyoresque depression, although I went with Stitch. Wife took Flops, and son took Theadora, who he called Teddy.

I agree that it's a great family game, and regularly tell people that it is "just about the cutest game ever." Sold very well in the shop, better than anything else in its first 2 month period.

WadeMonnig replied the topic: #296910 10 May 2019 14:27
My wife was totally psyched for this game. Which in itself is rare. We've played it three different times and I can not Express how bloody disappointing it is. And how disappointed she was. Stop and start gameplay, no legacy scoring sheets, boring with outbursts of confusing.
Read More...