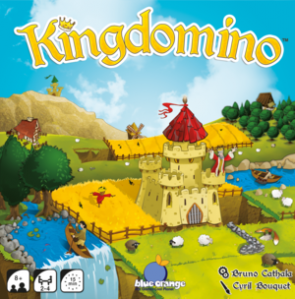 The box says "QUEEN DOM" on the side in huge marker-pen letters. A neighbour signed for it before my wife retrieved it and put it in the halls where my kids and their friends passed it as they came in from school. I wonder, with a thrill of horror, how many people think I've been ordering sex toys.

Twenty minutes later they care. At least the kids do. That's all it takes to unpack Kingdomino, assemble the cute card castles, read and teach the rules, set up and play to the end. The only snag is the dreadful rulebook, which makes a meal of its easy task. I reckon I can do it in a paragraph. Let's try.

Each turn you lay out two sets of land dominoes in rough value order, face up. Players take them in that order so if you get a less useful piece, you get first pick of the next lot. You add your piece to your growing kingdom, matching at least one end. After all the pieces are gone you score, one point for each square of a land type times the number of crowns in that area.

Okay, maybe rulebook writers don't get paid enough. But when you have the bright, chunky bits to demonstrate with, it's a cinch. The kids love the dominoes. They love the fairytale castles that do nothing but sit in the middle of your kingdom like a cheeky garden gnome. They love the game, which is so easy and so fast and yet makes you feel smart even if you don't play well.

It's better than sex toys.

You make exactly two choices in each turn. First, what domino to pick next turn. Second, where to put the one you've just picked up. Yet beneath this gossamer, there is surprising spatial alchemy. Where you slot the shiny extension in your jolly kingdom entails hidden sacrifice. Sometimes, making one area bigger means blocking off another. Sometimes, maximizing your score means sacrificing your perfect five by five square and your last play alongside it. Sometimes, it's better to take something you don't really need to stop someone else from getting it.

Simple choices, but they matter. There are variants, extra challenges for extra points if it all seems too neat and flyaway for you. And the whole thing burbles along on a cheery stream of randomness, not knowing what dominoes will appear a turn from now.

It's a box you can take anywhere, so long as you've got big pockets, so I start to. I play it with friends in a café, a kingdom rising and falling in the time it takes eggs to fry. I squeeze in a lunchtime game with unsuspecting colleagues, the gay castle pennants fluttering in a drab meeting room. 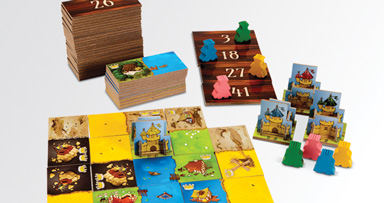 The real kicker though comes when I take it to see Graham. Graham is a mathematician and he's very good at games. He's also very good at talking nonsense. We sit, drinking, and discussing a range of topics from psychology to singing bowls to quantum mechanics as drunken old friends are wont to do. Then, as darkness creeps comfortably into the room, I pull out the box.

"Want to play? It's really quick."

His curiosity overcomes his inertia. And he beats me again and again and again, perfect squares with perfect scores falling out of his fingers like dust. So much for the kids' game.

This kind of makes a mockery of Kingdomino's supposedly grown-up cousin, Queendomino, which was also in the sex toy box. I have heard that the two combine well into one game, although there don't seem to be official rules for doing so in either one. First, though, it seems wise to taste the vanilla version. So I set it up one night with the elder daughter.

Atop the same structure as it's smaller relative, the game adds money and buildings. You spend one to get the other from a selection on sale and you put them on a new terrain type. It adds a little complexity and a massive slew of scoring options. The buildings give you all sorts of new ways to expand. Suddenly, blocking off parts of your kingdom isn't always the wrong thing to do.

Buildings go on from a random selection, but they remove all sense of randomness from the game. Now, whatever dominoes pop up, there are a dozen different ways you can translate the land into points. You can even crap on other player's plans by burning down buildings with a big-nosed dragon. It's simple yet captivating and I love it. Right up until the point the last domino slides into place.

We stare at our boards, baffled.

"I'm getting a calculator," says the daughter to my dismay. I like to use game scoring as an excuse to make her practice arithmetic.

"We don't need that," I state with confidence and start toting up her points. After about a minute, I've forgotten the running total. There's a scoring pad in the game, so I get it out and start again.

After another minute, she gets up and leaves. "Tell me who won," she mumbles on the way out, all her interest ebbed away. Mine is flowing fast. After another minute, knowing I'm alone and can be a hypocrite in private, I get out a calculator. By the time I'm done, no-one cares any more.

Still, there is Kingdomino.

My wife is doesn't play that many games, but the kids' enthusiasm persuades her to try. Soon, she's fitting in the pieces and toting up points with the best of them. All four of us sit at the table in the evening light, poring over our own puzzle, laughing and commiserating together over good moves and bad luck.  Bees buzz past the open door in the drowsy spring heat. Drinks get poured, snacks get crunched, dominoes slide across the tablecloth.

There are no dice. No tech trees. No wars get fought, no deals struck and no civilizations conquered. Yet, sat in my little pink fairytale castle, I am profoundly happy.

May 18, 2018 (Updated: May 21, 2018)
Rating
4.0
Kingdomino
Super accessible, but with enough under the hood to challenge and engage, this is a welcome throwback to the classic era of "German" games.
MT
Matt Thrower #1 Reviewer 286 reviews


Am still looking at the Age of Giants expansion, which sounds interesting.

Jazzbeaux wrote: Sounds like I should stick with Kingdomino then. No need for Queendomino.


Am still looking at the Age of Giants expansion, which sounds interesting.

Yeah, Queendomino isn't bad, exactly, but the scoring is awful and it's in an awkward spot. Accessibility is a huge part of Kingdomino's appeal: if you take that away to make a more medium-weight game then, really, you're better off just choosing a medium-weight game. There are plenty around.

Even if you just use the dominoes in Queendomino as a "5-6 player expansion" for Kingdomino - which you can - it still just extends the play time past the welcome point.

Age of Giants is potentially going to suffer from the same problem. It will indeed be interesting to see how it turns out.

I mean, it's not great for any game but I'll live with it on super heavy stock market euro or whatever.

Sagrilarus replied the topic: #273812 21 May 2018 12:10
I've argued here plenty that expansions get made for games that don't need them. Games that are wildly successful without them are a great choice for expansions from a publisher's perspective, but the games are successful (particularly in the euro genre) because they're clean, simple. No expansion can improve on clean and simple.

Games that struggle to work can be aided with expansions, but what publisher wants to sell to a struggling title? Indeed the publisher's incentives are a mismatch for the purchaser's.

Kingdomino sounds like the title of choice here, without the add-ons. I've heard the name plenty, but this is my first look at more than that. Thanks for the simple, clean review that hits the salient points.


It's better than sex toys.

Whoa there bud -- take care stepping outside your core competencies. That's a debate best not had on a geek website.

charlest replied the topic: #273815 21 May 2018 12:21
As a counterpoint, my one play of Kingdomino was very lackluster. It felt too inoffensive and uninteresting to even register. I haven't played Queendomino and probably never will, but I don't understand why anyone would choose Kingdomino over Carcassonne - unless perhaps you were playing with children who couldn't grok the farming rules.

charlest wrote: As a counterpoint, my one play of Kingdomino was very lackluster .... I don't understand why anyone would choose Kingdomino over Carcassonne

This is a really good question. Aside from the fact I'm not over fond of Carcassonne, I did talk about this a little bit in the Patreon post I made along with the review.

The biggest reason is that even compared to Carcassonne, Kingdomino is ridiculously easy to play. A surprising number of non-hobbyists I've taught don't take to Carcassonne because even though it's simple, it's unfamiliar. If you've only played Monopoly and Game of Life, Carcassonne is like some freakish foreign land.

Kingdomino though? Everyone knows dominoes and everyone knows how to multiply. Job done. Plus it plays in 15 minutes as opposed to 30-45 for Carcassonne. There's more of a sense of immediate gratification as you watch your kingdom grow instead of the will-it, won't-it use of followers. It scales better, too and yet I don't think it has less strategy than Carcassonne. It might even have a bit more.

Having something which is that accessible and easy and yet still has the potential to satisfy a gamer (I know it didn't satisfy you, but you can't please 'em all) is incredibly rare. That's what makes it a four star game for me.
Read More...