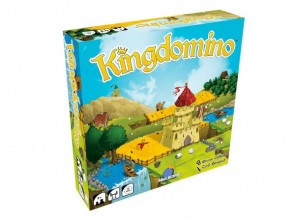 Players take on the role of Lords seeking new lands to expand their kingdom. As with 'Dominoes', these new lands must match the landscape tiles that have already been played. You need to create large areas of the same landscape type. But these will only score points if there is at least one crown on a tile. Points for each landscape type are calculated at the end of the game by multiplying these two together: so the number of squares times the number of crowns. Before this however, you’ll need to pay attention to your choice of tile, which decides the order of play for the following round. Taking a good tile now means you’ll play later next time. Each round presents the players with new important decisions as to which tile they should take.

Sheriff Of Nottingham
3.0
V Vysetron
"On the one hand the game is mathmatically busted. Telling..."