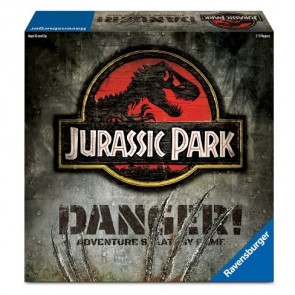 Please retain a firm grasp on your hindquarters.

Like a Velociraptor, Ravensburger's Jurassic Park: Danger came from out of nowhere. And it's a strange release, only available at the moment in US Target stores for $24.99- sorry, world. Designed by the Forrest-Pruzan Creative group, who also brought us last year's Harry Potter: Hogwarts Battle, it's a Survive!-inspired game that is very firmly and specifically based not on this year's entry in the long-running dino disaster franchise, but on the original 1992 film. Virtually every character from the film is playable in the game, which means that every play will be basically Ian Malcolm and whoever decides to join him. Once the argument over who gets to be the ersatz Jeff Goldblum subsides, then you have to work out who is going to play the dinosaurs. It's all-against-one as the humans try to activate three locations (the Maintenance Shed, Control Center, and Visitor's Center), accomplish a personal goal, and escape via helicopter. It goes without saying- "hold on to your butts".

Isla Nublar is represented by a modular hex board that forms a sort of maze-like arrangement of cliffs and fences. The players start in the middle of the island and the dinosaur player has three starting positions for his or her three dinos - a fast-moving Velociraptor, a spitting Dilophosaurus, and of course an extra-chompy T-Rex. On each turn, the human players select a card from all ten of their character-specific action cards. The basic actions are run (a hex-to-hex move), climb (the same over a cliff or a fence), and sneak (which lets you disappear and reappear elsewhere). Climbing and sneaking require a little skill check to succeed and you can discard cards to boost your roll. The dino player also selects an action card with these options sans skill checks, but his or her cards have multiple actions on them so that more than one dino can take action on a turn. And each turn, the dino player can use one special action. The Raptor can charge two spaces, the Dilophosaurus has its trademark ranged attack, and the T-Rex bites twice.

The human players' health is essentially their hand of ten cards, and when a dino attacks by winding up in the same hex as dinner, they simply "burn" a card from their hand. There is no reshuffle. In a very Gloomhaven-y mechanical turn, you only get your cards by burning what is left in your hand and retrieving your discard pile. Exhaustion is a very real concern here, and the humans can feel quite fragile as their options dwindle over the course of the game.
But the tide can turn with smart play and clever use of the tools at hand. There are out-of-turn Distract cards that some characters have that may be played to lure an attacking dino away from the kids or that sleazy lawyer, if you have it in your heart to help him avoid his undignified end in the film. Activating the three locations, each of which require a 5+ skill check, also has a game state effect. The Control Center locks down all of the objective spaces so that dinos may not enter them, the Visitor's Center gives a card replenish, and most significantly the Maintenance Shed which turns on all of the electric fences on the island and makes them completely impassable.

But even if the humans manage to activate all three sites, they all have a personal goal (another odd, faint echo of Gloomhaven) they must complete. Dr. Grant has to successfully distract the T-Rex at some point. Ellie has to visit the sick triceratops. Tim Murphy has to go to the Brachiosaurus space. All things direct from the film, and all things that make playing each of the ten characters fun and unique. It also creates a decent sense of stress over the course of the game as players scramble to meet both their personal goal as well as aiding the group in completely the primary objectives.

If it is not already abundantly clear, what makes Jurassic Park: Danger successful is that it completely plays to the narrative and themes of the film. This game is a total victory for big fans of Jurassic Park both young and old, and I think the designers made a lot of excellent choices in terms of creating a exciting and accessible game that has quite a bit more depth to it than you might expect.

However, I also feel like this game comes with the same caveat that came with Thanos Rising, which I reviewed last week. And, in fact, it's also the same thing that pushed me to rate Hogwarts Battle and Doctor Who: Time of the Daleks perhaps a little higher than I would without their licenses. My goodwill toward the Jurassic Park IP steers me away from some of the harsher criticisms I might otherwise levy against the game. I think this is the best Jurassic Park game we are likely to ever get, and it is a good one, but I'm not sure I'd be so kind toward it without the close connection to the subject matter.

The human game is definitely shakier than the dinosaur half of it. A sensible dinosaur player can just completely stroll to victory and I think there is a rather shitty patch for that issue- you just pick another character if someone is eliminated. There is also the issue that the humans gradually lose flexibility as they lose cards, wihich makes the later game feel especially repetitive and even restrictive. It's very possible to hit a no-win situation mid-game, but you may not realize it until you've already played down to the last couple of turns. I'm especially not fond of how you can make it a location, fail your roll, and then you are forced to move away. I suppose it makes sense contextually, but it can also lead to a feeling of frustration and wasted turns as you repeatedly try to get the 5+- and I like the "die roll that wins the game" thing.

There is also a serious scaling issue. With less than four players, the dinosaur player wins. This is easily alleviated by players playing more than one character, but then I think that the accessibility suffers and the game becomes somewhat over-thinky for what it is. But then with four or five, it can feel more sluggish than you want this 45-60 minute design to be.

So, it's a good Jurassic Park game. There's fun here, the value is good, and the production is decent for a $25 mass market title. With friends or family that love the movie, I can pretty much guarantee that a minimally satisfying experience is available here despite some wobbly design and a badly written rulebook that somehow makes learning to play more difficult than it should be. Considering that the alternative in days gone by would have been a game where every player gets to be Ian Malcom, it at least upholds the trend that licensed games don't have to be garbage if they are thoughtfully considered and respectful of the source material.

Michael Barnes replied the topic: #274908 07 Jun 2018 13:11
Because if Ravensburger sends me the review copy I requested before I just broke down and bought it I will send it to you at no charge as hush payment.

Michael Barnes replied the topic: #274910 07 Jun 2018 13:39
Check stock online before you go. Some Targets have had it for weeks, some still don’t have it. It looks like stores are getting 4 copies each, and they are stuck in the section where they have Exploding Kittens and Cards Against Humanity.

Shellhead replied the topic: #274912 07 Jun 2018 13:47
Excellent review. Very nuanced analysis of theme (ok, setting), mechanics, and strategy. For the price, it sounds like a good game, but nothing that I really need.

Jexik wrote: Interesting. This sounds great, and like one of the few one vs. many games where it'd pay off to have the kid play the 'bad' guys. What 8 year old doesn't want to be a bunch of dinosaurs? How much text is there on the cards?

My 6 year old son can play the dinosaurs, almost no text on those cards. once you explain what each dinosaur action, and what each dino card do he's golden. my 8 year old can play the humans, there is some reading on the individual characters cards.

WadeMonnig replied the topic: #274950 07 Jun 2018 23:22
"However, I also feel like this game comes with the same caveat that came with Thanos Rising, which I reviewed last week. And, in fact, it's also the same thing that pushed me to rate Hogwarts Battle and Doctor Who: Time of the Daleks perhaps a little higher than I would without their licenses."
I believe you meant Doctor Who: Time Clash

ubarose replied the topic: #277583 15 Jul 2018 10:40
We played this last night. I feel like this is a top notch family game, and am going to be recommending it to my boss who has a couple of kids who are getting tired of pandemic and want something a bit more confrontational, but a wife who doesn’t like all out competitive games.

repoman replied the topic: #277635 16 Jul 2018 05:40
I liked it well enough and think it would be good for a group of dinosaur loving kids. There are imbalance issues but a kid won't notice. The end game is kind of a suck but, again, a kid wouldn't care.

As an adult, as I like Jurassic Park and dinosaurs but am not a uber-fan-boi of them, I don't need to make excuses for it. There is no reason I would ever choose this game over Survive.
Read More...