Fate of the Elder Gods Board Game Review - Destined to be good? 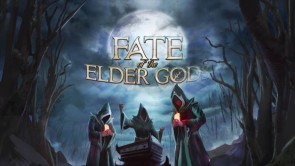 One of the higher design aspirations of the last couple decades of board games has been finding a way to fuse the elegance of so-called "Eurogame" mechanics with the flavor and theme of so-called "Ameritrash." The former are games that follow the German trend of the 90s that introduced things like Settlers of Catan and exposed much of the world to designers like Reiner Knizia; well-known for his games that played in interesting ways, but with themes that were, at best, pasted on. The latter are games that followed the British and American trends of the 70s and 80s, with standouts like Talisman (and pretty much everything else that Games Workshop produced) that were heavy on theme and story, but often short on gameplay other than "roll the dice and hope for the best." Entering this century, a number of publishers made attempts at fusing the two. Fantasy Flight was one of the more notable ones, with Twilight Imperium, 3rd edition blatantly borrowing the role card function of Puerto Rico and Chaos in the Old World hailed for its fascinating adaptation of Games Workshop's fantasy universe into a system of victory points and card placement.

That trend has continued and one of the latest examples is Greater Than Games' Fate of the Elder Gods. The mechanic of worker placement (putting one of your pawns in a location that enables an action for that turn) has become somewhat routine to a lot of gamers, especially since other than denying your opponents access to that location, a lot of WP games can function without the direct player interaction that a lot of people want (the "multiplayer Solitaire" phenomenon.) Fate of the Elder Gods takes the "interaction" angle much farther than other games by having more than one of those placement actions directly affect your opponents' workers and their overall strategy. You won't be able to win this game by simply sitting in a corner and doing your own thing. You're going to have to get into the streets (of Arkham) and slug it out a bit. 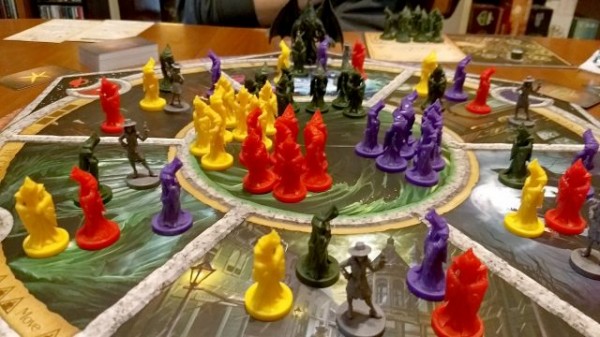 Each player in Fate of the Elder Gods is trying to summon one of the Elder Gods of Lovecraftian Mythos by advancing a token on the Summoning track on your Lodge (player sheet.) Whoever reaches the end of their track first, wins the game. Each god has a different ability that can be activated by one of the six spaces on the board, providing diversity in replays beyond just card draws. On your turn, if you have a Spell card in hand with a symbol on its back that lets you move to a particular space, you place that card and then move one of your Cultists from your Lodge to that space and activate the ability. For example, moving to The Library lets you draw 3 Spell cards. If you have at least 3 Cultists there and more Cultists than any other player, you can activate a second ability. For example, you can sacrifice one of your Cultists at the Library to ready a spell at no cost. Howevah, every time you activate a location, the game places an Investigator there. Once there are at least three Investigators present, they all automatically move to your Lodge if you activate that space. If there are enough Investigators on your Lodge, they'll Raid it and try to place Elder Signs on your Summoning track. If enough Signs build up there, you lose and the game ends. Whoever has the fewest Elder Signs on their track, wins the game.

Key to gameplay are the aforementioned Spell cards. They all have symbols on their backs that allow you to place your Cultists at the different locations. But those symbols are also used to pay the costs of casting spells. Once those costs are paid, the spells are "readied" and can be cast at any time, including other players' turns. You can have three readied spells at your Lodge. Spells can range from re-rolling dice to cursing other players to advancing you multiple places on the Summoning track. The resource management aspect of the game comes from deciding whether to use the cards for movement or keep them for their spell ability and figuring out which symbols might still be present at each location when you decide to move there (all of them get discarded when a player uses them to cast a spell.) There are dice involved, mostly used for Raids and determining the result of sacrifices. They end up serving a dual role of both enabling risky wins and preventing inevitable losses, as the randomness allows a chancy strategy to succeed and prevents Investigators from being abused to just stonewall opponents.

That was highlighted in a game we played in which my approach was to complete my Summoning track, while one opponent attempted to exploit the Investigators to build up Elder Signs on his opponents and try to end the game with the fewest. The third player navigated a middle approach, taking advantage of our more narrow paths to victory and trying to snag opportunities when they were presented. And there are many opportunities. The variety of spells in the game, the presence of artifacts (including Lovercraftian favorites like the Necronomicon and the Amulet of Nephren-Ka), Curses that can be played on each other, and the different powers of the various gods means that the myriad of interactions will reward both the careful player and the one just looking to see a good story unfold. That game came down to a die roll for victory and the destruction of humanity, but each of the other players would have had a chance to win in the avoided apocalypse on the next turn or two. 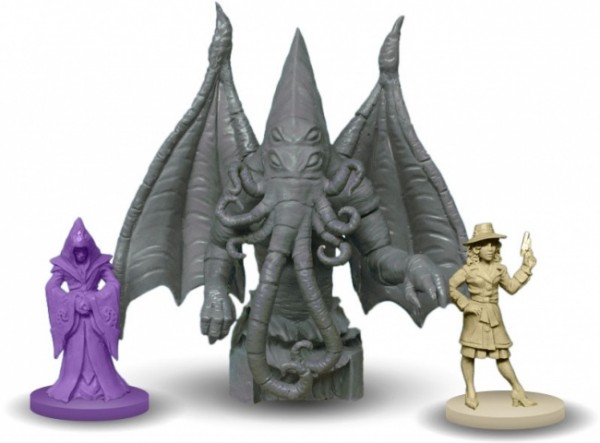 Obviously, the theme is present. You really can't miss it when you're leading a cult dedicated to Tsathoggua. But the artifacts and appropriately moody artwork on the board and Elder God sheets and nicely-crafted Cultist figures keep you in the mythos frame of mind. I think the Investigator figurines are a little closer to the camp side of 1930s pulp, but they don't seriously break the image. I also found the Spell cards to be a little plain, but there's a great deal of info packed into the face of each one (sometimes extensive spell text, plus symbol costs), so it's understandable. The use of symbols for all the basic functions of the game (identifying cards, pieces, game actions like exhausting or discarding, etc.) was a smart choice, as well.

Gameplay will probably start slowly. It took us a few turns before we got the hang of identifying how to really use the cards and both anticipate and respond to our opposing actions. That strikes me as a sign of depth, moreso than complexity. The system is pretty straightforward. There are simply a lot of decisions to make at any given moment, which could lead to the dreaded analysis paralysis for some players. But the upside to that is that no path seemed entirely one way, such that players couldn't shift strategies when opening presented themselves. As noted, our Nyarlathotep player kept her options open for much of the game and was in a good position to pounce near the end, but came up short on casting ability for a key spell. As with all games like this, some of it will simply come down to how the cards are drawn and played.

Is this a storytelling game akin to other Mythos things, like Arkham Horror? No. Gameplay is stripped down enough to prevent text overwhelming motion. Our first game lasted a bit over an hour and future games will go much faster, now that the Spell card system is familiar. I think it's worthy of many future plays and I'm already looking forward to playing Hastur, the King in Yellow. After all, the board is indeed a flat (almost)circle...

Jackwraith replied the topic: #277430 12 Jul 2018 22:28
Deal. If you can find a copy, I'm in. It's all about those early cheap properties (purple and light blue) ruining people when they've just gotten their weekly dole. Slumlords unite!

Pat II replied the topic: #277480 13 Jul 2018 15:58
I played this a couple of weeks ago and enjoyed it. It wasn't too complicated or fidley and even I understood the mechanics fairly quickly on the first play. It was quick too so it didn't overstay it's welcome.
Read More...